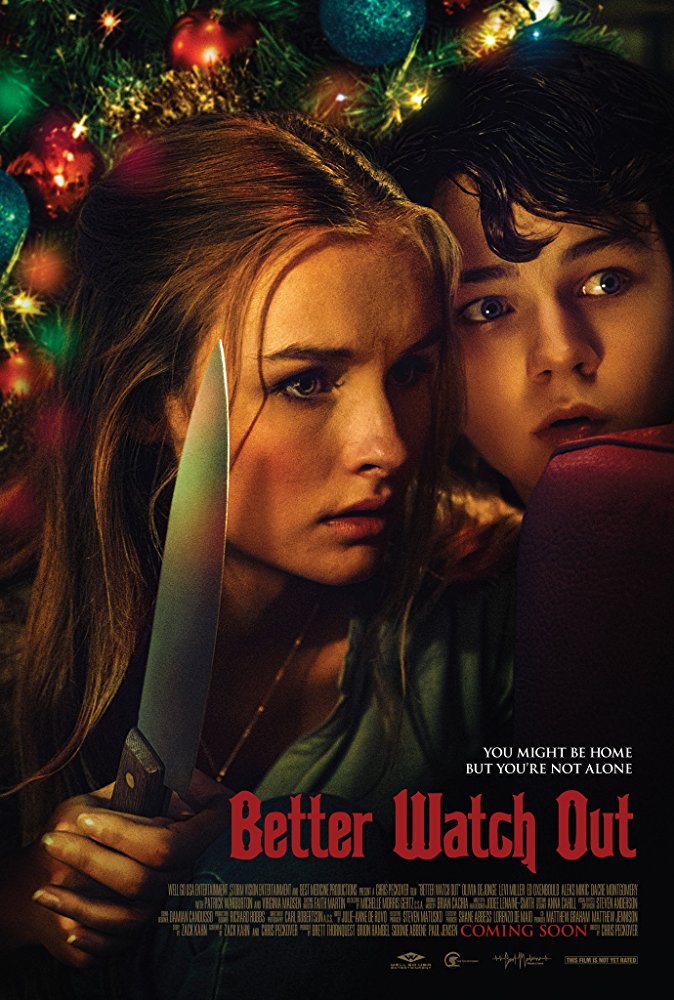 We recently sat down with writer/director Chris Peckover to discuss his incredible cast, tapping into the mind of a preteen, and why filmmaking is similar to brain surgery.

TrunkSpace: What has your overall journey with “Better Watch Out” been like, because from our understanding, it took some time to get where you are today with it, right?
Peckover: Oh, yeah. I haven’t even talked to anybody about how long it took to get made. I started working on the script in 2013, so it’s been a long journey. Unsurprising and unrare in movie world. Just from finishing the movie last June, it’s finally coming out, what, 16 months later?

It’s been fun. It’s been fun seeing the movie find its feet with audiences, and considering that it premiered at Fantastic Fest last year, it’s really been gaining steam over the past year as more people have watched it and have been talking about it. I feel like I might not get to see something like that happen again, where people are still talking and excited even more.

TrunkSpace: And your cast is stacked with these incredible young actors whose own careers are blowing up. They all have these huge projects coming out, which in a way, really extends the shelf life of your movie.
Peckover: You’re right. We shot the movie in Australia and we have all Australian actors. The only two non-Australian actors were the two parents, Patrick (Warburton) and Virginia (Madsen). In hindsight, I think we found the four best teenage actors in Australia at the moment. Very, very lucky.

TrunkSpace: Levi Miller knocked it out of the park with this amazing mix of innocence and lock-your-door-crazy in his 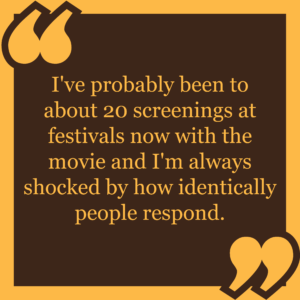 performance. Having him as part of your film must have been a gift to your vision.
Peckover: Dude, in hindsight, writing a 12-year-old character who had to hit so many different parts of the spectrum, we were really shooting ourselves in the foot thinking that we were going to pull that off. We read about 200 boys for the role and Levi was the only one…

I think it’s going to be hard to express just how rare what Levi was doing was. He’s the only actor of everyone who we read, of all 200, who brought this creepy sexuality to his role, which was so important because our movie is about this 12-year-old, weeks away from turning 13, and he’s finding his tastes. Finding what he likes. The premise of the movie is that he wants to hook up with his babysitter before she leaves for Pittsburgh, even though she’s 18 – way older than him and yet he wants to try to kiss her and so on.

A lot of the 12-year-olds who we read, they were either playing him cutesy or just mean and devious. Even in the audition room, Levi brought this sexuality that you just don’t see in 12-year-old boys. 12-year-old boys are not thinking that. They’re certainly not putting themselves out there like that in front of a bunch of adults and a camera. That’s literally the most terrifying thing you could do as a teenager and yet he oozed this confidence. Nobody else came close to that.

TrunkSpace: And the great thing about the part is, it wasn’t only a gift for you. This role has probably allowed Levi to be seen in a way that he never would have been seen before. It felt like a game changer for his career in terms of future role possibilities.
Peckover: With “Pan” and every movie I have seen him in, he kept playing this same character. It was the awestruck boy. “Oh my god, this is amazing! I don’t know what to say!” And listen, it was through no fault of his own. A lot of people write 12-year-olds as this window into some new world. 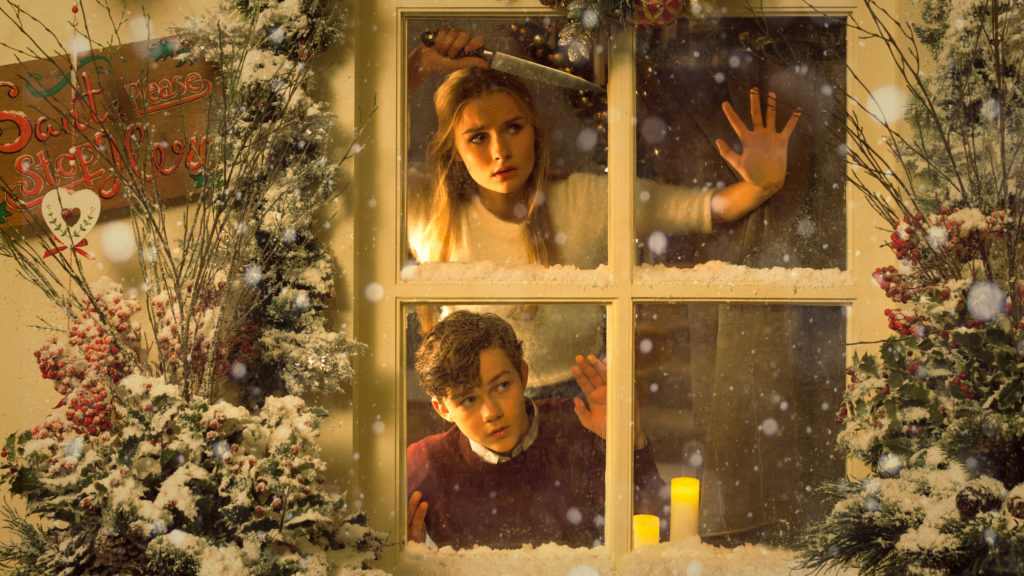 TrunkSpace: As adults we forget what it’s like to be that age.
Peckover: You forget that when you’re a 12-year-old you’re dropping F-bombs constantly, you’re thinking about sex and drugs and loud music, and as soon as the parents turn their backs, you’re a totally different person. I was definitely one of those kids. (Laughter)

Around sixth or seventh grade, I feel like everyone has this feeling where it just hits you suddenly. You’re like, “Oh my god, adults don’t realize how much smarter I am than they think I am. I can get away with murder. They don’t know it.”

In fact, when we first all got together and read through the script together, I remember asking Ed (Oxenbould) and Levi, “I don’t know if I’m getting this right or I’m just remembering it incorrectly, but this movie is about how adults patronize 12-year-olds and don’t really treat them at their maturity level,” and they both slammed their heads against the table, like, “Yes!” It was nice to know that the movie would strike a chord with even kids their age. Especially in movies, they’re all very proper and tidy and boys.

TrunkSpace: With the film due out on Friday, does it feel like you can finally step away from it creatively? Does it feel like it’s finally off your creative plate, so to speak?
Peckover: When it was locked, it became very clear that there was not any money to do anything else and it was done. It’s never been a burden of, “Oh, I wish I could do this, I wish I could do that,” because really, and this is a testament to the producers for really trusting me, but if anyone asks, “So when’s the director’s cut come out,” this is the director’s cut. I got everything I wanted.

That being said, I’ve had plenty of burden in the past year and a half because I burdened myself. I’m OCD about everything. It’s like, “Okay, the baby’s been born, but is it going to walk out of the house without banging its head against the wall?” I’ve been trying to help guide it some, but really, there’s nothing I could possibly do to really have any major effect on how it’s accepted now. Now it’s outside the house. I get to watch from the window, gripping the curtain, hoping he crosses the street okay.

TrunkSpace: Sticking with the baby metaphor, you actually got a chance to have few play dates with the film before seeing it go off on its own because you did the festival circuit with it, right?
Peckover: Yeah, I’ve been to a ton of festivals. I’ve watched it in foreign languages with subtitles in foreign countries. Something that really surprised me was, it’s always a little scary doing a movie that’s tonally mixed like this where it’s funny, but then sometimes it’s really horrifying, and then sometimes it’s just thrilling and exciting and adventurous. And then other times it’s really taboo and uncomfortable. We did a bit of a rainbow in this movie, and the fear is, depending on the audience, it just totally has different effects on people.

I’ve probably been to about 20 screenings at festivals now with the movie and I’m always shocked by how identically people respond. Any filmmaker is really anxious and afraid of, “Am I worth spending money on and can I make a good movie?” It really boosted my confidence watching people watch this movie. When I intended for people to laugh, they laughed. When I wanted them to be quiet, they were quiet.

Before I was going to be a filmmaker, I wanted to be a brain surgeon. It’s kind of the same thing. Where you’re using a scalpel and you’re crafting, you’re saying, “I’m going to make people think this and I’m going to make people think that.” It’s so rewarding to be in an audience and to be just watching this organic collection of unique people and yet they all get in line and react the way that they were intended to react. It’s really “muahahaha” powerful.