This time out we’re chatting with Chris Mul, writer, director and producer of the new horror film “Astral” to discuss on-set happy accidents, the reason he can no longer watch the film himself, and why his dream project requires a much larger budget.

TrunkSpace: As you gear up to the official release of the film, what emotions are you juggling with?
Mul: It’s exciting to finally see audience reactions to the film, although undoubtedly there is some apprehension regarding what people feel about the project. As a creative and storyteller, you are constantly battling those emotions. Regardless, it is nice to be at the final hurdle, as we have been eager to share this with everyone.

TrunkSpace: “Astral” is your directorial debut. You also also co-wrote the script with your brother, Michael. As you two developed the script and began to write, did you try and adapt it in such a way that enabled you to more easily shoot it? Was that always in the back of your mind?
Mul: I think budget is something in everyone’s mind when you are first starting out. Whilst it’s definitely true that restrictions breed creatively, I think it’s wiser to find the story first and shape that around the budget you have. The producer in me is always telling myself and Michael, “Write to a small budget,” although thankfully he talked me round and we simply adjusted to meet what we had.

TrunkSpace: As far as Director Chris is concerned, did you accomplish everything you set out to do with the film when you were prepping for production? Were there any creative compromises that you had to make because of budget or time?
Mul: With careful planning, you can allow for those “happy accidents,” as you have usually prepared for the worst. With that 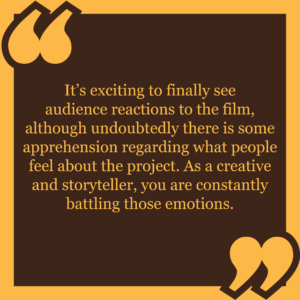 being said, the final clairvoyant scene was perhaps my greatest compromise. We had about twice the material written down, from what we shot, and had to creatively find a way to maintain the intensity without the added substance. Despite the compromise, it’s definitely the scene I am most proud of.

TrunkSpace: Is it difficult to step away from a project, embrace the fact that it can’t be improved upon any further and then release it into the world? Creatively, can it be difficult to let go?
Mul: Every single day. I’m now at the stage where I can no longer sit in on screenings or re-watch the film, unless totally necessary. To me, on a personal and creative level, there’s a list of things I wish we could redo or change. Above everything else, it is nice to finally see the film into completion and be able to share it with an audience – to allow it to be judged on its own merits, and just learn creatively from the process.

TrunkSpace: How long was the journey for this particular film from inception to completion? Was there ever a point where you thought it might not happen?
Mul: We were actually far more fortunate than most on that front. We ended up having a bulk of the finance before even finishing the script – as our contacts and opportunities stemmed from our work in corporate filmmaking. I feel very lucky to have been so fortunate, and once the ball started rolling, everything just seemed to go from strength to strength. In all, we began in January with the script and structure, and were shooting in August – so a pretty quick one by feature film standards. 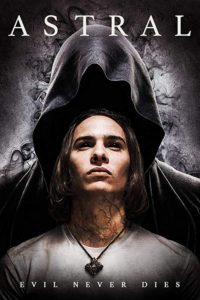 TrunkSpace: What is the biggest lesson that you learned in bringing “Astral” to life that you will apply to every project you work on in the future?
Mul: I think that would have to be the importance of forging strong collaborative relationships. When you’re shooting on smaller budgets, you have to have a complete faith in those you choose to surround yourself with. We were moving so quickly across the 12 days we had, that you have to believe in the people helping you to achieve the goal. That, and casting! We were very lucky to have Alice (our Casting Director), who helped us secure the plethora of talent we were fortunate enough to have worked with.

TrunkSpace: What are you most proud of with your work on the film?
Mul: I would have to say the tone and pacing of the film. We set about with a view in mind, and purposely chose to steer away from the generic genre clichés. That allowed us to create a slower burning psychological thriller, which is grounded in reality and emotional beats. Although there are a number of things I wish we could redo, that pace and tonal aspect is definitely something I am proud of as a storyteller.

TrunkSpace: You always hear these amazing stories about how a scene had to be adapted on the fly because of budget or time, and in the process, a cinematic gem was then born. Did you have any moments like that where having to think on your toes brought about unexpected results?
Mul: Definitely! The first example I always think of is our clairvoyant scene. We had two days to shoot that scene and realized something wasn’t working after a few hours. Thankfully my producer, Christos, took everyone who wasn’t necessary out of the room and allowed us to work it through with the DP and actors. It made the world of difference and although we lost half a day, the footage we ended up with far surpassed what we would have had if we’d continued.

TrunkSpace: If someone came to you tomorrow and said, “Chris, here’s a blank check. Go out and develop whatever project you want for yourself.” What would you greenlight and why?
Mul: I love that question. There’s actually a project Michael and I have been talking about for years. As he’s been writing his novel about the history of mankind, the notion of an epic tale in a similar vein to “Prometheus” came about. We’ve benched it for now, but without a doubt, that is the passion project that we are always working to. As time has gone by, we get more excited about it, but realize that the scale of that will definitely require a great deal of finance and creative progression. I look forward to sharing that with everyone one day.