With “Wu Assassins” set to premiere August 8 on Netflix, series star Celia Au is prepared for the world to see her in a completely different light, though what the show’s possible success would mean for the future is not something any performer can ever truly prepare for.

“I mean beyond the work itself, I have no idea,” she says when asked about the impact of “Wu Assassins” in an exclusive interview with TrunkSpace. “I know that I’ll always be Celia Au and maybe I can pay off my mortgage earlier than expected. (Laughter)”

We recently sat down with Au to discuss unwrapping the excitement surrounding the series, having two shows on the air at the same time, and why she has Photoshopped herself into some of her favorite films.

TrunkSpace: From an outside perspective, “Wu Assassins” doesn’t only look like a ride as a viewer, but to be involved in a series like this – with such big set pieces and complicated choreography – it must have been a ride to be a part of as well. As you gear up to its premiere and the idea of people sinking their teeth into the first season as a whole, what kind of emotions are you juggling with?
Au: Wow! That’s a good question! I am still trying to figure out what my emotions are right now. I am definitely excited! Every time when I receive an email notification about the show, I am like a kid on Christmas morning. I am so proud of what we accomplished together as the Wu fam and I just can’t wait for you guys to check it out.

TrunkSpace: From what we’ve seen, this feels like the kind of show that could become a big hit for a platform like Netflix. That being said, is it important for you to try and not assign expectations to projects that you work on knowing that so much is out of your control? Does that help to not be let down when a project doesn’t find an audience?
Au: I definitely hope that people are going to enjoy and have fun watching it. I know for sure we had a lot of fun shooting the show. I do believe in sending good positive energy into the universe and not worry too much about things that are out of my control.

TrunkSpace: With Netflix rolling out all of the episodes at once on August 8, do you feel like you’ll have a pretty good idea right away if “Wu Assassins” will have an impact on your life beyond the work itself? If it’s a smash hit like “Stranger Things,” it could 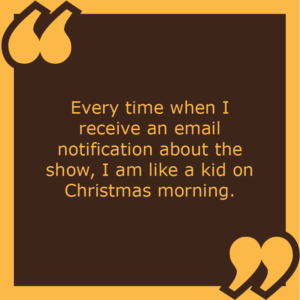 literally change things overnight.
Au: Oh my! It would be amazing if our show is a smash hit like “Stranger Things!” I mean beyond the work itself, I have no idea. I know that I’ll always be Celia Au and maybe I can pay off my mortgage earlier than expected. (Laughter)

TrunkSpace: Huge show. Huge platform in Netflix. Does it feel like, regardless of it becomes a smash hit with audiences, that “Wu Assassins” will be a career game changer for you that could open up other doors within the industry?
Au: Being on “Wu Assassins” has already been a game changer for me because I’ve met some awesome people just working on this show. I definitely hope that the show will open doors not just for me and our cast but for Asian Americans in the industry.

TrunkSpace: For the viewer, the end product is always the most memorable because that is what we see, but for those involved in the project we imagine it goes much deeper than that. What is something about your work on Season 1 of “Wu Assassins” that you’ll carry with you through the rest of your life and career?
Au: For sure the friends I’ve made on the show. I know that we are going to be friends for life. Career wise, my character Ying Ying is something completely different than any characters I’ve played before so the world can see a new side of Celia and what I can do.

TrunkSpace: Not only do you have “Wu Assassins” premiering on August 8, but you also have Season 2 of “Lodge 49” debuting on August 12. In this industry, does it feel like “when it rains it pours” in terms of the work not only coming in, but also with it finding its way into the world at the same time?
Au: Yes! I totally agree with that. It’s funny because I shot Season 2 of “Lodge 49” months after we wrapped “Wu Assassins” and now they are coming out four days apart. I feel like this happens a lot to people in our industry. We can be unemployed for a long time and suddenly when you book one job, there will be another job that wants you and they almost always have an overlapping schedule.

TrunkSpace: You grew up hanging out in your parent’s video store. As you look back at where you’ve come from to where you are now, would that little girl be surprised by the path you’re on or was this always in the back of her mind? What would excite young Celia most about where you are now?
Au: This was most definitely not on young Celia’s mind. I remember watching movies and being like, “Oh! That’s cool but how do these people make a living by playing pretend?” I think what will excite young Celia the most about present-day Celia is that she gets to see Asians on screen as heroes and kicking butt! When I was a kid, we used to be obsessed with the Power Rangers because that’s the only show where we could see Asian American superheroes.

TrunkSpace: You have a background in graphic design. If you could Photoshop yourself into any movie poster past or present – and in doing so be magically a part of that film as a performer – what would you choose and why?
Au: Of course, I did! I mean it is so much fun and I do the same to my friends’ faces as well. I’ve Photoshopped my face onto Hiro from “Big Hero 6,” Satsuki from “My Neighbor Totoro” and most recently, Peni Parker from “Spider-Man: Into the Spider-Verse!” I’ve turned them all into either birthday invites or holiday cards.

TrunkSpace: Time machine question. If you could jump ahead 10 years and get a glimpse of what your career looks like a decade from now, would you take that journey? If not, why?
Au: Yes, I would 100 percent take that journey. YOLO!