Byron Mann is on one heck of a project run, but he’s the first to admit that it wasn’t planned. In fact, he couldn’t have planned it this way if he tried.

Not only can the Hong Kong native be seen starring in the new Netflix series “Altered Carbon,” but you’ll soon be able to catch him opposite Dwayne “The Rock” Johnson in the upcoming action film “Skyscraper.” Both projects’ trailers were part of the highly-anticipated Super Bowl roster of commercials, proving once again that you just can’t plan for this kind of thing.

We recently sat down with Mann to discuss the reason “Altered Carbon” feels more like a film than a television series, why it won’t be easy for other networks to duplicate, and the place he often finds himself engaged in character work.

TrunkSpace: “Altered Carbon” seems like such an ambitious show, especially by television/streaming standards. Just the visuals… the sets… they’ve really built an atmosphere and then dropped the characters in to inhabit it.
Mann: I didn’t realize how ambitious they were until I started training for the show, both individually and they had me work with a trainer every morning. It was pretty hard, rigorous training. Then, in the afternoon, we would train for the fight sequence in the pilot episode. We did that for like two months. Training for one fight sequence for two months – it’s pretty steep, yeah.

TrunkSpace: That’s amazing. It definitely had the feel of watching a feature film.
Mann: There’s no question that they were making a feature film. The director, Miguel Sapochnik, who won an Emmy for “Game of Thrones” last year… there was no question that his ambition was to make it that. I mean, listen, the camera that they used was the ALEXA 65. That’s the same camera used for “The Revenant,” the movie with Leonardo DiCaprio. That camera is only used for widescreen display of the image, like in a movie theater. It’s never ever been used for a TV show. He chose to use this camera for this television show, this streaming show, I should call it. The ambition was clearly there from the get-go to make it feature film quality. When you see the first episode, you’ll see very clearly that it is a feature film presentation.

TrunkSpace: Maybe that’s why the sets and world stood out so much to us, because of the widescreen display.
Mann: Yeah. Of course, when we’re filming, you don’t really feel it. I can tell, not only from filming, but actually from the preparation, the training and rehearsals going into it, that obviously the sets were… they built a new world basically. They built a studio for the series. They converted a printing mill into a studio in Vancouver. It’s called the Skydance Studios, and Skydance owns it. I don’t know how to describe it. They weren’t making another “CSI.” They were making a groundbreaking show, from the ground up.

TrunkSpace: Which sort of calls out other networks. Executives at all of these other networks are going to be saying, “We need our own ‘Altered Carbon’.”
Mann: Oh man, that’s easier said than done. You can’t just duplicate that overnight. You can’t. It’s so hard making anything these days. It’s hard making a television show. It’s hard making a feature film. Not only do you have to make a show like that, then you have to make it a super duper outside-the-box, groundbreaking show. Forget about it. You can’t even plan it. A lot of things that came into being. There’s Laeta Kalogridis. She wrote “Terminator Genisys,” “Shutter Island.” She’s the leading science fiction writer in Hollywood. “Alita: Battle Angel,” the movie that is coming out from Robert Rodriguez… I mean, she’s it. She’s the Steven Spielberg of writers. Then Miguel Sapochnik, who was the executive producer and also directed the first big episode, which took 30 days to shoot. So you have a lot of these things coming together to make this kind of a show. 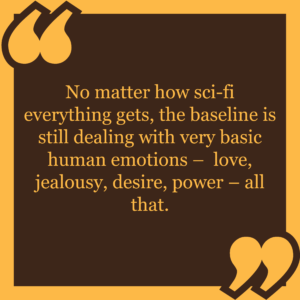 It’s like the Patriots – it’s a lot of things coming into one. Bill Belichick, Tom Brady, and Gronk. The reality is, in football terms, you can’t even duplicate that. Where are you going to get another dynasty? If one of them leaves? If Brady leaves?

I’m very honored, very humbled to happen to be a part of this. It’s awesome.

TrunkSpace: When you signed on, did you dive into the source material, Richard K. Morgan’s 2002 book, to see what came before?
Mann: No. When I first started, I talked to Laeta Kalogridis, the showrunner. She said, “Don’t read the book.” So I didn’t. I just read the script, and I had many, many hours of sitting down with her alone, and just asking her questions like, “What’s going on? What happened?” It’s a new world with new terminology, a new technique of how things work. It’s like “Blade Runner.” It’s a brand new world. Believe it or not, I think 50 years from now, I think our lives will be very close to what we see in “Altered Carbon.” It’s predicated on this premise, that everyone has a “stack,” like a gift in their vertebrae. All humans have this gift. Even if your outer body dies, you can go resave yourself again. As I understand, they’re heavily invested in this technology right now, as we speak.

TrunkSpace: So when you’re playing in the sandbox of a whole new world with new terminology and techniques on how things work, does it allow you to take a different approach to performance than you would with something set in modern day New York, for example?
Mann: Not really. As an actor, when you’re doing a scene, you just want to find out the questions. “Who are you? What do you want? What’s happening in the scene?” It’s still human emotions. No matter how sci-fi everything gets, the baseline is still dealing with very basic human emotions – love, jealousy, desire, power – all that.

TrunkSpace: Between “Altered Carbon” and the projects you have due up, you’re getting to work in a lot of different genres. As an actor, is it a treat to get to play in so many different types of projects?
Mann: Yeah, I guess it’s fun. It doesn’t really faze me too much. After playing so many different characters, I think it’s all… the stuff I said earlier, it applies to every single project. Basically, you find out who you are, what you’re doing here, and what are you trying to do? That hasn’t changed from the ’70s and the ’60s, when you had movies like “The Graduate,” or “Serpico,” or “The French Connection.” And now with “Altered Carbon,” it’s still the same thing. Especially for an actor, it’s just you playing in an emotion.

TrunkSpace: Is that the personal draw for you as an actor, the discovery of finding out who a character is?
Mann: Yeah. Sometimes you find it on the tape, when you’re filming. That’s gold, if you actually discover that.

TrunkSpace: Are you someone who looks at someone sitting in a coffee shop or in line at the grocery store and breaks down who they are? Do you have those storyteller moments where you’re trying to discover “characters” even in real life?
Mann: Well, it can hit you anytime – character thoughts can hit you anytime. Once you’re thinking about it, it’s in your subconscious. For me, I’ll tell you when it hits me, it hits me when I’m taking a shower. Sometimes I’m in the shower a long time, and you think about these things.

TrunkSpace: We can totally see that. No distractions. No cell phones. Just you and your thoughts.
Mann: Yeah, and the water is warm, hopefully. When you’re under warm water, your body relaxes. When you’re relaxed, a lot of good things happen to you. I’ve thought about that. I said, “Why do I have these great thoughts when I think in the shower?” It’s usually because your body is really relaxed.

TrunkSpace: You had two trailers for projects you’re in run during the Super Bowl. One was for “Altered Carbon,” and the other was for “Skyscraper,” starring Dwayne Johnson. Not too shabby for the most watched television event of the year!
Mann: Yeah, no kidding. Like I said, you can’t plan for this stuff. You just can’t. You just have to go along life’s journey, do the best you can, and then life will kind of find your way towards these things.

Mann can also be seen returning to SyFy’s “The Expanse” later this year and the upcoming Blumhouse thriller “Only You.”