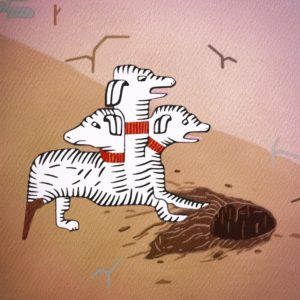 While the majority of their upcoming album “Scholars” was finished about a year ago, the songs that make up the record tell a story that they are eager to share, though they admit the individual interpretations are in the ears of the beholder. And therein lies the beauty of music. Like all art, what we see, hear and feel from any piece is our own unique experience. How we absorb songs and carry those interpretations with us throughout our lives is a sonic “Choose Your Own Adventure.” We’ll go left, you go right, but in the end, an album like “Scholars” can move us all in different ways.

We recently sat down with Arone Dyer and Aron Sanchez to discuss first impressions, how they’re constantly pulling each other in different creative directions, and why professional and personal goals don’t always see eye to eye in music.

TrunkSpace: “Scholars” drops on January 18. What emotions do you juggle with as you
prepare to release new material into the world?
Sanchez: I can feel a bit nervous about it but at the same time the album is work that we mostly completed a year ago and we’ve been performing these songs for awhile now – they’ve had a life of their own. They represent an emotional story that we are familiar with now. What will be different is that more people will hear this music within the confines of their own earbuds, in a critical setting or what have you, hopefully our audience will own this music and interpret it in ways that suits them. It’s exciting to see what happens next. It’s also exciting to just get it out into the world finally, and move forward with whatever new music is ahead of us.

TrunkSpace: As we understand it, the vast majority of the music that you two create as Buke & Gase comes out of the two of you sitting down in one room and clanging your minds together. Do you believe in creative kinship at first sight, and if so, did you experience that with each other when you first met?
Dyer: I think we had a particularly intense first meeting, confusing creative kinship with intimate kinship. We generally don’t talk about this (out of embarrassment or fear of judgment?), but I’ve been seeing the importance of discussing the subject more recently. I can only speak from my perspective, but I find artists tend to be quick to fall in love. Not that we feel more than a non-artist, but we pay closer attention to our feelings, giving them more weight and autonomy over our lives. So oftentimes artists who might be better off as 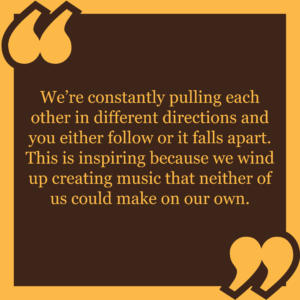 working partners end up coupling together, and in a fit of fiery passion, completely destroy their true calling of creative companionship. What many people consider to be celebrity drama might merely be an artists’ misinterpretation of attraction. We fell into what we thought was love, while continuing to make music together, and through time the intimate relationship died for both of us. In truth, for the past seven years or so, the creation of music has become the only thing that brings us together.

TrunkSpace: Is there something artistically inspiring about working together as a duo that you have been unable to achieve in a solo capacity? How does being in that room with your creative counterpart make you a stronger songwriter?
Sanchez: It’s a completely different experience working together versus creating music in a solo setting. When we improvise together it’s like a roller coaster ride – when it’s going well, we hop on the train and go. Sometimes it’s familiar territory and sometimes we end up places we’ve never been. The process of creating music we use requires us to rely on each other in ways that relinquishes our ego or specific sonic desires to a degree. We’re constantly pulling each other in different directions and you either follow or it falls apart. This is inspiring because we wind up creating music that neither of us could make on our own.

TrunkSpace: When choosing the tracks that would make up the album, you had over 60 songs to choose from. Was the process of whittling it down a difficult one, and how did you approach deciding what would ultimately become a part of “Scholars” and what would be best left for future releases?
Dyer: Many of the pieces were easy to set aside as lyrics were less concise or the energy wasn’t overwhelming. But of the songs that were complete and energetically enticing, it became a coin toss. Some we wanted to have on the album but there just wasn’t enough time for them. Hence B, C, D and Z sides.

TrunkSpace: What are you most proud of with the album?
Sanchez: I think we were able to get over our creative slump. We actually completed another record in 2014 but were unhappy with it and decided to not release it at the last minute. What followed was a long period of reinvention and trying to figure out what we had done wrong and not repeat it. It took a lot of trial and error of process, but ultimately we figured out the problem. Creatively we were getting in our own way, too critical and having too much control of the finished product and we had to find ways to get ourselves out of the room and let the music take control. I think we succeeded with “Scholars.”

TrunkSpace: Aron, you invent instruments, and in the process, create sounds that ears have never heard before. How much of that musical maiden voyage is part of Buke & Gase in terms of its sonic identity? Could you envision a day where there’s a Buke & Gase album that did not utilize your instrumental inventions?
Sanchez: Well, for some of this album we relied a lot less on the Buke and the Gase already – we tried some other processes to create and perform, using software and midi controllers. We’re doing this because we didn’t want to be tied down to the sonic limitations of our previous work. All of the instrumental creations for this project were solutions to a problem: how do we create interesting music that we can perform live and just be a duo? At first we tried expanding the sonic capabilities of electric stringed instruments and minimal percussion that we could perform simultaneously. That has now expanded to using computers and electronics to help us do more with what we have. This expansion has also mirrored our interests in other forms of music.

TrunkSpace: Does that make touring difficult? Does it take experimentation to carry over every sound that you’ve created in the studio and transfer it to the stage?
Sanchez: I’m always thinking about how our gear setup can be compact and easily tourable – our equipment has always been an integral and influential part of our music creation. The gear and music creation are always in conversation to some extent and are requiring different things of each other, thus we have to experiment and there’s lots of trial and error to get things right. Using more electronics and software has helped that a lot, and we now have a lot of sonic control over our live performances.

TrunkSpace: Can you envision a day when music is not a part of your life?
Dyer: I have pictured it, but I want to do everything in my power to avoid that possibility. I don’t feel either of us are limited to this particular project, which makes room for future musical opportunities. The question of having music in my life versus not is so much more existential than you might have wanted to hear: it’s the main reason I haven’t started a family. It’s hard to imagine having children AND being a musician (with limited means, I mean, for crying out loud, I have soooooo many side jobs to maintain MY life month-to-month, how could I conscientiously do that with another human to care for?! And then go on tour??!). The only models I have of that are already successful female artists and… men (who generally don’t have to have a child on their tit/hip for the formative years). Having a child would mean musical suicide, for all I know. So I guess when I’ve pictured my life without music, it’s because a fresh, new human needs my attention and love. What would you say to this?

TrunkSpace: Where are you hardest on yourself as artists?
Dyer: Internally. Personally. In the worst ways.
Sanchez: I can be too much of a perfectionist sometimes.

TrunkSpace: We’re jumping headfirst into 2019. Any New Year’s resolutions that you’re hoping to hold onto as you travel through the months ahead?
Dyer: My 2019 mantra is: FUTURE POSITIVE
Sanchez: Stay Real. Everything is OK.

“Scholars” is available January 18 from Brassland.