Bruno Verdoni has been working as a professional actor for nearly three decades, first falling in love with the craft after watching westerns and mob movies with his father. Throughout the course of his career he has appeared in a number of iconic television series, including “The X Files,” “Millennium,” and “Covert Affairs.” Starting on Christmas Day Verdoni can be seen in the highly-anticipated film “Molly’s Game,” starring Jessica Chastain, Idris Elba, and Kevin Costner.

We recently sat down with Verdoni to discuss improvising for Aaron Sorkin, why he manages expectations, and what it was like working on his first project, “Eddie and the Cruisers II.”

TrunkSpace: “Molly’s Game” opens on Christmas Day. That’s not a bad present to wake up to.
Verdoni: Exactly. I don’t know if I’ll be able to be there on the 25th, but the thing is, it’s either going to be that or Florida for me this year, so I’m not complaining.

TrunkSpace: How did the experience of shooting “Molly’s Game” compare to your experience on previous projects?
Verdoni: Everybody was just very focused. It was really just all about the script and the acting, which is where I feel comfortable because it’s an actor’s environment. You have someone like Aaron Sorkin whose supervising everything so you know you’re in good hands. It was work, but in a good way – not just, “Oh my God, I’m going to work.”

TrunkSpace: When you’re working on a film based on living characters and events, does the production itself take on a more serious tone? Does the fact that you’re portraying actual people sort of force you to focus in a different way?
Verdoni: It would be more of a question to ask Jessica (Chastain). My character and other characters, they’re real people, but the focus is really not on those people as much as Jessica. I’m assuming that she probably had a bunch of meetings with Molly Bloom to talk that over but I just felt like it was more like an actor’s environment on set – people just doing the best job they can to basically honor the script.

TrunkSpace: Aaron Sorkin is someone well-known for writing rich, complex dialogue. Was that reflected in your scenes for “Molly’s 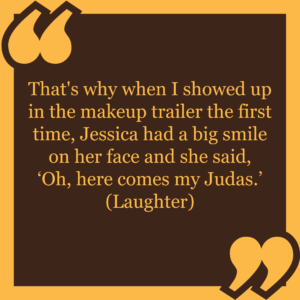 Game?”
Verdoni: No, not quite for my scenes because my scenes, funny enough, have way less dialogue than other scenes. At some point Aaron came up to me and he said, “Okay, we’re gonna improv the next one.” And in my mind I went, “What?” (Laughter) I was like, “From what I read, that’s not like you.” I wasn’t given a script because it’s very secretive, so he said, “I’ll set you up,” but I didn’t think it was needed because I read the book. The book and the story ends about three or four years ago and the movie has pretty much been updated to show what happened to Molly between now and between the release of the book and the release of the movie. So I said, “I think I know where I’m going so I’ll just give you something and then we’ll take it from there.” And so I improvised a whole bunch of things with Jessica. At one point Aaron wanted that to be just like a long shot where you don’t really hear people talk and then after I was done with my scene he said, “Okay, we’re gonna come in way closer and we’re gonna mic you.” So I guess he liked what I did, which for me, was a nice compliment coming from someone like Aaron Sorkin.

TrunkSpace: For those who haven’t read the book and have yet to see the movie, can you tell us about your character and where he falls into things?
Verdoni: The character Molly Bloom was on the verge of being an athlete and then at some point that didn’t happen and her dreams got crushed. She ended up in Los Angeles hosting poker games and she basically ended up hosting those super high stake games with rich people, celebrities and all of that. Eventually she was basically doing that herself – running her own show – and so she’s carrying a lot of money. My character is the bodyguard/driver Pat, who basically does that so much for her we become friends. And then, there’s a little sleazy side to Pat. He wants in on some of the money or, not so much the money as much as the reputation. Basically, he wants his friends to sort of associate themselves with Molly Bloom and she allows it because we’re friends. And it doesn’t really go down well because these guys are not real poker players, they’re more like criminals. It’s also really good for a film to get an analysis and be up there with some of the other casino or gambling films that have come out of Hollywood. There’s something magical about casino atmospheres, whether fictional or non-fictional.

That’s why when I showed up in the makeup trailer the first time, Jessica had a big smile on her face and she said, “Oh, here comes my Judas.” (Laughter)

TrunkSpace: So given the size of the film and the buzz surrounding it, is it difficult to not view your involvement as a career game changer?
Verdoni: No, because… I’ve been in the industry for a while and there’s a lot of things that you would expect to happen and they don’t. And sometimes you don’t expect things to happen and they do. So at some point you don’t want to live with any expectations. I was really looking forward to working with an actor of this caliber and I realized that… I felt like it was just a natural environment for me. It just felt very comfortable.

My thing is, or most people’s thing is, you want to do the best work you can to give yourself some great visibility and so that you can access other scripts that are of quality. So for me it’s more that I pour my all into it, whether it’s one scene or 20 scenes. I’m going to speak like a hockey player for second… I’m gonna give it my 110 percent.

TrunkSpace: Does that mean that in an industry where so much is out of an actor’s control, it’s important for you to live in the moment and not focus on the future?
Verdoni: Exactly. You never know where things are going to go. You do this, you can enjoy yourself in the process, and then everything else will fall wherever it may.

TrunkSpace: We’re children of the 80s. We were raised by HBO. We got pretty excited when we saw that you were in “Eddie and the Cruisers II.” Was that your first gig?
Verdoni: (Laughter) Yeah, it was. You know, it was supposed to be a much bigger gig and at the last minute they gave my part to one of the Platinum Blonde musicians. I also play music, so for me to play in that, I actually play the piano for real. Not on the recording, but when I play the piano, I learn the part. That’s the kind of an actor I am – I want to get as close as possible to the real thing. But it was great and every time I run into Michael Paré, we always talk about that. I can’t say I’ve met him many times, maybe two or three times since, but I loved the music. I still listen to the music once in a while.

TrunkSpace: We’re out in New England where John Cafferty still plays regularly, performing the classic Cruisers songs.
Verdoni: Lucky you! It’s such great music. It’s so driven. As soon as it starts you want to get up and play music or clap your hands and sing. It’s really, really well-crafted music.