Portraying Sue Heck’s very best BFF Brad in the long-running family sitcom “The Middle” has been a dream come true for Brock Ciarlelli. Not only has it been a creatively-rich training ground for the young actor who grew into adulthood while working on the show, but it is literally a case of “The Middle” actually turning out to be the beginning. After nine seasons, the series will officially sign off in May, but Ciarlelli will have already turned the page on the next chapter of his career, one that promises to bring surprises around every corner.

Next up, Ciarlelli is set to star in the one man show “Fully Committed, which is scheduled to run April 13 – April 22 at the Two Roads Theater in Los Angeles. In the show he will portray 35 different characters, each with his or her own unique personality and delivery.

We recently sat down with Ciarlelli to discuss what “The Middle” has meant to him, the way the audience has embraced Brad’s self-confidence, and why the unpredictability of show business makes it a business worth showing up for.

TrunkSpace: With “The Middle” signing off in May, does it feel like a chapter of your life is coming to an end? Have you viewed your experience on the series as more than just a job?
Ciarlelli: It does feel like a chapter is coming to an end. I didn’t quite know how I would feel when the final day of filming arrived. But after I finished my last day, while it was sad, I felt content. I was just so grateful and elated to have worked on a show that I’m a genuine fan of. While “The Middle” is definitely a job (a job that I love by the way), the amount of feedback and response I’ve gotten from fans made me realize just how much it touched them. A character like Brad doesn’t come around that often – which is why I’m so thankful I get to play him. I think a lot of times we see gay teens struggle with their identity because they’re petrified of what the world will think of them. Right away in Season 1, Brad was written as a character who was so confident in himself at such a young age, and I think that really resonates with viewers. And so yes, “The Middle” is important to me because I pay my rent with my salary from the show, but I know it’s so much more than a job because of how Brad is presented to the world… and I love that I’m the one who gets to do that.

TrunkSpace: Has it been a bit of an industry boot camp as well, at least in your early years where you were still learning the ins and outs of how everything worked? It seems that in this business in particular there are many things you can only learn by doing.
Ciarlelli: No doubt it’s been a boot camp. And I’m still learning. There’s still so much of the industry that I am completely ignorant to. No amount of acting classes can prepare you for what will be thrown at you on set. And so the thing I learned right away was to show up to set fully memorized and prepared with strong comedic choices… and if the director redirects you, he/she redirects you. There’s nothing wrong with that. Starting out, I got really upset and self-conscious when a director would give me an adjustment. But what I had to learn quickly was that this whole industry is one big collaboration; you’ll never be doing anything completely on your own. And now that makes me really confident in my work because everyone is collectively working towards making the best final product possible.

TrunkSpace: What are some surprise perks that have come out of your time on the series that you could have never anticipated when you first stepped foot onto the set? 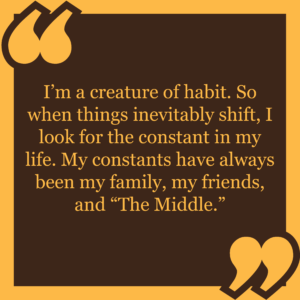 Ciarlelli: First, I never anticipated just how cushy network TV is. And while I still think some stuff is really too ‘boujie’ and unnecessary, as I started working more, I understood it. Take the idea of a trailer. Starting out, I thought having my own trailer gave me super-star status. However, I see the importance of a trailer now. An actor’s energy needs to be in front of the camera. And more times than not, as an actor you need a space where you can recoup and prepare to make sure you’re giving all the energy you have when you’re on set. If you’re doing your job right, it’s easy to get drained because you’re putting forth so much energy while you act – so the trailer, while it’s a nice perk, is an important necessity to ensure you’re giving the same amount of energy in the following scene.

TrunkSpace: You have spent over 50 episodes inhabiting Brad. What did you like most about him over the course of your time playing him, and are those things different from what first drew you to the character? Did you learn to love different aspects of who he was as time went on?
Ciarlelli: The thing I like most about Brad, and I think audiences would agree, is how good of a friend he is to Sue. He’s loyal. The thing that drew me to Brad originally was the phone call saying, “You booked the job!” (Laughter) But obviously, after 50+ episodes, the character really starts to take on layers. And that’s so much fun to play around with. I mentioned this earlier, but the thing that has always remained a constant with Brad is how confident he is in himself… and that’s something I always knew, even from when I auditioned for the part. But as time has gone on, I’ve started to appreciate it.

TrunkSpace: In many ways you grew up in front of the camera. Many of your costars were going through the same experiences. Did you find a kinship in that, navigating those big life changes while also being in the spotlight?
Ciarlelli: Growing up with “The Middle” gave me such a level of comfort. I went through some of life’s biggest changes while working on this show. I graduated high school, had my first love, had my first heartbreak, graduated college, did my own taxes for the first time (that was an experience, let me tell you), and so much more. And so many of those things are tremendously scary. But something that was so comforting was having “The Middle” through all those transformative moments. I’m a creature of habit. So when things inevitably shift, I look for the constant in my life. My constants have always been my family, my friends, and “The Middle.”

TrunkSpace: We read that you started acting in community theater when you were in the first grade. Did you know even then that this was your life’s path… that being an actor was your calling?
Ciarlelli: I would say yes. I knew I loved performing from an early age. When I first started doing theater I was too young to grasp that performing could be my job. In 3rd grade I was just kick-ball-changing during show choir performances in sequined vests and jazz shoes because it was a fun thing to do during the weekends. I didn’t really anticipate it as a career pursuit until I made the decision to leave community theater after 10 years to sign with reps in Los Angeles.

TrunkSpace: “The Middle” has shined a spotlight on your comedic talents for years, but was comedy something you were always comfortable with? Did the timing and delivery aspect come naturally to you?
Ciarlelli: I’ve always known comedy was a skill I’ve had. I love to laugh, and even more so, I love to make people laugh. That being said, I think the more I’ve worked and the more classes I’ve taken, the more refined my comedy has become. I’ve also started to grasp the different kinds of comedy. So while I think comedy comes naturally to me, it’s constantly something that needs to be worked on. It’s the only way I’m going to produce my best work.

TrunkSpace: Having spent so much time working on a comedic series, are you looking for material that is more dramatic moving forward, or is it less about the type of work and more about the quality?
Ciarlelli: Oh, the type of project doesn’t matter. Frankly, the work I’m looking for is anything where the casting director says, “You’re hired!” (Laughter) I will say, my strength lies in comedy. But my favorite types of projects, as an actor and viewer, are things that can both make me laugh and cry. That’s why I’m such a fan of “The Middle.” I love comedies that have a lot of heart. A perfect example of that is the movie “Love, Simon.” I just saw that this past weekend… twice.

TrunkSpace: You have a one man show, “Fully Committed” running in Los Angeles at the Two Roads Theater from April 13 – 22. How did that come about, and with only a few weeks before you take the stage, are you off book and ready to rock it? 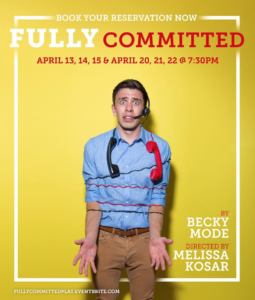 Ciarlelli: I saw Jesse Tyler Ferguson from “Modern Family” do “Fully Committed” on Broadway a few years ago and I was flabbergasted. He was incredible and the show is such a cool concept. And when we officially announced the final season of “The Middle,” I wanted something lined up, so I bought the rights. I’ve been working on it for months and I asked one of my favorite directors from “The Middle,” Melissa Kosar, to direct the show. She graciously said yes and has been doing a phenomenal job. Doing this scares the hell out of me – but that’s exactly why I should do it, right? I’ve been off book for a few months and have been spending time running it over and over, buying props, working out technical aspects with sound, and many other things that I never anticipated when I decided to do this… like buying insurance! Who knew that’s something the theater would require me to have?! I’m learning as I go.

TrunkSpace: You’re set to play 35 characters in “Fully Committed.” Who are some of the favorites you’ll be inhabiting and why are you looking forward to climbing into their particular skin?
Ciarlelli: Each of the 35 characters has a certain tick as well as a specific accent, pitch, or inflection to their voice. Like Gwyneth Paltrow’s assistant, Bryce, loves to exaggerate his “S’s” and is constantly texting. The chef is a former frat boy who’s always grabbing his crotch and barking out orders. And poor Judith Rush is a frail, 84-year-old woman who doesn’t understand the concept of a tasting menu and just wants the AARP discount. Bless her heart. I’m so excited for it. It’s been an amazing challenge as an actor. Because more than just learning 35 characters, I’m learning how to carry an entire show on my own. I’m the sole conductor for taking the audience through a gamut of emotions and making sure they’re entertained during every second of the show.

TrunkSpace: If someone came to you with a time machine and offered you a chance to have a glimpse at what your career will look like 10 years from now, would you take the futuristic peek?
Ciarlelli: My curiosity wants to say yes. However, I would pass on the futuristic peek. This industry is so unpredictable. That’s part of why I love it so much. Getting a hint for what’s to come would take away a major component of what makes show business… well, show business.

“The Middle” airs Wednesdays on ABC.