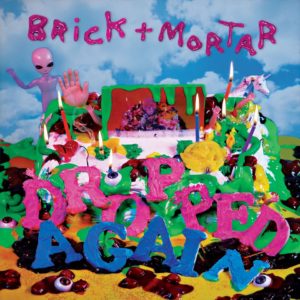 Rebelling against a difficult upbringing that included being raised by a conman father, Brandon Asraf poured himself into music, finding solace and purpose alongside of childhood friend John Tacon. As the duo Brick + Mortar, the pair writes moving messages in song form, highlighting relateable human subject matter like compassion and self motivation. Through career ups and downs, the New Jersey natives have stayed the course, focusing not on monetary motivation, but instead, building longterm interaction with fans.

We recently sat down with Asraf to discuss the illusion of money, healthy infighting, and the benefits of a career in music.

TrunkSpace: Adolescence can be fun, but mostly it’s confusing and weird and terrifying. You guys not only survived it together, but came out the other side making music. That seems like there would have to be some serious stars aligning for that to work out and for it to last this long, no?
Asraf: I guess it did. We’re also really comfortable arguing, so that’s probably why.

When I was little, we were rich until I was 10 and then my dad was a conman and a criminal, so he bounced. I saw that everybody around me wasn’t happy, but they were rich as fuck.

TrunkSpace: Those who put on a display of happiness the most are always the ones that are the least happy.
Asraf: When I saw John as a kid playing drums in the eighth grade at this talent show, I knew because he was so happy. I was like, “I want to learn how to do that because that’s something you can do forever.” Just the act of doing it feels good. Really, it started from this awesome, pure place of just wanting to play because I didn’t know what to do, what to focus on, and I just decided to do that because I knew he was so happy doing it.

Before we were even friends, I would just hang around him. One day, when we were walking home from school, actually after working out for football because we used to play together, he told me 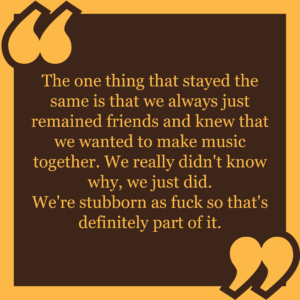 After that, we just played together all the time. He did bands when he was younger, like metal bands and stuff, but we always still played together. For years, we just did instrumental. The one thing that stayed the same is that we always just remained friends and knew that we wanted to make music together. We really didn’t know why, we just did. We’re stubborn as fuck so that’s definitely part of it.

TrunkSpace: You mentioned always being friends. Does it help being in the music industry with someone you’re friends with and grew up with, knowing that you always have each others’ back?
Asraf: Obviously we’re older so there’s so much life going on where you’re not hanging out every second. I think the ability to be really nasty to each other, if you’re arguing, but then realizing that it’s passion is…

We have our problems. We try to not be nasty as much as we can. I think a lot of bands never really argue their point. I think a lot of bands probably dance around, very nicely, what they don’t like about what they’re doing. Me and John, since we have been friends since we were 14, we just have it out. We’re gonna have an argument about something back and forth. It might be annoying to be around us, but at the same time, we’re not gonna both storm off and never resolve it, which is why it’s so annoying.

TrunkSpace: You don’t let it fester.
Asraf: Yeah. We basically just resolve it and then make a decision. I think it’s good having someone that you can really argue with, that’s not going to be overly sensitive, where you can argue and you’re not gonna quit. You’re obviously gonna get mad. You’re obviously gonna say fucked up shit or whatever, but you can’t argue like that with your manager really. You can’t argue like that with your booking agency. You can’t argue like that with anybody else in the industry because they’ll just be upset and throw their hands in the air. With a creative side, you can argue. You can really be honest and I think that’s the medicine that kept us together, is that we respect each other enough to be honest. Sometimes being honest isn’t a fun thing to do, but it also really cuts out a lot of the time of questioning what you’re doing.

TrunkSpace: You guys went through some business/music rights hurdles with the “Dropped Again” EP. Does that stress bring out the arguments more or do you guys turn that energy inwards and write more music?
Asraf: Well, I would say that all that business stuff made it more stressful as far as, “Okay, how are we gonna do this? How are we gonna do that? We have to get creative. We have to figure out where to get money for this, money for that.”

I feel like the most passionate arguments that me and John get in are really about creative shit or perception stuff with the band, what we want to represent and what we want things to be like. The money thing is always a human factor where you’re nervous about continuing to be able to pay for your lives and stuff like that. As far as how crazy the stress was, I would say that we’re lucky in the fact that we all kinda accepted a certain level of discomfort in our own lives. We were always very aware of the fact that you make nothing until you succeed, and then you could have a good life.

I try not to let money become the biggest deal, but it’s obviously hard because you need it for everything.

TrunkSpace: And you need money to make money. So much goes into a tour, finanically and logistically, to pull it off.
Asraf: Oh yeah, so many logistics. And also with our crew of people, everybody who we work with, we try to treat as fairly as possible. Everybody has lives. Everybody has needs too. We need everybody that we work with to be able to eat and do what they need to do. We’re not gonna be like. “Oh sorry, my life needs to be a little bit better so you just be happy you’re even doing this.” I mean, I know some bands kinda do that. We try not to do that. We also ask a lot of everyone who works with us, like our poor tour manager. Dan Feeny does so many more things than a tour manager has to do.

As far as the money thing, I think we’re lucky in the fact that we always had conversations before we got signed, everything about money not being important and about having our eye on the real prize, which is, “Can we really succeed?” Money was always a by product of success, hopefully. We didn’t really want to ever get a bunch of money without having respect or some kind of real passionate interaction with people.

TrunkSpace: Without that passionate interaction, bands become flashes in the pop culture pan, so it’s the right focus.
Asraf: Yeah. And you know, you want to feel like you did something positive for the world in some sense, even if it’s just for your own perception.

TrunkSpace: With everything that happened with the last EP, did it make you guys want to move away creatively from that particular collection of music and that period of your lives?
Asraf: We were definitely ready to move on because we were already recording the album for a while. We record always and it’s like an ever-changing kind of thing. We really do a lot of alteration that’s very drastic to songs. There was a feeling of wanting to move on to the next thing. The re-release has two new songs on it, but all the other songs we had done so long ago, but legally we were fucked so we got them back and it took so long that there is definitely a sense of wanting to move on. But also it was a good opportunity to get our face back out there and tour off something and also promote it to Europe because we didn’t really do that because we couldn’t before.

TrunkSpace: Outside of the music aspect of what you guys do… the recording, the writing, the touring… what’s your favorite part of the career musician lifestyle? What is it that pulls you in?
Asraf: I would say just the kind of honesty in doing it. You play a show and it either sucks or it doesn’t suck, you know what I mean? You kinda feel that and that’s a very honest interaction to have. Also, realizing that one person can influence other people in a positive way, like when kids pour their hearts out to you or tell you how you’ve helped them. That’s pretty much the most moving, huge thing that sticks with you.

And being able to wake up whenever you want is nice.