Portraying Kimberly Guilfoyle in the recently-released film Bombshell came with its share of professional pressures, but for actress Bree Condon, taking on such a controversial public persona in these politically divided times was not one of them.

“It’s true, Kimberly and I have very different political and personal views, but that’s the challenge of playing any character,” she said in an exclusive interview with TrunkSpace. “It’s almost like you’re that person’s lawyer and you have to defend them – you have to justify their actions and way of thinking for yourself.”

We recently sat down with Condon to discuss stepping into Kimberly’s spotlight, accepting the complexities of the human condition, and why she still follows the advice of an old classroom poster.

TrunkSpace: Bombshell is such a big project and is stacked with talent both in front of the camera and behind it. When a project like this comes along, does it have the feeling of a “once in a lifetime” opportunity and how do you personally manage expectations going into a project of this magnitude?
Condon: It definitely has that ‘pinch me’ feeling all the way through! I always try with every project to really enjoy every step along the way and to be in that moment as much as possible. Especially with this project, I loved each stage in the process of building this character – the research, costume fittings, the hair and makeup tests, and then of course getting to collaborate with so many greats in front and behind the camera!

TrunkSpace: In the film you’re playing someone who is not only a real person, but someone who is still very much in the public spotlight today. Does that come with an entirely different set of pressures, both external and those that you place on yourself?
Condon: Yes, it does add pressure, especially because this was a first for me playing a real person. I approached it like I do any other character, and dove into the research. The benefit of playing a real person who is so heavily in the spotlight is that there was a lot of information to dive into. Kimberly has also written a book, which I read multiple times and held as my ‘bible’. It was extremely helpful to have that, which is so rare!

TrunkSpace: We live in very politically-divided times. Did you worry how this project and your performance in it would be perceived by the general public on both sides of the aisle and how that could trickle over into your personal life, particularly as it relates to the internet/social media? 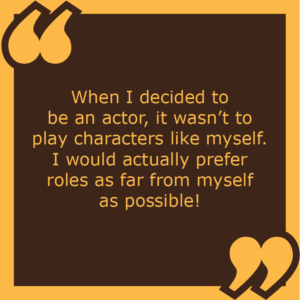 Condon: It’s true, Kimberly and I have very different political and personal views, but that’s the challenge of playing any character. It’s almost like you’re that person’s lawyer and you have to defend them – you have to justify their actions and way of thinking for yourself. When I decided to be an actor, it wasn’t to play characters like myself. I would actually prefer roles as far from myself as possible! I take it as a welcomed opportunity to step into someone else’s shoes.

TrunkSpace: As we discussed, you’re working with amazing talent on screen and behind the camera. What do you try to absorb from those around you on a job like this and then apply it to your career moving forward?
Condon: There was so much talent to absorb and to learn from! One overall quality that I took away from the project was specificity. The attention to detail that every single person, in front the camera and behind, had on this film was amazing to see and learn from.

TrunkSpace: For fans, the final product of a film or series is always the most memorable part, but for those involved in a project, we’d imagine it goes much deeper than that. For you, what is something about your time working on Bombshell that you’ll carry with you through the course of your life/career?
Condon: Working with Charlize Theron on this project was the highlight and something that I will always carry with me. The first day I was on set I saw her acting all day and the moment she was done, she went back to the trailer, took off all her incredible hair and makeup, and came right back to set and stepped into her role as producer. It was incredible to see that firsthand – she wore so many shoes and did it all so gracefully.

TrunkSpace: You’re portraying Kimberly Guilfoyle in Bombshell. If in the future someone was playing you on film, what would you hope they would take into account as they gave their perspective on your journey?
Condon: I would hope they would realize that nothing is ever as it seems. In our current society, we are inundated with so many visuals that rarely show the truth. As humans, we are extremely complex and I hope they would try to lift up the hood and see what’s really in there.

TrunkSpace: Where are you hardest on yourself as artist and how do you overcome those self-critical insecurities?
Condon: I’d say self-doubt and not trusting my instincts enough. In a lot of areas in my life, not just acting… but maybe that’s because I’m a typical Pisces!

TrunkSpace: If you sat down with your 10-year-old self and gave her a glimpse of her future, would she be surprised by where her journey has taken her thus far?
Condon: I’m sure she would be surprised! It’s crazy the different paths we take in life and how everything can fall into place. But in some ways my life is still very similar to that little girl – I’m very close to my family and I still have the same friends I grew up with since grade school, which I count myself very lucky and fortunate to have that stability and love throughout the years.

TrunkSpace: What has been the highlight of your career as a whole thus far?
Condon: Bombshell has been a huge highlight for me. Getting to be part of telling a story that is so timely and that will really make a difference moving forward in regard to sexual harassment is so rewarding. It’s why I wanted to become an actor – to tell stories that make a difference.

TrunkSpace: Time machine question. If you could jump ahead 10 years and get a glimpse of what your career looks like a decade from now, would you take that journey? If not, why?
Condon: As tempting as it sounds… I really wouldn’t! As cheesy as it sounds, it’s a journey not a race… I think that was a poster hanging in my 6th grade classroom! But it has stuck with me. It all makes you stronger and you just have to ride the wave, and that’s what I intend to do!