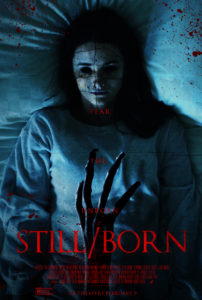 This time out we’re chatting with Brandon Christensen, co-writer and director of “Still/Born,” about his first feature directing experience, sharing the movie with an audience days after it was complete, and why his wife’s fears make for great plot points.

TrunkSpace: With “Still/Born” hitting the masses today, this must have been a very exciting week for you?
Christensen: It’s cool. We debuted at Overlook (Film Festival) almost a year ago and when you go through that whole process of festivals and then it kind of peters out, it feels like it’s over. It’s kind of like a renewed finding of the film again, for me, as things ramp up again to release. It’s really exciting. It’s nerve-wracking, for sure, though.

TrunkSpace: From what we understand, you’ve directed a few shorts, but this was your first feature. What was that experience like for you, not only creatively, but just in terms of going into the process and learning things that perhaps you didn’t know prior to doing?
Christensen: Yeah, this was my first feature film. I’d produced another one the year before with Colin Minihan, who was my partner on this one. He co-wrote it with me and was one of the producers. It definitely wouldn’t have been possible without him, just because he’s got a bunch of experience and he kind of brought me into the fold and he gave me a bunch of opportunities with this film that I don’t think I would’ve otherwise had, raising funds and things like that.

As far as first-time films go, I think I was incredibly fortunate to have someone like him, and my other producers, working with me because, when you think about that first feature film, most of the time it’s going to be filling up credit cards or pulling every favor in the book. I was really lucky that I didn’t have to deal with really any of that. I had this team close with me that was able to pull together so many great things for me. It was different. I’ve been around people that have gone through it the other way and I would definitely prefer my way because it was a much more comfortable experience for me.

It’s tough, though. I’ve got two kids of my own and a wife and when you’re making a film, when you’re doing a month of pre-production, a month of shooting, and then you’re in post for six to eight months – it’s really challenging just on that because you do have to kind of step away a little bit. You can still be there at the end of the day but your mind is so consumed with this project, that it can be challenging. My wife is really strong and she was able to fill in a lot of the gaps that I wasn’t able to during, especially, the first two months.

TrunkSpace: And there’s always so much that you can’t plan for. Long days tend to become longer days. 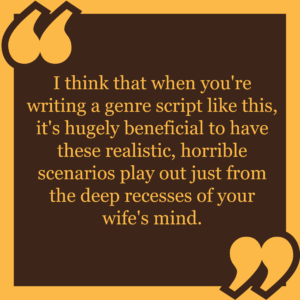 Christensen: Right, for sure. And we definitely had some strict rules in place. We didn’t want to do overtime. Budget-wise, we couldn’t. And one of the big things that was helpful on this was that we were shooting in one location for 15 of the 20 days, so with a lot of the set-ups and things, if we were like, “Oh, crap, we didn’t get this one scene,” we were gonna be there the next day, so we could pick it up. So, there wasn’t ever that scramble to finish at a location because we had to wrap out of it at a certain time. I think when Colin and I were writing the film, one of the concedes that we had was that we wanted to make it as achievable and as easy as possible to shoot, just because the budget was going to be low. We weren’t going to have a lot of extra time and stuff to play with.

TrunkSpace: Which always makes a lot of sense. We noticed that you also had a hand in the visual effects. Was that part of that same plan, not only minimizing where you could, but utilizing… in this case your individual skill sets?
Christensen: Yeah, definitely. I’ve kind of been learning VFX over the last 10 or so years and I’ve finally gotten to a place where I feel comfortable handling most situations. With this film, there’s so many instances where it does become a matter of, “I’ll fix it in post,” just because, otherwise you’re going to spend an hour trying to figure out a way to do it practically and it’s just not going to make sense for your schedule. So there would be a lot of moments where I was like, “Okay, yeah. Don’t worry about it. I’ll fix it in post. We can’t get that light. Move that light out of the frame. I’ll paint it out later.” It becomes part of the process, and it’s just become part of my process when I work where I’m able to at least see a frame on a screen and I can say, “Okay, I’m not going to worry about that right now because I know I can fix that.” And when you’re on hour 15 of a shot where you’re doing just one little thing, you totally regret it, but ultimately you’re saving yourself a lot of money.

TrunkSpace: Was getting the opportunity to direct “Still/Born” fulfilling a life-long dream?
Christensen: Yeah, definitely. When I was a kid, I was making dumb movies with my siblings. And growing up, I went to film school. I was kind of trying to do it that way. When Colin had read the script that he wanted do, it was a great opportunity for me to jump into a feature film and work with someone that’s done it before. I definitely have always wanted to do a feature. Before I did “Still/Born,” I was kind of leaning more towards television, like being one of those series directors who works on something like “Breaking Bad” or “Lost” or something like that, and just being with those longer stories. But during “Still/Born,” it definitely gave me a hunger to do more feature films because it’s a totally different art, just trying to encapsulate this entire story in a 90 minute period, which seems like a long time but it’s not. You get a hunger for it, so you want to do it again and fix a lot of the mistakes that you did the first time.

TrunkSpace: Film is a very communal experience, but especially horror. Did you sit in on any screenings and watch to see if the jump scares and uncomfortable beats you laced in there worked with audiences?
Christensen: Yeah, I had a chance to go to a few of the festivals. The first one though, Overlook, that was the first time I had ever done a festival before. We had just finished the film the week before we got the call that we got accepted. We were in Montreal doing the sound mix. It was a few weeks from that moment, so we had to finish the sound mix and I had to go do color in LA, and then ship off the DCP to Overlook. So we shipped it off, I think, five days before we screened. I didn’t really have a chance to watch it with a bunch of people. Going into that room was scarier for me than it was going to be for the audience, just because I’m watching for the technical imperfections and stuff. And when it started, the dialogue seemed a little low, so I marched to the back and I’m like, “Can you turn it up a little bit?” (Laughter) And they did. And again, I’m just like looking around, and I’m just like, “Can they hear this? Does this sound wrong?” And so I’d run to the back and say, “Turn it up a little bit more.” And once there’s that first jump scare with the monitor, once that hits, there were just shrieks in the audience and that made me a lot more comfortable because I realized, “Okay, everyone’s in this.”

It was a horror crowd because it’s a festival. They’re there to be entertained. Horror fans, I think, are the most gracious of fans out there. They’re so diverse, but at the same time they have a love for horror, that I don’t think fans of other genres really have, where they’re a little more picky or they have a little more of a critical eye. It was such a great experience, just to sort of feel the room move.

There’s nothing like watching it with a crowd because when those moments do work, it’s pretty amazing and it’s the reason why you get into this.

TrunkSpace: So as you look toward the future, do you see yourself staying within genre filmmaking or are you hoping to branch out and do other types of projects as well?
Christensen: I would love to get into something else eventually, but right now I’ve got a couple of scripts that we’re working on that are still horror. My wife and I are writing something right now, that we’re trying to get ready. It’s kind of an interesting experience to work with her because we’ve had kids together, we’ve been married almost 10 years now – there’s kind of a second hand language that we’re able to communicate with when we’re writing that it’s hard to duplicate. But what’s best, is that she’s just terrified of everything. so it’s great to be able to pick her brain. It’s like, “Okay, here’s the scenario. What’s the worst thing that could happen?” And typically she’s able to give that worst case scenario. I think that when you’re writing a genre script like this, it’s hugely beneficial to have these realistic, horrible scenarios play out just from the deep recesses of your wife’s mind.

“Still/Born” arrives in theaters and On Demand today.