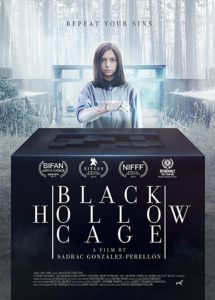 Reason We’re Watching It: Winter is coming to an end soon, but this movie could chill you to the bone in the dead of summer. González-Perellón has crafted a reality-bending horror flick that challenges your mind and its ability to ingest some very provocative and horrifying circumstances.

What It’s About: Alice (McDonell) is the 13-year-old daughter of Adam (Nicholson). They live in a stunningly modern house, so secluded that it is surrounded by a plush forest that happens to also contain a black cube that acts as a time machine of sorts. Alice is trying to become accustomed to using her new prosthetic arm and her dog has a voice emulator that allows her to speak, and the pup is not just screaming, “Squirrel!” (Shout out to the Pixar fans!) When a pair of strangers show up, things begin to unravel quickly and a terrible set of events play out, BUT, there is the opportunity to change things thanks to the cube in the forest… or maybe a chance to make those things even worse.

Whoah! Rewind That!: Without giving too much away, we’ll just say there is an edge-of-your-seat moment where you just want to yell out, “TURN AROUND!” We tend to do that when someone is in full-on stalk mode with a very shiny knife.

Watercooler-Worthy Tidbit: González-Perellón uses silence and an intentional lack of dialogue in areas of the film to evoke a sense of uneasiness and to create a more realistic feeling of suspense.