For many diehard “Supernatural” fans who have been watching throughout the course of these 13 seasons (and counting!), identifying actors who have appeared in multiple roles has become a bit of a side game. With such a vast universe to inhabit and more than 260 episodes already under their demon-hunting belts, it’s virtually impossible to have so many guest stars written into the series and not have them reappear a few years later. And when their as talented as Canadian-born Billy Wickman, it makes just as much creative sense as it does the logical variety.

We recently sat down with Wickman to discuss how he put physical separation between his two SPN characters, the handsomeness of the Winchester boys, and getting to play a Hallmark Channel villain.

TrunkSpace: You’ve played two characters within the “Supernatural” universe, which as we understand it, is not uncommon with that particular show. That being said, is that a common occurrence with other shows or does the tenure of “Supernatural” just make it impossible not to have that option available to the casting directors?
Wickman: That’s exactly right, when a show has been around as long as “Supernatural,” they have to start dipping back into the same talent pool. Most shows won’t see you twice, or even once, if you’ve appeared in the same “universe” on another show.

TrunkSpace: What is that experience like? When you’re playing two characters within the same universe, and knowing how passionate that fandom is, do you purposely try to separate yourself from what you’ve done previously, both physically and through performance?
Wickman: Absolutely. For my second time around we darkened my hair and beard and I played Elvis as an experienced extrovert, as opposed to “Brian”, the fresh-faced fearful youngster.

TrunkSpace: For us, your more memorable turn was as Elvis Katz in the season 12 episode, “Celebrating the Life of Asa Fox.” The episode itself had a classic horror vibe, but more importantly, the character was very memorable. What did you look to bring to the role when you first read the sides?
Wickman: I wanted him to be warm and human, even during his friend’s memorial, to remind us why Hunters fight for our side. Demon hunting is serious, but you have to live to be human.

TrunkSpace: In that episode you played a Hunter, which in our book, really puts you in the meat of the lore because there’s so few Hunter’s within the 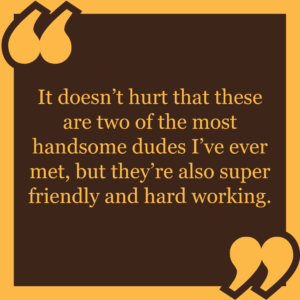 universe. Do you feel like that by playing Elvis you have left your fingerprint on the franchise in a way?
Wickman: Hunters are a pretty elite group and I am very proud to be in the company of such great characters and the amazing actors portraying them.

TrunkSpace: The “Supernatural” fandom, or the SPN Family as they have come to be called, is extremely passionate and fully invested in the world and characters who inhabit it. Over the course of 13 seasons, there’s a lot for them to love, but have you felt that fandom’s reach directly following your performances within the series? Is that fandom as welcoming to guest stars as it is their favorite series regulars and reoccurring characters?
Wickman: The SPN Family is incredible, and your reach is huge! I have received my largest Twitter bump yet from you all. The Fam loves Jared & Jensen so much that it’s probably easy to miss a guest, but I still feel a lot of appreciation for our work and I appreciate it right back!

TrunkSpace: As we previously touched on, the series is currently in its 13th season. In your opinion, what is it about the show that has driven so many people towards it for such a long period of time? Why has it been successful for so long while other shows can’t maintain that kind of longevity?
Wickman: It doesn’t hurt that these are two of the most handsome dudes I’ve ever met, but they’re also super friendly and hard working. I’ve known them each for a long time now, and they’ve always been fun, open to ideas, and constantly improving. Also, the show has such credibility that we can get a legendary director like John Badham to come in and lead us.

TrunkSpace: You have also guested or reoccurred on some other great shows with passionate fandoms, including “The X Files,” “Arrow, “Falling Skies,” and “Hell on Wheels.” When you’re joining a show that has been filming for such a long period of time, even as a guest star, is there a level of anxiousness coming into something that already has a particular tone and way of doing things on set? Does it feel a bit like you’re the new kid in a school where everyone already knows each other?
Wickman: (Laughter) That’s exactly what it feels like! It takes a minute to get that out of your head, but you have to remember that everyone there is on your side and wants you to succeed. It can really help if the director and lead actors express their trust in you early, but usually they’re busy doing their jobs too. The best you can do is stay confident in the talent that got you there, and you’ll be welcomed into the family quicker than you think.

TrunkSpace: You come from a big family with lots of siblings. Did that upbringing shape you into the actor that you’ve become? Did having a lot of siblings put you in a position to entertain and have an audience from a young age?
Wickman: Being the sixth of seven kids taught me to fight for, and earn an audience. You don’t get much stage time at a busy dinner table, so you need to be quick and interesting!

TrunkSpace: You were born and raised in Canada and work there extensively. From what you’ve seen, has the Canadian production industry continued to grow and expand since you started your career and has it presented more opportunities for actors to stay in Canada without having to consider moves to Los Angeles or New York?
Wickman: I have seen our industry fluctuate, but it is definitely on the incline now. Vancouver used to be a training ground for LA, but with the quantity and quality of productions here now, and the stunning natural beauty, many successful actors are choosing to stay here.

TrunkSpace: You’ll be appearing in the upcoming Hallmark Channel holiday movie “Finding Santa” premiering November 24. Can you tell us about your character and where he falls into things?
Wickman: I play Clint, he’s the closest thing to a villain you’ll find in a Hallmark Christmas movie. He is the epitome of entitlement, the mayor’s son, who still lives in her basement. Clint is given the part of Santa in the annual parade, much to the disappointment of the entire town. I had a great time on that set, with a lot of hilariously talented people. It was my second time working with director David Winning (first was “Van Helsing” episode “Big Mama” airing November 23). He is one of my all-time favorite people.

TrunkSpace: The Hallmark Channel holiday offerings are always extremely popular and come with a built-in audience. Why do you think they consistently do so well year in and year out?
Wickman: Hallmark fans know what to expect with those films. As in life; family, community, hope, and happiness are major themes visited in every project. Hallmark has a direct line to America’s heartstrings. (Ooh, that sounds good!)

Thanks for inviting me to chat, it was my pleasure, much love to the SPN Family!