For an actor, joining an existing series can be a daunting task, but any nerves Benjamin Charles Watson had upon signing up for Season 3 of “Designated Survivor” quickly vanished after the first day of filming. As confident digital officer Dontae Evans, the Jamaican-born actor’s emergence into the political thriller came at a time when the series was transitioning from ABC to its new home, Netflix. While many of the original cast members remain (Kiefer Sutherland, for example, still plays President Thomas Kirkman), many new faces have been hired on at the fictional White House, making Watson’s arrival a welcome addition to the ever-growing on-set family.

“I was basically joining a family that had already established its relationship for two years,” he said in an exclusive interview with TrunkSpace. “But I was accepted with open arms and quickly became one of the team.”

We recently sat down with Watson to discuss how the current political climate impacts the show, its newfound realism, and his “Snowpiercer” future.

TrunkSpace: You joined the latest season of “Designated Survivor” as digital officer Dontae Evans. Were there nerves joining the cast of an established series with the on-set tone already in place, even with the show making the leap to its new home Netflix?
Watson: I was absolutely scared to join a team that had already established itself with its audience. Being the new guy, I had to carefully study the first two seasons in order to match the tone. After the first day of filming, my nerves disappeared because I had the opportunity to work with actors I’ve always wanted to work with. I was basically joining a family that had already established its relationship for two years. But I was accepted with open arms and quickly became one of the team.

TrunkSpace: On the opposite side of that, is there also something exciting about joining a series that already has an established audience, knowing that there will be eyeballs waiting for it when the episodes eventually air?
Watson: It was very exciting joining a show that has such a fan base, but at the same time it made me nervous. This show is filled with characters that are dearly loved by its audiences and some characters didn’t return for Season 3. As a new member of the team, I had to make sure my character would be loved and accepted as a new member of the West Wing. And I think it was accomplished. Also, Dontae on the team will bring a fresh audience that has never experienced the show.

TrunkSpace: While you’re new to the series, tonally, has anything changed given that there are no longer the same restrictions with the 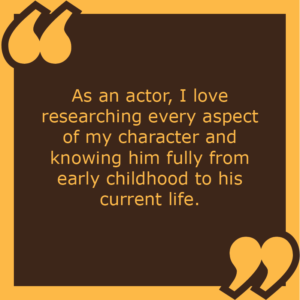 content given its new home? Is it grittier than what people will recall from its time on ABC?
Watson: I think after leaving ABC and finding its new home on Netflix, the show has gotten better. We’re able to push boundaries a bit further and also explore real topics that affect the American people. I find that the show is a lot more realistic and engaging. We parallel some real-world events and it keeps you on the edge of your seat.

TrunkSpace: There are some heavy hitters in the cast. As an actor, do you view an experience like this – and any experience really – just as much of a learning experience as you do a job? Can you take a role like Dontae Evans and apply the time on set to future roles/jobs?
Watson: This show was a huge learning experience as an actor. Getting the opportunity to watch Kiefer Sutherland work, was absolutely phenomenal. He’s such a master craftsman and sharing screen time with him on a one-on-one basis was exhilarating. I understand what it takes to be an actor at his caliber, and it was fascinating to watch him work. He was an incredible scene partner and absolutely a dream to work opposite.

Dontae is a lot stronger than I am in real life. He fully knows who he is as a person and is unapologetic about it. I’ve taken Dontae and applied him to my real-life, including auditions. He is strong, confident, fearless and wears his heart on his sleeve. He taught me a lot about life and how to become the person I truly desire to become.

TrunkSpace: We’re living in a very politically-focused time right now, particularly here in the United States. Does a show like “Designated Survivor” benefit creatively during a period of such uncertainty and unrest because so many people are attuned to what is going on around them? Does the attention on real-life politics spill over into the fictional world?
Watson: With the political uncertainty happening in the USA right now, I think it works amazingly for the show. This show gets the audience to look at the inside of The White House from a point of view they’ve never seen. This season, we’ve touched on so many real-world events that many individuals don’t necessarily know about stateside and abroad.

TrunkSpace: For the audience the final product is always the most memorable, but for those involved in a project we’d imagine that it goes much further than that. What is something from your time working on “Designated Survivor” that you’ll take with you through the rest of your life and career?
Watson: The thing I will take away from working on “Designated Survivor” is knowing that I’ve done the work and trusting that life I’ve prepared for my character will show up once the director calls “Action!” Also, just knowing and trusting myself and being confident in my abilities. I remember having a rough time on a scene and Julie White, who plays Lorraine Zimmer, saw how badly I was beating myself up and she told me that it’s okay and I know what I’m doing so just be easy on myself. After this pep talk, I attacked this scene in a completely different way and I’m happy I had her to calm me down.

TrunkSpace: When you receive a new script on a project that you’re working on – in this case “Designated Survivor” – what are you most excited to discover when reading about your character’s latest narrative progression? Is it his overall arc? Is it a great piece of dialogue? What are the most intriguing aspects for you personally about reading a new script for the first time?
Watson: Whenever we got a new script I’m so intrigued to discover more about Dontae’s arc throughout the episode and how it affects his overall objective goal. Dontae’s biggest reveal is that he’s HIV positive and I had no idea until I received and read the script! It blew my mind because I was so excited to research and explore the aspects of living with a disease that affect a lot of individuals, including African American men, and has been stigmatized for a long time. As an actor, I love researching every aspect of my character and knowing him fully from early childhood to his current life.

TrunkSpace: You’re also set to star in the small screen adaptation of “Snowpiercer” for TNT. This is a show that people are very excited about. For those fans of the film, what can they expect when they see the series air later this year, and how your character Brakeman Fuller falls into things?
Watson: I’ve been a huge fan of “Snowpiercer” for such a long time! The fans can expect something out of this world. You’re going to be drawn into a world that is chaotic and extreme, but full of heart and hope.

Brakeman Fuller is obedient, but he’s a bit weak and a follower. He’s primarily seen with John Osweiler (played by Sam Otto). The thing about Brakeman Fuller is that when the going gets tough, he’s not down to fight.

TrunkSpace: Time machine question. If you could jump ahead 10 years and get a glimpse of what your career looks like a decade from now, would you take that journey? If not, why?
Watson: Time machine! I’m not sure if I’d jump into the future 10 years. I’d be worried that by entering the future, I’d change the trajectory of my path by viewing it. What if by looking into the future, that the specific timeline would be changed? What if I saw myself and then I’d have to explain to myself who I was? Too many possibilities. But if I do go into the future and don’t like what I see, I would probably come back to the past and work diligently to change my future. SOOOOO, MAYBE I WOULD…

Season 3 of “Designated Survivor” is available now on Netflix.