Bandits on the Run

Self-described misfits, the members of Bandits on the Run – Regina Strayhorn, Adrian Blake Enscoe and Sydney Shepherd – have found creative kinship as a trio. From busking in the New York City subways to traveling the world, they’re now bringing their three-part harmonies to the digital space with their new EP, Bandits Live at the Power Station, available now.

“If you’re listening to the EP while waiting for the train, you may actually get a glimmer of what it’s like to encounter us alone one fall night on a deserted G train platform,” they said in an exclusive interview with TrunkSpace. “And that’s exactly what we want.”

We recently sat down with the band to discuss the energy of live invention, mutual understandings, and creating a shared moment with their listeners.

TrunkSpace: Your recent EP, Bandits Live at the Power Station, seems like the best possible way to enjoy the band, which is, in as live of a setting as possible. Does going into the studio require a different approach creatively to the music the group makes, because again, it seems like you’re all most at home on the stage?
Bandits: We are definitely most at home on the stage. The three of us are actors as well as musicians/writers, so performance comes naturally for us. When recording in studio as opposed to a live performance, it’s sort of like film acting vs. stage acting. Everything is under a microscope in the studio, every creak and breath is captured, which is delicious and exciting, but also challenges us to be more specific about what we are doing and the sounds we want to make. With something like the Power Station EP, we feel we found a bit of a middle ground. Because we are performing everything live, playing/singing together all at once, that energy of live creation is there, but captured in a very intentional way.

TrunkSpace: We read in a previous interview where you referred to yourselves as misfits by nature. Outside of finding a connection between yourselves as individuals, does music give you an outlet to channel that misfit energy through? 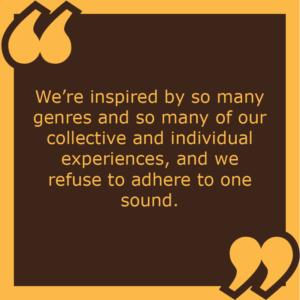 Bandits: Bandits is the primary outlet for our misfit-ness. We are so lucky to have found in each other a small family of creators who are hungry to make our true voices be heard. Everyone is used to being put in a box, but sometimes performers even moreso. There’s so much people assume about you based on the way you look or the energy they perceive from you, and we love inviting folks in for a closer look, encouraging them to dig deeper beneath the surface. We’re inspired by so many genres and so many of our collective and individual experiences, and we refuse to adhere to one sound. We have yet to find someone who can really nail us down into a genre, so we feel like we’re succeeding quite a bit in breaking down boundaries. We also understand each other’s voices to a point where we can really lift each other up and support each other, and celebrate our uniqueness not only as a band but as characters within the whole.

TrunkSpace: There are amazing three-part harmonies throughout your music that just seem to fit together in a way that transcends chance. Do you believe in creative love at first sight, and when you three first came together, was the creative connection – and the ability to blend them together seamlessly – apparent right away?
Bandits: In a word, yes. We do believe in creative love at first sight. Sydney and Regina began creating together many years before bandits – it started as a project where Regina would write a poem and Sydney would set it to music, and quickly escalated to both of them writing words and music seamlessly flowing one to the other. When Adrian and Sydney met years later – listen to “Love in the Underground” if you want the story of how – the energy was much the same, vibrant and symbiotic. When Regina moved to New York City and we tried our hand at singing all together, there was an undeniable and electric alchemy stronger than any of us had felt before. We were instantly a band. It was the weirdest thing. We’ve only grown stronger in our ability to collaborate and gel with each other. Even though our voices are so unique on their own, they somehow fit together in a way that defies logic. There are some recordings where we truly can’t tell each other’s voices apart, and we love it.

TrunkSpace: As a group, you seem to write from the perspective of outside storytellers… watchers of humanity. How have the journeys of others inspired you to turn their uniquely-taken paths into songs? Is it as simple as witnessing someone on the street and giving them a narrative?
Bandits: It’s so interesting that you say that, because many of our songs are actually deeply personal. Or if they’re told from an outside perspective, it’s usually an imaginary person we are infusing with our own stories and personalities. Sure, Regina’s never watched her cowboy lover ride off into the sunset like in “Cowboy on the Run,” Adrian’s never haunted the walls of a gal’s house like in “Funky Ghost,” and Sydney’s never turned her lover into a crow like in “Bonnie Jean,” but these stories are tales that are based, whether loosely or closely, on similar feelings and experiences, even if those experiences are daydreams.

TrunkSpace: What could someone learn about Bandits on the Run, both as artists and as individuals, in sitting down to listen to Bandits Live at the Power Station front to back?
Bandits: We’ve always been about synergy when we perform live, amongst ourselves and our audience, but also within whatever space we’re holding up. We actually began our journey busking on the NYC subways – always playing unplugged, and just soaking in the majestic acoustics of this space that most people think of as solely utilitarian. Our mission was to break up a mundane commute with a little spark of color and soul. When we snuck into the Power Station that night, we actually found ourselves in a familiar vibe to our late-night busking days… in this beautiful, cavernous acoustic environment with only ourselves and our instruments, there to make our own tiny mark on this space where the history is palpable. We played our hearts out to the room in what felt like an echo of our origins. If you’re listening to the EP while waiting for the train, you may actually get a glimmer of what it’s like to encounter us alone one fall night on a deserted G train platform. And that’s exactly what we want.

TrunkSpace: What are you most proud of with the EP?
Bandits: Honestly for us the best part of the whole thing is having a recording that sounds exactly like us playing live and unplugged. There’s always the temptation when you get in the studio to embellish, polish, and elaborate, but we’re really proud that at our core we’ve got a very full and detailed sound – which we can make completely organically and acoustically. This process taught us not to shy away from that. We were recording on some amazing analog equipment with a really incredible team (producer William Garrett and engineer Ian Kagey) which really set the scene for us to be at our most natural. It’s a 100 percent accurate recording of the moment, the room, and of the song in the room. Neil Young says that when he plays a song he is the song, and we want to use our songs to be present right next to you and share a moment with you, even through all the technology and 1s and 0s in between us. With this EP we found trust.

TrunkSpace: What do you get out of being in a band, particularly this trio, that you can’t achieve in a solo capacity? Creatively, what keeps you writing and performing as a unit?
Bandits: It’s very difficult to three-part-harmonize as one person. We jest we jest! But really. It’s hard. Truly, we’ve made our own rules for Bandits. There are some tunes that are so heavily written by one person that they could almost be solo numbers, and some written by all of us in the room building something brick by brick all at the same time. When you’re writing by yourself you don’t have that option, you’re all on your own.

Another wonderful thing about writing together: accidents. Sydney may hear a melody a certain way in her head, then while singing it Adrian may play a different chord on the guitar that she never thought of but somehow makes the song blossom, Regina may change a few words in lyric offhandedly that turns out to hold the key to a song’s true meaning, the list goes on. And of course it isn’t always magic, we’ll experiment and fight and change things and work on a line a million times, but that process is a trial by fire that often ends up in a song exceeding what we thought we were capable of.

TrunkSpace: Can you envision a day where music is not a part of your day to day life or will it always be present in what you do, even if the method changes?
Bandits: Music will always be with us. No matter what. We can’t fathom a day where we won’t play music together. It’s part of our identities and our love for each other and the way we interact with each other and with the greater world around us. We truly don’t think that will ever change. We’ll always be open to experimentation and growth of course, but so far we’ve always been on similar wavelengths, and we’re really digging this ride together.

TrunkSpace: What has been the highlight of your career thus far?
Bandits: Travel! Adventure! Serendipity! In the past few years, through equal parts gritty determination and dumb luck, we’ve been afforded the chance to travel beyond NYC, from the west coast to Western Europe. Every time we find ourselves in a new city, we’re given the chance to introduce ourselves with our music, playing in the street, at bars, in bookstores and coffee shops, outside of cathedrals, on boats, on beaches, on mountaintops and rooftops. We’ve encountered so many interesting people and experienced so many unique places, we could spend a whole night telling you only our favorite stories (and trust us, we will one day), but getting to explore the world this way is the real highlight of what we do.

TrunkSpace: Time machine question. If you could jump ahead 10 years and get a glimpse of what your career looks like a decade from now, would you take that journey? If not, why?
Bandits: Oh, no. The great unknown is far too exciting and inspiring. We trust that wherever we’ll be in 10 years, it’ll be full of beauty and madness and creation and adventure in even greater capacities than we could ever imagine. How we get there will be the fun part.

Bandits Live at the Power Station is available now.