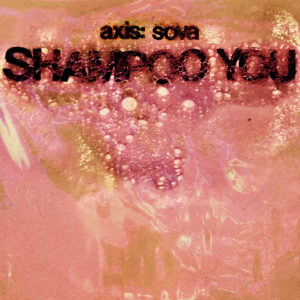 When Axis: Sova first began its journey, it consisted of only founding member Brett Sova. Since that time, both the sound and internal creative mechanics of the project have gone through a musical metamorphosis with the addition of Tim Kaiser (guitar) and Jeremy Freeze (bass). Their latest album “Shampoo You,” out November 16 on God? Records, is their most collaborative to date and it shows in the trio’s superb songwriting synergy.

We recently sat down with Sova to discuss the communal atmosphere that spawned the album, creating dense jams that everyone can enjoy, and why three heads are better than one.

TrunkSpace: “Shampoo You” is due to drop November 16 on God? Records. Do you experience the same level of excitement releasing an album at this stage in your careers as you did when you were just starting out with your music?
Sova: Hell yeah – this time in particular, even. “Shampoo You” is significantly advanced beyond anything we’ve done before, it’s very collaborative and it was a blast to make. If we weren’t excited to share it we’d have kept it in the basement.

TrunkSpace: Did you actively set out to make a different kind of record than your previous offerings, particularly “Motor Earth,” which was released in 2016? Creatively, what were your goals with “Shampoo You” and did you feel like you accomplished those things when you wrapped production?
Sova: We did. We wanted to make music that was sharper, sleeker and more immediate than ever before. We wanted to push tempos and push vocals, and push ourselves. “Shampoo You” is really communal, it’s very much a band record, and we each reached beyond ourselves to places we’d never been while writing and arranging it together. There was no winging it, or Frankensteining parts into songs in the studio, as was the case with “Motor Earth.” We didn’t let any song out of the rehearsal bunker until we felt confident it would be of the highest possible impact and we were ready to record it. We wanted to make a dense batch of jams that would be visceral enough for those that wanted to feel it deep yet playful enough for the surface dwellers who just want to party.

TrunkSpace: Focusing on the songwriting itself, is there an overall theme to this album, a particular headspace that is reflected in the tone and messaging of the songs themselves?
Sova: Collectively, the songs are a swirling amalgam of today’s shit, coming through in stories about identity, relationships, vices and consumerism, among other things. “Shampoo You” has a real up-front vibe, its songs are meant to be relatable on the surface as much as they are felt down in the depths. And part of the fun of making music is knowing that once it’s out of your hands and 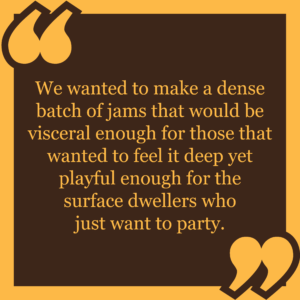 into someone else’s, the listener gets to come up with their own version of what a song might be about, or what it means to them. I don’t wanna spoil that for anybody.

TrunkSpace: What are you most proud of with the album?
Sova: One thing for sure is the collaborative execution. “Shampoo You” could not have been made without full-blown contributions from each of us: Tim (Kaiser), Jeremy (Freeze), and Cooper (Crain), who engineered, and me. I’m also pleased with the fact that we made perhaps the finest examples of prototypical Axis: Sova songs alongside songs that step far outside the realm of what we’ve done previously. We proudly expanded our sonic territory.

TrunkSpace: “Dodger” was the first single off of the album. How do you approach choosing that first track from a new record? Was “Dodger” the obvious choice or did you have other tracks in vying for the first slot?
Sova: We chose “Dodger” because it’s a good bridge vibe-wise from the previous album (wah-wah; a lot of guitar action), and because it demonstrates the attention to detail in songwriting and vocal harmonies we emphasize on “Shampoo You.” We wanted to show off a song that has a pre-chorus, in 3/4 time. All the songs on the record were viable candidates. They’re all good.

TrunkSpace: What do you get writing and performing within a band, and this band in particular, that you can’t access from a solo mindset? What are the benefits for you personally in having a group of people fighting the fight alongside of you?
Sova: If left to my own devices it’s easy for me to default to places where I’m comfortable and stay there. Working with Tim and Jeremy, who have strong ideas and opinions, and great melodic and harmonic intuition, enabled these songs to be better than they could’ve been coming from just one person. Three heads are better than one!

TrunkSpace: There are people who believe in love at first sight and true love. Is there such a thing as creatives at first sight? Can people connect over art in a way that has no real explanation and has Axis: Sova been that for you?
Sova: Absolutely.

TrunkSpace: We love great music, but we also love great lines – lyrical snippets that stick with you beyond the macro of a song or album. What is your favorite line from “Shampoo, You” and why?
Sova: I particularly like the line, “My head’s a tray for ashing, a pool of electric thrashing” from “Dodger,” because I felt wildly electric and kinda like a trash receptacle while I wrote it. Feelings aren’t always so easy to articulate.

TrunkSpace: The cover art for “Shampoo You” is mesmerizing. We find ourselves staring at it, but we’ll have to be honest, we’re not exactly sure what we’re looking at. What is it and where did the idea for the image come from?
Sova: We wanted the cover to be bold and vivid, like pop art, and also tactile. It’s very analog. If it’s mesmerizing and appealing to you, then we must’ve gotten something right.

TrunkSpace: Do you enjoy the other aspects of working in the music industry that stretch beyond the music itself… choosing album art, shooting videos, booking tours, etc.?
Sova: That stuff is fun, but I prefer working on the music and playing it, in terms of pure enjoyment.

TrunkSpace: Beyond the release, what’s next for the band and its members as we finish out 2018 and look forward to the new year?
Sova: More touring, probably a pallet-cleansing noise/jam tape or something… and keeping “Shampoo You” bubbling throughout 2019, too.

“Shampoo You” is available November 16 on God? Records.