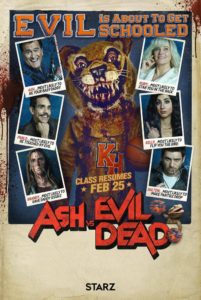 Where To Watch: Season 3 is currently airing on Starz. New episodes premiere every Sunday. Seasons 1 and 2 can also be streamed on Netflix.

Reason We’re Watching It: We are not only fans of the “Evil Dead” franchise as a whole, but we’re also fans of Bruce Campbell, Lucy Lawless, and now, Dana DeLorenzo and Ray Santiago. The cast of this show is reason enough to tune in, so it’s a boomstick bonus that every episode is packed with laugh-out-loud moments and gruesome gore that would make Greg Nicotero cringe. There is not a show out there right now that delivers on the consistent humor, action and horror in the way that this instant cable classic does.

What It’s About: The TV series jumps ahead 30 years from when we last saw Ash Williams (Campbell) in the film trilogy. Stuck living in the past, regaling his co-workers Pablo (Santiago) and Kelly (DeLorenzo) with tales of his Deadite-filled backstory, Ash’s serenity is soon dashed as evil once again rears its ugly head and forces him to oil up the ol’ chainsaw for some slashing and thrashing.

Whoah! Rewind that!: Much like how that chip jingle goes, Once you pop, you can’t stop; once you start watching “Ash vs Evil Dead,” you won’t be able to stop reliving the many horrific, eye-popping moments. To pick a memorable one in the first episode of Season 3, we had to go with Ash stomping harpsichord strings through a Deadite’s face, splitting it into several slices. This scene gave a whole new meaning to the phrase… slice of life.