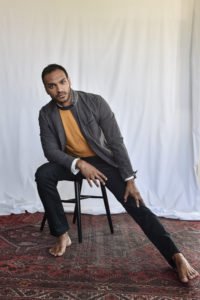 There’s magic to be found all over the tube these days. Words like whimsical, bewitching and spellbinding could easily be used to describe the rich storytelling available to binge-hungry viewers, but for fans of the SYFY series “The Magicians,” that magic is far more literal. (At least in an imaginary sense.)

Currently in its third season, the must watch show is a combination of great writing and a compelling ensemble group of actors. In fact, in a fictional series about magic, the real magic lies in the cast. Arjun Gupta, who portrays Penny, is a stealer of scenes, a Harry Houdini of performance. In watching his sleight of character, you see that his talents are no illusion. Much like TV as a whole, words like whimsical, bewitching and spellbinding could easily be used to describe what he brings to “The Magicians.”

We recently sat down with Gupta to discuss how the series has changed his life, why he’s feeling good about becoming an astrological adult, and the reason he never thinks about the end result of a performance.

TrunkSpace: You have a pinned tweet on your Twitter page that talks about how everybody should travel because it allows you to expand your horizons and to stretch and grow as a person. We’re curious, how has “The Magicians” expanded your horizons and allowed you to grow in ways that you didn’t think possible?
Gupta: Yeah, that’s actually a really a great question. First of all, there’s two ways – personally and artistically. As an artist and as an actor, I’ve been fortunate to work for the last, professionally, for the last 12 years. I was on a show before, but this was the first series where I was an integral part, where I was working every day. Just working every day has been a huge opportunity to grow. It used to be that I would learn something on set, and I would have to wait a month or two months until the next job and then put it into practice. Starting from the first season, I would learn something on a Tuesday; put it in on a Wednesday, the next day, and that has been a huge opportunity for growth and it has continued through the years.

My acting teacher, who I’m very comfortable with and I coach with often now, he often says, “This is your rep experience.” In theater, you would go into a repertory theater where you would be doing four different plays, and you would do it in a day. This was kind of that experience for me. And so, just the growth I’ve been able to go through as an actor from that standpoint, it’s such a big blessing. And on top of that, on our show, we get to stretch a lot. I mean, Penny is a very different character than who I am, and is different than characters I’ve gotten to play in the past. Our writers, God bless them, are a little bit crazy and take us to these crazy places that we as actors then want to make real and have to make real because that’s what makes our show good. So that’s another beautiful challenge that’s an opportunity to really grow.

Personally, I don’t know if it’s the show as much as it’s just life. I’m now 31. The last three years have been the last few years of my 20s and then into my 30s, starting that journey. TV is such a collaborative experience and I’ve learned so much on how to let go of my own ego; how to not let that get into practice and how to be even more of a team player. 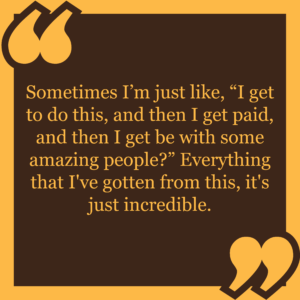 It’s just been an incredible opportunity and experience these last few years for growth.

TrunkSpace: You mentioned the life aspect, which is a big transition going from your 20s into your 30s. Sometimes you don’t even realize how big of a transition it is until you’re looking back on it years later.
Gupta: Yeah, I 100 percent agree with you. It’s interesting. I’ll be curious to be 40 and look back on it because it has been a whirlwind at times, for sure. I was really fortunate for the teachers that I’ve had around me that I continue to be in practice with. My support system and my family that help me… I’ve actually been talking about this in interviews that we’ve been doing. People who call the 20s the best times of their lives are either looking at it through rose-colored glasses or just have forgotten how stressful that time is.

TrunkSpace: It’s true. And you really don’t know who you are yet in your 20s.
Gupta: No, you really don’t. I’m not a strong practitioner of astrology, or, I’m not sure exactly how I feel about it… that’s a whole other conversation, but I did learn through a reading with someone that, astrologically speaking, you’re not an adult until you’re 30. And when that person said that to me I was like, “Yeah, that makes sense.” (Laughter) So I guess it’s feeling good to finally be close to, if not officially, an adult. (Laughter)

TrunkSpace: Artistically is it exciting to be a part of a show where literally anything can happen? You can show up to work one day and learn that you’re not just Penny, but literally a penny.
Gupta: Yeah, that is the huge blessing of being a part of this show. Look, we’re all so grateful to work, every actor… well, should be. Actually, I find that not everyone is, but I’m so grateful to have a job and work. So many of my friends, so many people that I know, don’t even have the opportunity to do what they love to do, let alone get paid to do what they love to do. It’s crazy. It’s just a crazy blessing. But on top of that, to then be on a show where we do what’s not a procedural where it’s formulaic or it’s the same thing day in and day out, we’re constantly surprised. It’s a dream. Sometimes I’m just like, “I get to do this, and then I get paid, and then I get be with some amazing people?” Everything that I’ve gotten from this, it’s just incredible.

It’s just really fun. It’s just fun. It’s hard to say that in any better term other than that it’s real fucking fun to come to work. (Laughter)

TrunkSpace: And the amazing part of that is, now that the show is in Season 3 and creatively hitting its stride, you no longer have a fan base. You have a fandom.
Gupta: Yeah, it’s interesting that we’re talking about 30, and also talking about this show, which I think has turned 30 in its third year, and what I mean by that is the writers… I noticed it from the first script that I read of Season 3. I was like, “Oh shit!” They just felt so much more comfortable. They know the voice. With the second season I felt like there was still a little bit of hesitation or a little bit of, like, “This is who we are, but can we do this?” And now it’s like, “This is who we are. Period!”

The amount of risks we’ve taken already in five episodes are risks that I would see a show take in two seasons. It’s really great to be a part of it.

Look, man, in the first season, I’ll be honest… it was my first series regular job because on “Nurse Jackie” it was just recurring. I was there all of the time, but I was just a kid. I was 22. I didn’t know what the fuck was going on to be completely honest with you. (Laughter) In that first season (of “The Magicians”) I was just like, “Oh my God! I want to do my job well and how do I do my job well?” It was just like a whole experience. But then in Season 2, and now in Season 3, it’s cool, I’m good, I know what it is and it’s just been an increased level of comfort and safety. I feel safe with myself, within the process, within my own process, within the amazing people that I can’t speak enough about that we get to work with in Vancouver. I feel freer to play. I can make more bold choices as an actor, and I’m supported. It’s just exciting.

TrunkSpace: One of the things we love so much about what you do with Penny is, you’re so expressive. Your face is doing so much in any given scene. Is that something you have tried to always bring to your work, or is it something you felt worked specifically with Penny?
Gupta: I appreciate that. That’s very kind of you to say. Look, I think performance is everything. It’s all of it; the way you deliver the line, how you look, how you… because you’re a human and you’re living in that moment and experiencing, it should be believable even without sound. The next time you’re watching something, close your eyes and just listen to the acting. Do you believe it? If you block your ears and watch the acting, do you believe it? It’s a fun exercise, for me at least.

Yeah, Penny is a different character for me. I don’t think about specifics – the results of what’s gonna show up. I surprise myself. That’s the goal. The goal is to surprise myself because I’m not thinking about the results of what this is gonna look like to the audience. I’m focusing on the process of what the character’s going through. What is this moment? What is this scene? And then in the process of being present with that, and listening and being dialed into the circumstances. What you’re referring to are byproducts of that process. So, for me, as soon as I get result oriented and start thinking about, for example, that… I’m just going to be very reductive… that I need to be upset in a scene. If I start focusing on it like, “Okay, by the middle of this scene I need to be upset,” for lack of more eloquent terms, I’m fucked.