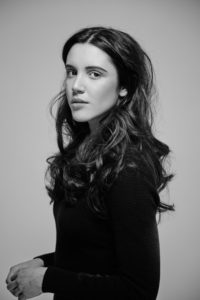 In a series filled with demons, murderous trees, and a hell-raising grimoire called the Necronomicon, it says something that the scariest storyline to come out of “Ash vs Evil Dead” may be that the man tasked with stopping all of the evil is actually a… gulp… father.

No one ever said that making the undead dead again would be easy, but for Ash Williams, chainsaw-wielding, boomstick-blasting anti-hero of “The Evil Dead” franchise, the most difficult thing he may have to face in Season 3 of the Starz gorefest is his own teenage daughter, played by the Australian-born Arielle Carver-O’Neill. Responsibility isn’t exactly Ash’s thing, unless there is a taproom called Responsibility in Jacksonville.

We recently sat down with Carver-O’Neill to discuss raising the bar higher than possessed cadaver colons, sprinkling “Ashisms” into her performance, and staring down the nozzles of eight blood canons.

TrunkSpace: You’re joining one of the wildest, no-holds-barred shows on television. How long did it take for you to say to yourself, “How the hell did I get here?” while on set? Were you thrust right into some crazy, Deadite-filled scene that felt just left of reality?
Carver-O’Neill: The first week of filming felt like shooting a drama. I was crying almost every day as Brandy loses her mother and her best friend all in one horrific and bloody evening so there were a lot of tears. When I finally saw the first episode I was surprised at how funny it was, I kind of forgot that it was a comedy.

But that really is what’s so special and unique about “Ash vs Evil Dead.” As Bruce put it to me one day on set, “It’s the place to come if you want to learn.” As an actor it’s so exciting and it keeps you on your toes. One day you’re shooting fight scenes and action sequences with stunt performers, the next you’re in a drama grieving the loss of the life you knew, another you’re in a comedy and witnessing Bruce Campbell deliver epic one-liners and trying really hard not to laugh.

TrunkSpace: Was the idea of working on a series with no storytelling filters an exciting one when you first signed on to inhabit Brandy? As you just mentioned, you’re getting to play with so many genres in a single show, which even in today’s vast television landscape seems like a rarity.
Carver-O’Neill: Definitely! It was fun to watch just how far they take things this season. I mean, last season Bruce was attacked by a cadaver’s possessed colon so of course you think, “Where on earth can they go from there!?” But they did, and they do! Our incredible team find such creative ways to up the stakes and the gross factor. Kelly has something on her leg for a little while and the prosthetics department did such an incredible job that looking at it made me feel nauseous. I can’t wait for people to see it. Poor Dana (DeLorenzo) had to walk around with that thing on though – she deserves an award. I couldn’t sit with her at lunch unless she covered it up. 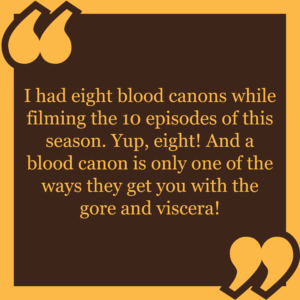 TrunkSpace: The core evil-fighting trio of Bruce, Dana and Ray Santiago have built up an amazing on-screen chemistry. Were you fighting any butterflies coming into the cast and feeling a bit like the new kid in class? How long did it take for you to feel a part of the “Ash vs Evil Dead” family?
Carver-O’Neill: I was definitely nervous going in, but I was also so excited to have a job and be working with such icons like Bruce Campbell and Lucy Lawless and learn as much as I could. The first piece of advice Bruce gave me when I met him was, “If you’re not having fun, you’re doing it wrong,” so I did my best to keep reminding myself of that. That being said, everyone was so welcoming, supportive and nice that I felt part of the family very quickly. They’re all such good people and great actors, I learnt so much from working with them… and we also had the world’s greatest crew.

TrunkSpace: From a performance standpoint, what was it about Brandy that you were most excited to dive into? As more of the season came into focus for you, did new aspects of her personality reveal themselves?
Carver-O’Neill: They did – we only get the scripts as we’re filming so her arc kind of revealed itself to me. It made the journey a little more real. She didn’t know where she’d end up and neither did I! Brandy goes on this incredible journey. Her entire reality is shattered and those closest to her are taken violently and traumatically and she’s left feeling very alone, confused and grieving. Not only for her mother and best friend but for the world she had created around her. She’s also the kind of person who needs to figure things out for herself, she doesn’t trust easily and so she doesn’t just believe what anyone says. She needs to find answers for herself. Through that she not only grows physically stronger throughout the season but she also gets mentally and emotionally stronger as well.

TrunkSpace: Brandy is Ash’s long-lost daughter. Those are some big genes to fill. Are there any aspects of how Bruce presents Ash that you get to mirror given the fact that you’re his onscreen offspring?
Carver-O’Neill: Bruce and I talked about putting in mannerisms (we called them Ashisms) and some moments where you see Brandy do something that Ash would do. We don’t know if they’ll make the cut, but we had a lot of fun finding them to show just how alike they are.

And even though Brandy didn’t grow up with Ash, they do have a lot in common. They share that Williams’ stubborn streak, the habit of acting first and thinking later (or never in Ash’s case), their trust issues and sense of humor. But at the same time I still wanted Brandy to be very much her own person – she’s more ambitious and quite a bit smarter than her father.

TrunkSpace: One of the things that seems like a rite of passage for all “Ash vs Evil Dead” regulars is a complete on-camera drenching in blood and/or demon-related fluids. How long did it take before you got covered in cinematic goo and what was that experience like?
Carver-O’Neill: I had eight blood canons while filming the 10 episodes of this season. Yup, eight! And a blood canon is only one of the ways they get you with the gore and viscera!

In case anyone doesn’t know… a blood canon is a way they can hit you with a hell of a lot of fake blood in a shorter amount of time. So there’s a keg of cold, sticky fake blood with a hose connecting to an air pressure tank thing with another hose being held by a very happy-looking special effects crew member who is pointing the end of that hose at you, and most likely at your face. There are also different nozzles on the end to change the look and shape of the blood as it hits you… I could write a book on this process just from one season! Anyway, it sounds like a chainsaw and it feels like a high pressure hose and there is no controlling your face or body when it hits you. Pretty much every time you have to pretend you don’t know it’s coming so the shock is real. It’s quite the adrenaline rush. I recommend it to everyone.

My first blood canon we had new directors to the series and it was also their first blood canon… they got a bit excited and just let it roll for about 30 seconds. That’s a steady stream of blood to my face for 30 seconds straight.

TrunkSpace: Those Deadites love to throw out one-liners while they’re raising demonic hell, but truth be told, that Deadite look – the milky white eyes, gnarly teeth and emaciated faces – is pretty terrifying. When you’re staring down a costar in Deadite makeup, is it easier to tap into the primal fight or flight response for the sake of the scene? Does it help you to express fear as Brandy?
Carver-O’Neill: It always does make it a little easier when it’s all there in front of you. The prosthetics and visual effects team on the show are such incredibly talented and skilled artists that it does take some getting used to when you’re standing behind a Deadite in the lunch line.

I had so much fun working with different methods on the show. Sometimes all the Deadites are right in front of you, grabbing at or chasing you and that’s always a little easier. But it was such a fun exercise when you get to use your imagination and there’s actually nothing there. Or you’re fighting an inanimate object, or yourself!

TrunkSpace: In a single sentence, how would you best describe your acting journey from where you began your career to where you are today on “Ash vs Evil Dead?”
Carver-O’Neill: Hard work pays off.

TrunkSpace: Within that journey, did you ever question if you were taking the right path? Was acting a choice or the ONLY choice for you?
Carver-O’Neill: I never really had that day or that moment where I was like, “That’s what I wanna do! I wanna be an actor!” I’ve just always known and always loved it. I can’t remember a time that was different. Though it’s definitely had it’s hard moments, there’s been a lot of struggle but I keep reminding myself in those times that persistence is key. I’m a hard worker and I love doing it and I plan on acting until I either can’t or I stop loving it.

TrunkSpace: If someone came to you with a time machine and offered you a chance to have a glimpse at what your career will look like 10 years from now, would you take the futuristic peek?
Carver-O’Neill: Nope. I would hate knowing. It would make me so neurotic! And those movies never turn out well… either it’s good news and they get complacent so the future changes and goes bad, or it’s bad news and they try desperately to change it, only to make it worse. I’m good letting my story unfold as I go.