Welcome to the fifth and final installment of our LYCAN WEEK ongoing feature!

Opening today in select theaters, “Lycan” tells the story of six college kids who revisit an old Georgia legend, the strange and puzzling story of Emily Burt, the Talbot County werewolf. Based upon true historical events, the film features Vanessa Angel (“Kingpin,” “Weird Science”) as a professor who inadvertently thrusts her students into the adventure of their young lives.

We recently sat down with Angel to discuss being on the forefront of the cable television revolution, breaking preconceived casting notions, and why she was so happy to step into the classroom for “Lycan.”

TrunkSpace: You starred in the series adaptation of “Weird Science,” which in a lot of ways was on the forefront of scripted television branching out beyond the major networks. Do you think of it as a pioneer series in that regard?
Angel: Yes, and actually, “Weird Science” was USA Network’s first scripted show. I think they did “Weird Science” and “Duckman” at the same time. So, yes, it was definitely a pioneer show and now there are so many scripted cable shows as well as on Amazon and Netflix. Everybody’s doing it, so yeah, that was sort of new back then.

TrunkSpace: But as you were working on it, was acting in cable viewed differently than it is now?
Angel: Yeah, people were a little bit skeptical. Agents and managers would prefer you to go into a regular network show, but it 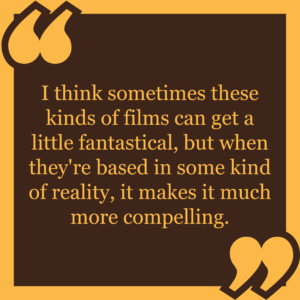 was just such a different show that I was willing to jump in and take a chance. And actually, because John Landis was the executive producer, it got picked up for 13 episodes right off the bat. So, it wasn’t like a pilot and then, “Let’s see what happens.” That was another incentive to do it. And I hadn’t really done that much comedy and I thought it would be a great opportunity to learn how to do that on the fly. It was a great experience and we ended up doing 88 episodes. It was really a good time in my life.

TrunkSpace: You mentioned not really doing comedy before “Weird Science,” but in a lot of ways you became synonymous with comedy after that.
Angel: I know! My very first film was “Spies Like Us,” even though I was sort of window dressing in that movie.

That’s the thing, you do one thing that you get known for and that opens a lot of similar doors. Not that I’m complaining because I got the chance to shoot “Kingpin” during a hiatus of “Weird Science” at that same time. It can be a little frustrating getting sort of put in a certain box at a certain point in your career, but I’ve actually, over the years, done a really diverse amount of work. A lot of people don’t know some of the stuff that I’ve done. Before I did “Weird Science” I was actually on a drama called “Reasonable Doubts” were I played a police officer with Mark Harmon and Marlee Matlin. People just don’t ever think that I would’ve played a cop on an American TV show.

TrunkSpace: Do you think it’s more difficult for a woman in Hollywood, particularly when you were starting out, to not be pigeonholed?
Angel: Yes, it’s really hard, especially because I had done “Baywatch” and I had done some things that really do sort of put you in that category. And plus I was a model, so I had that kind of “package” as well. Perception is so much in this business. They see your resume and that you’ve done a certain amount of certain things and they definitely think that you have limited range and then they’re not even willing to give you a chance to come in and show them otherwise. So it’s super frustrating and it’s still like that to a certain degree. There’s some roles that come up that I feel I’m right for and then you hear from your agent, “Oh, well they don’t think that you’re right or a good fit.” And I’m like, “No, but I’m where I am now in my life and I’m so different to the girl that was on ‘Weird Science’ and ‘Kingpin.’” And sometimes they just don’t see it.

The good thing nowadays is that you can self-tape, which means that if they’re not willing to see you for something, and you’re really passionate about it, you can put yourself on tape and send it to them in hopes that you might change their mind. It doesn’t often work, but there’s that opportunity.

TrunkSpace: There seems to be a whole new aspect to the casting process nowadays as well and that’s how many followers you have on social media. We’ve heard stories of people losing out on parts because someone else had a bigger following, which adds a new layer of frustration to the rejection process.
Angel: I know, right!? I’ve heard the same thing. I don’t even have an Instagram account. I’m really old-school. I’m not a young girl anymore. I think that’s more a priority for younger actors. But yes, there’s literally YouTube sensations and people with massive Instagram followings who get opportunities over really experienced, well-trained actors because, like you said, they have more followers, which is insane. I mean, I have a Facebook fan page, but that’s about it. And I can’t kind of wrap my head around that new way of thinking. But again, at my point in my career, in my life, it probably wouldn’t particularly effect me if I had a massive amount of followers. I’m not really sure. I think it’s more of the sort of 20-something crowd.

The business has definitely changed a lot since I started.

TrunkSpace: Some of those business changes are certainly good for creative people, notably that it’s more accessible for individuals to make content on their own now. Your film “Lycan” is a great example of that.
Angel: Yes, I think there are more avenues now. Dania and her husband, Bev, it’s amazing that they put this thing together. They literally did it on their own. I just play a cameo in it, but it was not an easy shoot for the rest of the cast because they were literally in the woods in Atlanta. It was sort of like gorilla film-making. Dania, she was literally booking everybody’s flights. She was starring in the movie, producing the movie… she was pretty much in every frame of the movie. She is a remarkable woman. I adore her. She’s like my soul sister.

TrunkSpace: How did “Lycan” first come into your life?
Angel: Well, I knew Dania. She’s a friend of mine, so she sent me the script and said, “How would you feel about playing the professor?” It’s the kind of role that I wouldn’t normally get to play because people don’t think of me as a professor. And I really like the script and I like the fact that my character sort of opens up the movie and gives the kids the assignment to rediscover a moment in history, which leads into this adventure.

TrunkSpace: The film is about a local Georgia legend, but every town seems to have its own folklore. Do you think that makes the film relateable to people across the board?
Angel: Yeah, I think so. For me, it definitely made it more interesting that it was based on a true story. I think sometimes these kinds of films can get a little fantastical, but when they’re based in some kind of reality, it makes it much more compelling.

TrunkSpace: You mentioned that people wouldn’t normally cast you as a professor, but if someone gave you a blank check to develop any kind of starring vehicle for yourself, what kind of role would it be?
Angel: Oh gosh, that’s such a good question! I would just like to play something that’s multi-layered, something like a lawyer or just somebody that’s got a lot of issues to deal with. I feel now, in my life at this point, I’m a mom and trying to navigate my career still. Just dealing with the issues that you sort of come to at mid-life, I think that it’s just very different than I thought it would be. I would just like to be able to sort of use some of the things I’m going through in my own life in a role.

I would also love to be back on a TV show. That would be incredible.