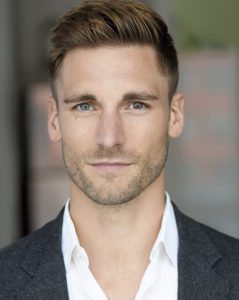 Premiering this Saturday at 9 pm ET/PT is the romantic comedy “Love Struck Café” starring Sarah Jane Morris and Andrew W. Walker. We recently sat down with Walker to discuss the importance of on-screen chemistry, how the fall season plays into the film’s storyline, and why watching Hallmark Channel reminds him of gathering around the television with his family when he was younger.

TrunkSpace: You’ve worked on a number of Hallmark Channel films over the years. How does “Love Struck Café” differ from the others you’ve starred in as far as performance and where you were able to go with your character?
Walker: Well, these things always rely on the chemistry between myself and the lead female. Sometimes these things take a little longer to develop over the course of the 15 days, because these are such quick shoots that you really need to kind of hit the ground running.

TrunkSpace: Hammering something like this out in 15 days is really impressive.
Walker: It’s crazy. Usually you get the job maybe a week before you go to shoot it, so you have about a week by yourself and then you meet your leading lady and then you have two days with that person before you actually start shooting, so it really is no time at all. I think something that really helped on “Love Struck Café” was, Sarah and I had been introduced through a friend. She was working on a show called “Brothers & Sisters” and a girlfriend of my wife and mine worked on that show as well. So we had met her a long time ago and she’s just a great person. We had a rapport.

By day three we really started to get in the groove, and then once that happens we’re able to play and have a lot more fun, and just 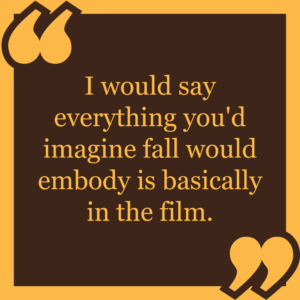 really challenge each other as well. I like it when I’m questioned on my decisions and where I’m bringing my character and where we came from and where we’re going. Sarah’s like, “Hey, let’s talk about where we came from today. Let’s go back in the script.” So we were working in the makeup trailer. We were working on our lunch breaks. Even when our day ended, we would meet up for maybe an hour-and-a-half or so and just talk through the next day and just make sense of what’s happening.

And with this, it’s a lot more playful, I think. It’s more broad of a range than the other Hallmark’s that I’ve done. I just had the ability to play around a lot more.

TrunkSpace: When you arrive on set and hit the ground running, is the script itself still being massaged throughout the production process?
Walker: Being massaged throughout the process, every day. The framework is there, but the meat of it all, we could change it up, almost as much as we’d like. Obviously that could be a slippery slope. You start changing things here and there in the plot, and then you get stuck in the editing room at the end. So we’ve got to keep it within the confines of everything, obviously. But yeah, we had the ability to change it up and add things that we felt necessary, where we felt necessary.

TrunkSpace: Hallmark Channel is one of the few networks that is continuing to grow its viewer base and their original programming continues to grow in popularity. Why do you think that is?
Walker: I think it’s a real positive spin. We deal with so many issues nowadays, between religion, politics, and environment, I think that it’s a great way for people to escape. And it’s a classic story. Hallmark has their formula. They are telling classic, Humphrey Bogart-like stories – different versions of classics that we all have grown up to love.

I remember sitting down every Sunday back in the day with my parents to watch the Disney movies that would be airing on Sunday night. We’d go to church in the morning, we’d go for lunch with the whole family, and then I would go play soccer or football or whatever, and then at night we’d all sit down with our TV dinners and sit there and watch these Disney movies. That’s what the allure is, just bringing people back to what we had back in the day, and I think that’s super important. I think that it’s nice to see that families want to sit down and watch these movies together, because they’re also movies that the whole family can watch together.

TrunkSpace: Hallmark Channel is also really great about connecting audiences to the feel and emotions of the seasons that they’re in through the seasonal content that they produce. “Love Struck Café” is part of the Fall Harvest programming event. How does that play into the story?
Walker: I would say everything you’d imagine fall would embody is basically in the film. We go to a pumpkin patch. We go on a wagon ride through an apple orchard. We enter a pie baking contest. It’s actually not a pie, but it’s basically an apple baking contest where the town gets together and bakes the pie. So, leaves are falling on the ground. It’s cooler weather outside. It’s all of the above.

TrunkSpace: When you’re shooting these movies out of season, does it throw you out of whack personally? Are you thinking about celebrating Christmas in the summer?
Walker: I just came back from shooting one for Lifetime right now. I was in Winnipeg, and it was torture. (Laughter) We had these big winter jackets on and stuff.

Psychologically it doesn’t throw me necessarily, because I just jump into it. And the set decorators – they always do such a great job at really doing it up and making sure that everybody feels like the holiday that they’re going to portray. Maybe physically it throws me a little bit off whack because I’m wearing three layers and I’m sweating, supposedly in the winter. (Laughter) But no, you can get into it really easily. It’s just all imagination. It’s fun. I get imaginative.

TrunkSpace: Outside of acting, you’re also producing, recently having finished up a science fiction film called “Oxalis,” right?
Walker: Yeah, we actually just submitted to Sundance and we submitted it to Tribeca, so we’re just crossing our fingers and hopefully it gets picked up somewhere.

TrunkSpace: Was this your first time producing a feature?
Walker: Producing a feature, yes. I produced a documentary about seven years ago called “Stolen Seas” and it was based on pirates in Somalia, but this is my first feature that I’ve ever produced.

TrunkSpace: One of the things that people always seem to be drawn to, at least for those of a particular personality type, is the problem solving aspect of producing. Is that something that you found yourself being drawn to?
Walker: Yeah. I own a business with my wife in Los Angeles. We have a cold-pressed juice business and we’ve had it for about five years now, so I’ve always enjoyed bringing people together in collaboration. It was a struggle at first, getting the branding done, choosing the best payroll company, reaching out to businesses who would be willing to shift our produce, etc., but it was all worth it. With my business, I’ve definitely had to resolve many, many conflicts, but I do love that aspect of it. For example, most of our staff work from home. This can be difficult as sometimes there can be problems with morale and productivity. I use a WFH survey to help track things and stop it becoming a problem. I just like bringing people together. Like with movies, if you cast it right, you don’t have to do that much. You just have to sit back and let people do what they do.

See Walker do what he does this Saturday when “Love Struck Café” premieres on Hallmark Channel.