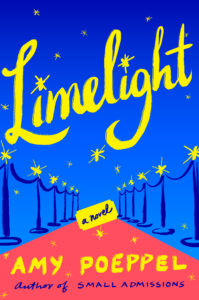 This time out we’re chatting with author Amy Poeppel about her new novel “Limelight,” how she tapped into her own NYC theatrical experience to tell the story, and why her ideal writing conditions involve a sleeping dog by her side.

TrunkSpace: Your new book “Limelight” was released yesterday. As you gear up to release new material to the world, what emotions do you juggle with? Is it difficult putting so much of yourself into something and then giving it to the world?
Poeppel: It is a thrill to have “Limelight” heading out in the world! This book is a combination of my three biggest passions: parenting, New York City, and Broadway theater. I wanted to write a story that captures the highs and lows of all three.

Publishing a novel is nerve-wracking to be sure. But as someone coming to this career later in life, I’m mostly feeling grateful.

TrunkSpace: You’ve worked as a stage actress. How much of your own experiences and behind-the-scenes insight went into not only crafting the world your characters inhabit, but their individual POVs as well?
Poeppel: My background as an actress definitely helped in crafting the scenes in “Limelight.” I wanted theater to be the backdrop, so I wrote a book in which a teen-idol named Carter, known for his partying and bad behavior, is cast in a new musical on Broadway, along with the distinguished Tony Award winner Kevin Kline. In order to write about what Carter experiences in rehearsals and on stage, I drew on my own involvement in ensemble productions.

The time I spent acting was formative in my understanding of character and motivation, but also of my love of theater more generally. I learned about cast dynamics, backstage etiquette, rehearsal stress, and onstage jitters. I often write in script format, as if I were writing a play. I love to hear the dialogue first and then later rewrite it as prose.

TrunkSpace: Which character in the book do you most identify with and why? 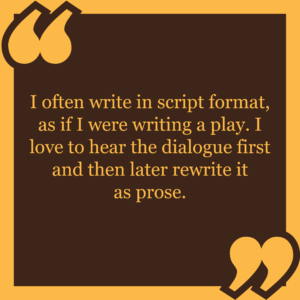 Poeppel: I identify with my protagonist Allison, who becomes the personal assistant to Carter, the bratty pop-star. Like Allison, I am a New York City transplant, and I went through the challenge of raising kids in this wonderful, crazy city. And also like Allison, I rarely cook in my tiny apartment kitchen, and I always remember to keep my sense of humor.

TrunkSpace: Humor is always an ingredient you use within your writing. Is it a balancing act finding the right amount of funny to sprinkle in? With something like “Limelight,” did you step back at any point and decide if you needed more or less throughout the course of the novel?
Poeppel: I definitely like to make readers laugh, just as I enjoy reading the work of comedic writers, like Barbara Pym, Nora Ephron, Tom Robbins, Maria Semple, Mindy Kaling, and Douglas Adams. Recognizing the absurdity in life, in our own behavior, and even in difficult situations, is how I get through the day! Having said that, I also want my books to have substance and feeling to go along with the humor.

TrunkSpace: As you look back at the work, what are you most proud of when it comes to “Limelight?”
Poeppel: I suppose I’m most proud of the connections I created between the characters. I tried very hard to capture the dynamics of the Brinkley family and to get their relationships as well developed as possible. I hoped to make the reader care about them individually but also as a family.

I also wanted the reader to root for my unlikable pop-star in spite of his terrible attitude and behavior! If they do, I will consider that an achievement.

TrunkSpace: When you sit down to write a new book, do you write with a particular audience in mind, and if so, does that serve as a creative compass or can it be a hindrance in the creative process?
Poeppel: In general, I would say I write for women of all ages and for a few good men. More specifically I write with my friends in mind, like my close friend Amy (who happens to have the best laugh in the world).

TrunkSpace: How long did it take for you to discover your voice as a writer?
Poeppel: Only 50 years! I’ve had many jobs in my life and dabbled in writing all along the way. But it wasn’t until I turned 50 and wrote “Small Admissions,” my first novel, that I started to find my voice.

TrunkSpace: Regarding the process, is writing a labor of love for you or does it feel more like labor? Do you enjoy the process?
Poeppel: I enjoy the entire process. I love the early moments of figuring out what a story is about. I appreciate the endless rewriting that makes bad writing better. I find writing fiction very difficult, but I feel extremely fortunate to have this job.

TrunkSpace: And what does that process look like? What are the ideal conditions for putting in a good day of writing?
Poeppel: I do not have a strict schedule for writing, although that is an aspiration! Rather, I find that some days I’ll sit for hours and hours to write and others, when life gets in the way, the manuscript remains untouched. I’m most productive when I’m at home with my phone off and my kids out. Ideally my dog is sleeping nearby. 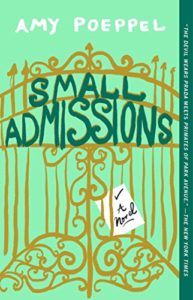 TrunkSpace: Do you self-edit as you write?
Poeppel: Yes, somewhat, and I’m getting better at it over time. However, that does not seem to reduce much of the editing needed after the book is “finished.” The editing process is so important. It can be frustrating at times to try over and over to get a certain arc in the story just right or to rework a character in a major way, but it’s very satisfying to get it right.

TrunkSpace: Where are you the hardest on yourself as a writer?
Poeppel: I would say it’s my lack of a schedule. I love the idea of waking up at six in the morning, exercising, having coffee, and then sitting down to an eight-hour day of writing. But I have a hard time making that happen. Instead on many days, I open my laptop as soon as I wake up, write for several hours before I even get dressed, and then realize too late that I never took the dog out.

TrunkSpace: What are you working on now and what will people be able to read next?
Poeppel: I’m working on a novel about a classical musician, her dilapidated weekend house outside of New York City, her sputtering career, and her grown and flown children who unexpectedly return to the nest. To save her beloved ensemble, she places all of her bets on hosting a spectacular musical event to honor her father, a brilliant conductor, socialite, and musical legend in his own right. Relationships within tight-knit groups, whether a family, a cast, or a musical quartet, are endlessly fascinating and amusing to me.