Amy Aquino has been lending her talents to memorable projects for decades, and in turn, leaving a lasting impression on our pop culture processors. From “Working Girl” in the ‘80s to “Picket Fences” in the ‘90s and “Curb Your Enthusiasm” in the new century, the New Jersey native continues to take on projects that not only entertain audiences but spark shifts in both the method and delivery of content within the industry itself.

For the last four years Aquino has portrayed Grace Billets on the series “Bosch,” which is set to kick off Season 4 April 13 on Amazon Prime. Based on the novels by Michael Connelly and starring Titus Welliver, the episodic crime drama was already greenlit for a fifth season before the fourth ever reached an audience, a rarity in the business of television.

We recently sat down with Aquino to discuss gorilla filmmaking for Larry David, dealing with the fictional bureaucracy of being a captain, and why she feels so lucky to be doing what she loves.

TrunkSpace: We were recently re-binging our way through “Curb Your Enthusiasm” for at least the third time. Is there something extra special about being involved in a series that people don’t only watch, but will watch again and again?
Aquino: That one was so much fun because it is actually improvised. What they do is – you’re probably aware of it – they write a prose description of what happens in the scene, but without any lines, and you don’t actually say any lines. They even do the camera blocking with you just kind of saying, “Well, alright, I’ll walk over to the table here and greet Larry, and then I will go and find my table over there and ask the waitress for something.” You never actually say lines until the camera’s rolling. They get absolutely everything fresh and it was so much fun to do.

TrunkSpace: Sounds a bit theatrical in a way.
Aquino: It’s a little like theater, it’s a little like improv. A lot much more fun than theater because you get to write your own lines. And it’s a little like the real life theater in a way because they shoot on location and they don’t have all the big fancy set-ups. It’s like, “Where should I change?” “Well, I think there’s a bathroom over there.” “Okay. I’ll go in the bathroom and I’ll change.”

TrunkSpace: Gorilla filmmaking. (Laughter)
Aquino: Yeah, with Larry David and HBO. So, the biggest budget of anybody, of any professional company on earth. (Laughter) But it was really fun.

TrunkSpace: “Bosch” returns on April 13. What has the experience been like for you getting to return to the character for four seasons now?
Aquino: It’s pretty lovely being able to kind of live with her and find out more about her over a long period of time. It really is. I haven’t had that experience. I’ve recurred on a lot of shows, and I was able to do it on some levels with “ER” over the course of 15 seasons, but not as intensely as this. It’s lovely to have regular work, God knows, as an actor… and as an actress of a certain age. That’s just great. And certainly, the relationships get enriched, and watching Maddie (Madison Lintz) grow up, literally, from a little girl to a young woman, has been extraordinary. I feel very grateful.

TrunkSpace: Where have you seen Grace grow the most from when you first discovered her to where she is now in Season 4? 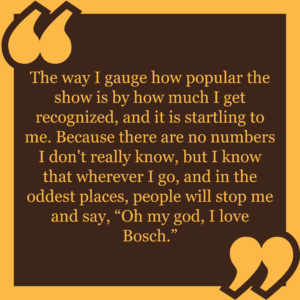 Aquino: Well, the big growth has been professionally, but in the sense of understanding where she’s headed and what she really likes to do, and what her limitations are. Obviously, the affair that she had was a terrifically bad idea, which she didn’t really understand at the time. But the fact that that prevents her from being a captain made her sit back and appreciate what it is she is doing, and that there’s value in what she does, and that she wouldn’t necessarily flourish, or want to be dealing with the bureaucracy of being a captain. There’s something very satisfying about being far more directly involved with the solving of crimes. So, she’s kind of coming to terms with that, although this season is interesting because she gets a real taste of what life might have been like.

TrunkSpace: That must help to keep things fresh for you as well because she’s physically being put in different circumstances, which would force anyone to change their p.o.v. over time?
Aquino: Oh, completely. Absolutely. And the other piece where she’s having to really kind of stretch and dig deep is having to do with her relationship with Bosch, because as he has been more and more internalizing his pain, and there has been more and more pain to internalize, she’s finding it more and more challenging to reach him. You know, I look back at some of the first season and second season, when we’d have a difference of opinion about how he should behave, we would have a flat out conversation about it, and now he’s, as you’ll see in this season, contending with solving his mother’s murder, and he’s contending with other major personal tragedy, and he hasn’t had a lot of therapy. Where he goes, and where he’s learnt to go, is to just shut down, and it’s made him much more of a challenge to deal with, and to balance the friendship and the professional relationship. That’s been kind of an interesting, and frustrating, ride to be on recently with him.

TrunkSpace: Season to season, “Bosch” episodes are rolled out all at once. Does that that change the experience for you?
Aquino: I guess so. It doesn’t make an enormous difference to me, except for, on some levels, to talk about it once it’s released. Once it’s released, we don’t have to worry about spoilers. You’re on your own. Although, I don’t know that everybody sits down and watches it right away, binges all the episodes, but I suspect that the vast majority do. It’s only 10 episodes and people, our fans, are so crazy about the show and they have been waiting for nine months or for a year, most of them, for it to happen, that I don’t think they’re gonna waste a whole lot of time. But, as I said, I don’t know that it changes my experience of it that much. I still wait for each script to see where it’s gonna go. I have a general sense of what her story’s gonna be, but even I can get surprised by some of the things that happen, just as you would with a show that goes for a longer period of time.

TrunkSpace: It must be nice to know you have a fifth season already greenlit before the fourth even comes out.
Aquino: How lucky am I? Yeah. And we’ve known, actually, for a while and we just couldn’t talk about it. Look, Amazon really respects Michael. They have a great relationship, and while they won’t talk about the show, or they don’t talk about numbers, we can certainly assume that based on that, that it’s tremendously popular and therefore it’s a valuable commodity to Amazon. And that’s nice to know.

TrunkSpace: Well, and that’s just it, it must be refreshing to not have it be about the numbers, but instead, about the quality of the show itself.
Aquino: Yeah. I mean, look, we all know that Amazon has got algorithms for everything. There’s no question that they have figured out that there’s tremendous value to their company to have this show up there for whatever reason. I mean, maybe people who watch “Bosch” buy a lot of stuff, so it’s just a completely different outlet on some levels and they keep it to themselves and that’s fine. But also, because of Michael and his worldwide popularity, I think it is tremendously valuable for them to be associated with him, and to have Amazon, as a media outlet, associated with him. That has to mean a lot. The way I gauge how popular the show is by how much I get recognized, and it is startling to me. Because there are no numbers I don’t really know, but I know that wherever I go, and in the oddest places, people will stop me and say, “Oh my god, I love ‘Bosch’.” “Oh my gosh, oh my God, that’s you! Wow, it’s Grace Billets. Wow, I love the show.” It’s extraordinary.

TrunkSpace: Most other streaming platforms seem to be in the content business, and by that we mean, they’re churning out new shows on a regular basis, but Amazon seems focused on the ones that are working for them.
Aquino: Yeah. They are going for quality and not quantity, that’s for sure. There’s no filler. They don’t need to be doing content because they have so many other avenues by which they make their money, so they only do content that they really believe in, and that’s kinda special. You don’t have 24 hours of the day to fill up.

TrunkSpace: Do you still enjoy the process of acting as much as you did the first time you stepped on a set? Is it still as exciting for you as it was then?
Aquino: I think I would be lying to say that it was. I still feel incredibly grateful to be able to do this thing, and I love being challenged, and I love trying the process of figuring out what is actually going on here, you know, looking at these words on a page and digging behind them because I’ve got a very analytical mind and that’s where I love to go. At this age, after 30 years in the business, it’s not gonna be the same. I remember when I shot “Working Girl,” and I couldn’t believe my good fortune. I don’t think it is that. That is precisely the same. Because, I guess knowing how the sausage is made too, and especially in film and television, it’s certainly different from theater. I probably still get the same thrills in theater, getting on the stage when I’m doing plays, which I continue to do, because that is just that immediate moment.

TrunkSpace: And it must change night to night depending on the audience as well?
Aquino: Absolutely, every night is completely different because you do have a relationship with the audience, and you have a relationship with the people on stage with you, but the audience is your costar in a big way and not everybody understands that, how wildly different your evening is depending upon who’s out there taking the ride with you. It’s more comfortable, certainly more contained, in a film and television set, but I still love it and wonder how fortunate am I to be able to do something that does challenge me like this, and to be compensated for it. I’ll never forget how lucky I am.