The new crime mockumentary “American Vandal” debuts tomorrow on Netflix, and if the early buzz surrounding the series is any indication, you’ll be discussing it in depth around the water cooler, just like you did with “Making a Murderer,” one of the very shows it satirizes.

Tyler Alvarez stars as the primary P.I. (preadult investigator), a high school student who is trying to unravel the mystery surrounding a series of phallic faculty attacks. With a fellow classmate expelled, accused of spray-painting penises on the vehicles of staff, Alvarez dives deep into the crime, peeling back the layers to reveal that there’s more to the scandal than meets the eye.

Alvarez, who has previously starred in “Orange is the New Black,” and the Nickelodeon series “Every Witch Way,” is prepared for what “American Vandal” could do to for not only his career, but inadvertently, to his private life as well, though he knows there’s no guarantees in the business of Hollywood.

We recently sat down with the Bronx native to discuss the process of shooting “American Vandal,” why he thinks it works so well, and the weirdness of aging beyond his teens.

TrunkSpace: Your new Netflix series “American Vandal” is due out tomorrow. Are you pumped for it to be released and to see how it is received or do you kind of separate yourself from things once you wrap a project?
Alvarez: I’m really excited about the release. I try my best not to read the comments online and read reviews and stuff like that, because sometimes it can become addicting and consuming. So, I try my best to steer clear of it. I kind of try to get my information from other people. I try not to read it myself, though, because it can get a little consuming.

TrunkSpace: With it being an eight episode run and with how it’s all being rolled out at once, does it feel a bit more like a movie than a series in terms of the experience?
Alvarez: You know, we shot completely out of order, and since it’s a documentary, we cut back and we use the same scene eight different times throughout the entire series. It doesn’t feel like making a movie because of how fast we move. We filmed it pretty fast. The longest process, definitely, was the voiceover, the narration, because I narrate the entire series. My character tells the story. You see the story through my eyes. That was probably the most time consuming portion of it because it was so detailed and such a large portion of this project is told that way, so it took the most time.

TrunkSpace: Did you have to wait until it was all cut together before you did your voiceover portion? 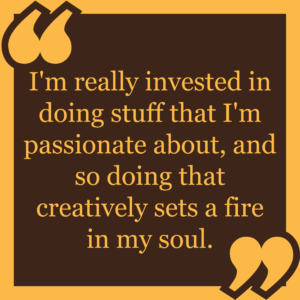 Alvarez: Yeah, they would cut the episodes together as a rough cut, and then they would send it to me and I would be able to watch it. So, I’ve already seen the entire show, I just haven’t seen it fine-tuned and edited to a tee.

TrunkSpace: That must be an interesting process because you’ve technically walked away from the project as your character Peter, only to return to it from a different perspective?
Alvarez: Yeah. I’m narrating from a completely different perspective from when I was filming it. And, you know, as it plays in the script, it’s almost as if I narrated the episode, I filmed that episode, edited it, then I narrated it, and then I went out to film the next episode. So, I constantly had to check in on my point of view and where I was in the story, which can get a little confusing with a crime story and me as the investigator. I have to know every single detail about every single person. I really committed myself to learning and knowing everything. It was difficult to play, but it was so much fun.

TrunkSpace: It sounds like it was almost a project within a project.
Alvarez: It really was.

TrunkSpace: So, for you, in terms of your career, do you view this project as entering a new stage where you’re tackling more mature content?
Alvarez: Yeah, I do. You know, I worked with Nickelodeon as a kid… and I’m still a kid. I mean, I’m turning 20 next month. That’s a little weird. I’m no longer a teenager.

TrunkSpace: Wait until you turn 40! That’s where it gets really weird!
Alvarez: (Laughter) No, I know, I’m going to be saying that before I even know it.

But, yeah, it does. I’m really invested in doing stuff that I’m passionate about, and so doing that creatively sets a fire in my soul. I feel like this is one of the first times that I’ve worked on something where I’m really invested and proud of the art that I was making, and I really felt that I was creating something unique. I was also on “Orange is the New Black,” so that was kind of a venture also into the direction that I want to head in, but I’m a series recurring on that, so I’m not as prominent. This, where I’m the series lead, it really establishes my footing in this sort of direction.

TrunkSpace: And as far as concepts go, “American Vandal” is both unique and yet still recognizable because it satirizes some of what Netflix has already had great success with.
Alvarez: Oh yeah. I think once everyone sees it, they’re going to be like, “How didn’t we not think of this before?” Our creators, Dan (Perrault) and Tony (Yacenda), they really struck while the iron was hot with this one, and I’m really fortunate to be a part of that vision.

It’s so specific with the satire and how it’s satirizing “Making a Murderer,” and a lot of it also resembles “Serial.” But you also don’t necessarily need to know what exactly we’re satirizing to understand it and appreciate the show. It’s a comedy, but it’s just as compelling and interesting as it is funny, and I think that’s something that, when I read the scripts, I was really excited about. We weren’t pushing for jokes, you know? Everything is really planned out. As a writer or a director, I would never be able to put this thing together in my head. It’s so intricate. I would have gone crazy. I’m happy that I just got to see what it was and then memorize what I have to know. (Laughter)

TrunkSpace: We know you mentioned that you stay away from reviews and what’s being written about the show, but we saw one that said it was, “One of the best things Netflix has ever done.” Given the track record of Netflix, that’s high praise.
Alvarez: Yeah. I saw that also. I wouldn’t have seen that, but my director and my agents were like, “Did you see this?” They texted it and I was like, “No, don’t show this to me!” (Laughter)

See, I try my best, but it’s really hard.

TrunkSpace: With so many devices in our lives, it’s getting harder and harder not to pay attention to the stuff we’re trying to not pay attention to.
Alvarez: I really try to limit myself to Instagram with social media. I try to be like, “Okay, I’ll look through my Tweets and my captions and I’ll post a photo one time a day,” but that one time a day turns into like four times a day. But, again, I try.

TrunkSpace: By the end of the day tomorrow, people could have easily consumed all eight episodes and in doing so, your life could completely change overnight. Is that something you think about?
Alvarez: You know, that’s exciting, but something that I’ve been learning in my young adult life is that nothing’s guaranteed. So, I’m letting that be a possibility, but not getting attached to the end result. It’s definitely a possibility, and that would be awesome and also difficult at the same time, I think. Being in the public eye could also be very difficult, especially at a young age when you’re trying to figure things out. Life’s unpredictable.

TrunkSpace: It’s always said, don’t plan life to go one way because it will inevitably go the other way on you.
Alvarez: Always! I used to think that I was in control of everything. I thought that if I did A, B, and C, that D would happen, but I’m starting to realize you can do A, B, and C, and that’s just what you can do… try your best.