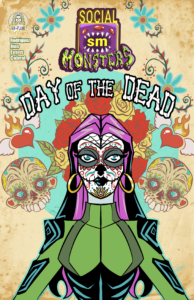 TrunkSpace: How would you describe your writing style? What kind of writer do you hope to be?
Rodríguez: Well, the first question is a though one. I would say that I truly care for the dialogue as much as for the action shown in each panel. And I like to break the story down in rough thumbnails, in order to get a sense of the rhythm and space available to the artist.

As for the second one, that’s easy: I hope I could be a writer capable of conveying emotions in the reader. If they put down the book – or the device of their choosing for that matter – and keep thinking on the characters and the story they’ve just read… well, I think I could say it was a job well done!

TrunkSpace: How important were comic books in your life growing up and is that where you discovered your love and inspiration for writing?
Rodríguez: Comic books were always around since I was a little kid. My parents used to buy them for me to keep me busy while we were in the waiting room of a hospital, for example. In those prehistoric times, internet wasn’t around to offer hours of entertainment at your fingertips, therefore, reading comic books was the best way to make your imagination fly to strange and fantastic worlds.

As many kids, I also wanted to make comics, and I used to think that a single person did all the work I read in those pages. I wasn’t really aware of what the job of a writer was in terms of comics until I was maybe 12 or 13 years old, and I started noticing familiar names in the credits pages. Names like J.M. DeMatteis, Dennis O’neil, David Michelinie, among many others.

Then, I read my first Sandman collection by Neil Gaiman, and that’s where I truly understood what a comic book writer could do. 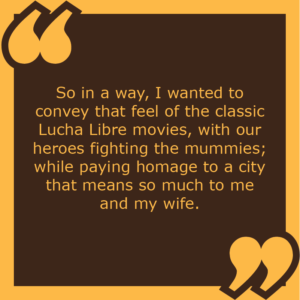 Rodríguez:Yes! I fell in love with all Spider-Man titles of the early 90’s. I loved that sense of a shared universe with other Marvel characters, and I felt the same way when I discovered Batman and the DC universe as a whole.

TrunkSpace: Is there a specific title or character that you’d like to work on in the future and why?
Rodríguez: The X-Men. I think Stan Lee described them perfectly: The Strangest Super Heroes of All. That’s what they are to me. Yes, they do some super hero stuff, but they are much more than that. They are family, and their adventures are a soap-opera as much as a super hero story.

TrunkSpace: What would you say is your greatest strength as a writer?
Rodríguez: I think I’m fairly capable of understanding the characters and finding behavioral patterns. That helps me to keep the characters consistent with their actions and their dialogue; and I think that is something the reader appreciates, perhaps even in a subconscious way.

TrunkSpace: You are stepping in as guest writer on the Neymar Jr. Comics series Social Monsters with the Day of the Dead Special, set to debut October 31. Did you feel pressure working on a title that has such a big, universally known talent involved in Neymar Jr.?
Rodríguez: Well, yes…and no.

“Yes”, because when I started typing Saber’s dialogue I went like, “Wait a minute! This guy is a Neymar Jr’s proxy! A proxy for the football star my dad watches on TV every week! I have to make him sound cool!” And that’s real pressure there, you know?

And “No”, because I knew I had the guidance and mentoring of seasoned comic book pros- like Head Writer and Editor in Chief Jason M. Burns – who are always taking good care of such an important IP as the Neymar Jr. brand. I knew that I could count on them to provide me with the best insights and direction for the story I wanted to tell.

TrunkSpace: What was your approach like as a whole when you started working on the issue? What did you want to achieve?
Rodríguez: Since it was a Day of The Dead Special, I knew I wanted to take our characters to my country, Mexico.

The “problem” was that we have hundreds of museums and items to choose from to create an entertaining and educational story, so I had to narrow my options down to those related to the “Day of The Dead” or “death” as a concept. And then I remembered that we already have a classic “monster” to fight with. One that our typical “super heroes”, the Luchadores, have fought before: The Mummies of Guanajuato. So in a way, I wanted to convey that feel of the classic Lucha Libre movies, with our heroes fighting the mummies; while paying homage to a city that means so much to me and my wife.

TrunkSpace: Although grounded in reality from a historical sense, the Social Monsters series is very much the kind where anything is possible. How much fun is it writing in a world where there are really no boundaries to what you want to put on the page as far as your imagination goes?
Rodríguez: It’s liberating! But at the same time, it poses quite a challenge, because in a world where not even the sky is the limit, it is tempting to “abuse” that power in terms of story, and there’s always the risk of making the story too far out, or the characters too powerful for the reader to even care for them and their exploits. And that’s also the fun part, you know? To find the best way to tell a fantastic story but keeping our characters close to the reader.

TrunkSpace: What are you most proud of with your work on Social Monsters?
Rodríguez: The fact that I could have our heroes coming to Mexico, because that way, I was able to share a little bit of our culture with our readers, while keeping true to the essence of what Social Monsters is about: entertaining and educational content for readers of all ages.

TrunkSpace: You also run a podcast about all things comic books. Can you tell us about that and how it came into creation?
Rodríguez: Sure thing!

I started toying with the idea of hosting my own podcast while listening to the very scarce comic book-related podcasts in my country, back in 2012. One day, I was invited as a guest in one of those podcasts, and I took mental notes on how it was made. So, I started out recording audio on my mobile phone and mixing it (poorly) with a simple audio edit software I found online. That’s how El Café Comiquero (The Comic Book Coffee Shop would be the most accurate translation) came to be.

The first 10-15 episodes were… not bad, but far from “good”, since it was only me, talking non-stop for an hour or so. Until I found my partner in crime: my own brother, Raul. Not only did we grow up together (obviously), but we also grew up reading, mostly, the same comics and watching the same movies and TV shows. So, one day I asked him if he would be interested in co-hosting the show with me, he said yes, and 329 episodes later, I can tell you that this podcast have become an essential part of our lives.

In this podcast we talk about all kinds of comic books, movies, TV shows and pop culture-related topics. You can find us in almost all major platforms such as Spotify, iTunes or Google Podcast under the name “El Café Comiquero”. And, you can also follow us on Facebook, Twitter and Instagram as “El Café Comiquero” as well.

If you speak Spanish – or if you are taking Spanish lessons – and want to practice it a little bit while listening to some nice geeky content, give it a try and tell us what you think.