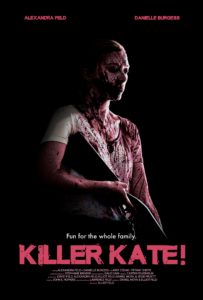 Chilling Out is where TrunkSpace talks all things horror and genre with those who work in the projects that give us the thrills and chills to keep coming back for more. This time out we’re chatting with Alexandra Feld, producer and star of the new film “Killer Kate!,” which arrives in select theaters and on Digital HD today.

We recently sat down with Feld to discuss the horror fandom, how her family helped to make “Killer Kate!” a reality, and the reason the film – their first – finished on time and within budget.

TrunkSpace: As you gear up for the official release of the film, what emotions are you juggling with?
Feld: It has been an amazing process to get to this point, but I’m still in producer-mode leading up to the release, so I’m not sure I’ve had time to process the emotions of it all yet. I’m definitely excited for the film to come out and interested to see how it’s received! I’m sure there will be some relief once the film is out but also bittersweet because “Killer Kate!” has been such a part of our lives over the last year. That being said, I’m excited to shift focus and begin something new!

TrunkSpace: You wore multiple hats in bringing “Killer Kate!” to life. How much of your blood, sweat and tears went into making the film a reality? Was there ever a moment when you doubted it would happen?
Feld: I had the wonderful opportunity to produce on this film, my first feature as an actress. As part of the film since early development, I was able to be part of the creative process, including casting, selecting locations and crew, all the way through notes on the edit, which really allows you to get close to a project. We had originally planned to shoot another script last November, but a few months prior to pre-production we decided to put that script on hold due to budget and location constraints and create a new script around our resources. We knew we were going to shoot in November of 2017; we had our director, lead actress, and budget number, so that’s where we began. There was never a moment when I thought the film wouldn’t happen. Our production company, Feld Films, is comprised of myself, my husband (director Elliot Feld), my brother-in-law, David Feld, and my father-in-law, Larry Feld – it’s a true family business, and we work extremely well together. We 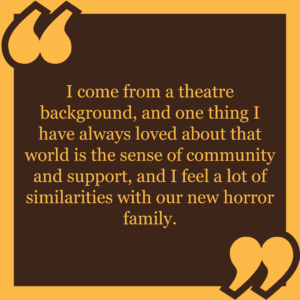 are a pretty driven bunch and time is valuable, so once we made the decision to shoot, it was going to get done because it had to. We work full-time in the commercial world, so we are used to quick turnaround and working with very strict budgets, which lends itself well to indie filmmaking.

TrunkSpace: Did producer Alexandra and actress Alexandra ever butt heads in terms of what one knew was possible to accomplish and what one hoped was possible to accomplish? How do you find the middle ground between the creative wants and the day-to-day needs on set?
Feld: This is something we were all aware of and tried to set ground rules early on. Once we got to our shoot days, the plan was that I take my producer hat off entirely and just focus on acting, but that was better in theory! (Laughter) It took two days or so to get into our groove and quickly learn that I was most comfortable staying involved in certain parts of day-to-day production life. It’s certainly a delicate balance and something I will continue to learn as I follow this path, but I love being able to use both sides of my brain on set. Having other things to put my energy into also allowed me not to get inside my head as an actor, and it really challenged that “acting muscle” as far as turning it on and off – I loved it!

TrunkSpace: In the film, you play THE killer Kate. Because you were involved in the project on numerous levels, how did you see the character grow from where she was in the early stages of development to where she is in the final cut of the film?
Feld: If I remember correctly, Kate didn’t start out quite as likable or relatable. She was a little harsher and more sarcastic, but not in a fun way. After a few read-throughs with our co-writers, Elliot Feld and Daniel Moya, we all agreed to work on making Kate more authentic. I mean, sure, it’s great to have flaws in the characters, but in this case, you really have to care about Kate and her sister Angie; you have to root for them to get it together because, ya know – family!

TrunkSpace: Independent films are often operating on a limited budget, which means limited time. Did you have to make any on-site adjustments that weren’t in the script that ended up making it into the film, and in doing so, made the film stronger?
Feld: Yes, actually! So, we shot this film in 10 days, with two days of pickups which, if you’re unsure, is an insanely short shoot schedule. We had a director with a strong vision, a DP who loves to try anything, an incredibly talented cast, a rock-star crew, and the best 1st AD one could dream of – it’s this magical combo that allowed us to get our film made on time and on budget.

TrunkSpace: What are you most proud of with the film?
Feld: Honestly, there are so many things, but I am most proud of my family. First off, I got to work with my husband, who’s drive and passion never cease to amaze me, and working together in the actress and director capacity was really special. Next, my producing partner and brother-in-law, David Feld – the level of trust I have with him is next level; he is so good at what he does! Lastly, my mom was the production designer (Stephanie Brewer), my dad the art director (Keith K. Brewer), my brother the prop master (Justin Brewer), and my sister the wardrobe designer (Kevynn Brewer). Looking back on it now, it still feels unbelievable that we had this opportunity to work together in this capacity! We could not have done what we did without the closeness, ease of communication, and intuition that comes with family. Even our dog, Daisy, came to set with us! It was a wonderful, comfortable, positive environment that allowed everyone on set to feel like part of the family.

TrunkSpace: Horror fans are willing to turn out for a film regardless of if they know anything about the film or not. Do you feel like the genre comes with a bit of a built-in audience, and if so, does that put more or less pressure on you with a film like “Killer Kate!” and being accepted by that fandom?
Feld: Oh, man, I think we’ve been totally spoiled by the horror fan community for our first film! I come from a theatre background, and one thing I have always loved about that world is the sense of community and support, and I feel a lot of similarities with our new horror family. I suppose if there is any pressure it’s that I love horror audiences, and I just don’t want to disappoint. Of course, I know our film may not be all horror fans’ cup of tea, and that’s totally cool, because, even still, everyone has been so supportive and enthusiastic, which I’m so grateful for!

TrunkSpace: Aside from making a quality film, do you hope that “Killer Kate!” will open up more doors for you, both in front of the camera and behind it?
Feld: Yes, absolutely! I am an actress, first and foremost, but it’s a tough business. As I mentioned, I began in theatre, but I moved to LA to transition to film, and, after a few years of auditioning for mediocre roles, stereotypes, and reading bad scripts, I realized I needed to diversify and start producing. I took four years off from acting to start from the bottom and learn the behind-the-scenes, so I could jump back in as a producer/actress and have a creative hand in the projects I was a part of. “Killer Kate!” is my first project back in the acting game, and boy, is it good to be back!

TrunkSpace: This is an industry with so many question marks, and often, so much is dependent on the decisions of others. Do you feel like you’ve been able to control your own destiny a little bit in bringing “Killer Kate!” to life?
Feld: Entirely! Again, it’s why I decided to become a producer. I am a creative person, without a doubt, but I am also very business minded, owing in large part to the home I grew up in, where both were of equal importance. It’s also key to be wise with whom you surround yourself and also open to different thoughts and ideas. I was able to have a lot of influence on my role as Kate and the film overall, but I also trusted everyone on our internal team and then the key crew we hired.

TrunkSpace: Super general question, we know, but what’s next? After “Killer Kate!” is released and you’re able to come up for air, what project will you be breathing in?
Feld: Well, my current “day job” is as a commercial producer, so I’m always busy behind the scenes, but we do have a horror short film we are prepping for which Elliot will be directing. Beyond that I really hope to be sinking my teeth into another juicy feature part soon! We have a few scripts in development, so I’m excited to see which one we’ll be diving into next. Keep your eyes on IMDb, and follow me @AlexandraFeld on Instagram for more updates!