TrunkSpace: As a genre, country music has gone through a lot of shifts and changes throughout its storied history. Where do you see your particular flavor of country music fitting into things? Do you hope to bring a bit of the past and the present to what you’re doing?
Alexander: Yes, exactly. There has been a shift toward introducing pop/electronic elements into country and I love that. I love listening to it and definitely want to experiment more with it myself. But with the songs I released after “Cruel,” the three others on my EP, I was drawn to them because they were a little more traditionally country than what is being released by young females in country music right now.

TrunkSpace: As a genre, country music is more mainstream than ever before. In many ways, country artists have become the pop stars of the time. Does that put extra pressure on an up and coming artist like yourself to pay extra attention on your overall look, brand, and public persona?
Alexander: My look and brand are definitely elements I’m conscious of, but at the end of the day, no matter how perfect those things are, the music has to stand for itself. That’s really my focus. I want the rest to just enhance what’s already there.

TrunkSpace: It seems like it could sometimes be difficult for young female musicians/artists to be recognized for their music alone and not have the focus be on their physical looks, either within the industry itself or in the media. Have you found this to be true for your own career… wanting people to recognize you for your creative talents alone, and if so, how do you navigate that?
Alexander: “My looks” have definitely been a topic of conversation when discussing my brand and my music because you’re right, people do want to talk about it. Despite that, it hasn’t been something that has really bothered me because it’s never been, “Oh, well at least she’s pretty.” It’s just been part of the package that comes with my music. I feel really lucky that the people I work with value my music and my personality and everything else that I bring to the table because at the end of the day that’s what lasts.

TrunkSpace: Your mother was a classically trained vocalist. How much of her is in you and your music, either through direct training/advice 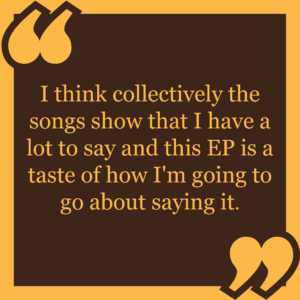 or through osmosis?
Alexander: People have said we sound similar, but I think if anything has resulted from her influence it’s just been that the bar is set really high. I’ve adopted proper vocal technique as a staple of my recording and performing, and that’s something I definitely learned to respect because of her.

TrunkSpace: Do you think you’d be a musician and pursuing a career in music if it wasn’t for music being such a big part of your upbringing?
Alexander: I’d like to think I would because I was the one who really wanted to start playing piano. I begged my mom to let me start lessons. I think she probably would have had me wait to be a little bit older just so I didn’t burn out. I was incredibly persistent and persuasive and finally she gave in. So I would say yes.

TrunkSpace: What is your earliest memory of picking up and instrument and thinking, “This feels right?”
Alexander: When I mastered my first difficult piece on the piano, it was such a great feeling of accomplishment and it was so fun. I think that was a huge turning point for me.

TrunkSpace: What emotions did you experience leading up to the release of your single “Cruel” and was its introduction to the world one of the biggest moments of your career thus far? It seems like it would be a pretty big milestone on what will hopefully be a long career with many more milestones.
Alexander: Nervous is definitely the first word to come to mind. Nervous and excited. It was exciting that I was going to be more public about it, but I was also extremely nervous since I didn’t know how people were going to react. You’re right, it was a huge milestone for me, and hopefully not my last!

TrunkSpace: In regard to your EP, what do you hope people take from it and what do you think the collection of songs say about you as an artist?
Alexander: I hope people take away four very different messages and can relate to at least one of them. I purposely chose those songs because they each provided a different piece to a story. “Wanted” tells the story of just wanting to be wanted by someone and wanting that passion. “I Don’t Want to Catch My Breath” is a ballad about being in love and not wanting to miss a second of it. “What Love Feels Like” showcases the sweetness and innocence of a new love and it’s just a feel good kind of song. “Cruel” doesn’t have that innocence and it’s really about being burned in a relationship and overcoming that by stopping the cycle of hurting someone else because of what’s been done to you. I think collectively the songs show that I have a lot to say and this EP is a taste of how I’m going to go about saying it.

TrunkSpace: Are the songs you chose for the EP personal in the lyrical content or are they told more from a storyteller’s standpoint?
Alexander: They are very personal lyrically. I wanted these songs to be intimate so I chose messages that I could share from my perspective.

TrunkSpace: Where are you hardest on yourself as an artist?
Alexander: I’m definitely a Type-A personality, a perfectionist, so I always think, “Oh I can do it better,” and so I’m hard on myself in that respect. So many times in the studio after the producer would tell me we got it, I would say, “Just let me do it one more time.” The majority of the time I would do it better, but it was always a competition with myself. I like to leave it all on the table so I know I gave it my best.

TrunkSpace: Artists’ music popping up in films and television shows is always a great boost to the brand and licensing is one of the best revenue streams going these days. Do you have any favorite shows or movie franchises that you’d be exceptionally psyched to hear your music turn up in?
Alexander: I’m honestly a huge fan of crime or legal shows. I swear I’ve seen every episode Dick Wolf has ever produced. For movies, I love action and drama. So I don’t really see my music fitting in to content that I watch religiously, although I do love a good Nicholas Sparks romance, so I would be excited to be featured in a project like that.

TrunkSpace: When you look at your career moving forward, what would you like to accomplish? Do you have bucket list items that you want to check off in your career?
Alexander: I have a few stages that are on my performance bucket list, but right now I’m really taking it one step at a time. To get performing more often and recording some originals are next on my list. I’m really excited for what’s ahead!