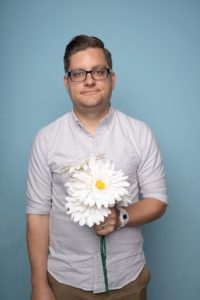 TrunkSpace: Was comedy always in the cards? Were you a “funny” kid, even at an early age?
Falcone: Yeah, definitely. Not like actually funny, but definitely trying to be. I discovered stand up in middle school, and I would memorize jokes and just pass them off in casual conversation as my own. And for years whenever I said anything remotely funny people would immediately ask, “Who’s is that?” Took a while to wash off that stink of childhood plagiarism.

TrunkSpace: When did you decide to pursue stand-up comedy as a career and did you make a plan for how you would attack things?
Falcone: From the minute I left college I knew this was what I wanted to do in some form. So I always structured everything I was doing so that I could do as much comedy as possible. I figured out how to have a freelance career, so that I would be able to take time off when needed, and then just as I got more comedy work I took fewer freelance clients. Eventually they just kind of swapped places. So now I build websites as a hobby and tell jokes as a job.

TrunkSpace: How long did it take for you to discover your voice as a comic?
Falcone: Oh, I have no idea what my voice is. A lot of people say it takes 10 years, so I’m running out of time. I have glimpses of it; I have jokes that I write now that I think I actually like, but that took like years. Really what having a voice means to me is that every once in awhile when I write a joke that I think is very funny but is not me – it’s not what I want to be putting out into the world – I don’t tell it. That’s what a voice is, it’s writing a good joke and then not telling it.

TrunkSpace: Is the approach you take now on stage different from the approach you took when you first started out? Is it one act that grew into itself or would you consider them two completely different acts?
Falcone: It was just a worse version of the same act, I think. When people start, they’re usually just doing an impression of a 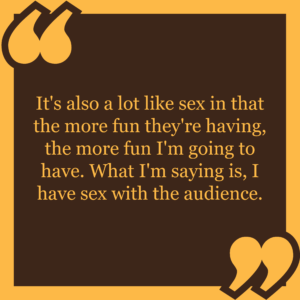 comedian they like. And I was definitely doing that. And now I’m doing an impression of the few times where I’ve really liked my comedy. I talk about somethings that are more important now, because I feel like my joke writing has gotten good enough that I can. When I was first learning, I always wanted to seem harmless. So audiences would give me the benefit of the doubt as I learned the actual skill set. So I cut my teeth telling jokes about dumb stuff like cake, and now I can talk about like, consent, in a way that is just as funny.

TrunkSpace: Is the neon “Open” sign in your brain always turned on, and by that we mean, are you always writing and on alert for new material?
Falcone: Of course, of course. I take 20 to 30 dumb notes a day of things that might be something that probably aren’t. It might not be stand up, it might be an idea for a book or for a TV show or funny way to answer a written interview question. Mitch Hedberg has this joke that really, really just nails it. He said his job is to think of something funny and then write it down, or if the pen is too far away, to convince himself it wasn’t funny. And I think that’s exactly what it is. Everybody thinks of weird, funny things throughout their days – comedians just trap every single one and then tries to squeeze it for laugh juice.

TrunkSpace: How much work goes into a joke before it’s ready to be tested out in front of a live audience?
Falcone: These days, I’m comfortable taking something that I just thought of up on stage. I have this swagger now where I know that I can either make a good effort of making it funny, or if it’s not funny, it won’t be the end of the world. I can hide it in the middle of my set so it doesn’t sabotage the rest of it. I still usually put several days of thinking about an idea and twisting it in writing on it before I go on stage, but every once in awhile I just grab something and throw it up there.

TrunkSpace: If a joke doesn’t seem to be working, how many chances do you give it in a live setting before you decide to rework it or move on from it altogether?
Falcone: I would say when an idea is new, I never tell the same joke twice. And by that I don’t mean I throw it away after one try, I just mean every time I test it, I tweak something. So it’s kind of a Ship of Theseus thing; the joke takes 30 rewrites before it’s good or bad, and by the end there’s no part that was part of the original idea. That (pretentiously) said, sometimes I put something on one time and I don’t feel a spark with it and then I throw it away. I also have jokes that I’ve been struggling with for two years that have never quite hit the way I want them to, but I keep polishing the turd because I think that there’s gold in it somewhere.

TrunkSpace: Is it possible to kill one night and bomb the next with essentially the same set, and if so, what do you chalk that up as?
Falcone: Of course. The difficult thing is that it’s hard to know exactly what it was. It’s easy to blame the audience – and it could be their fault, it sometimes is – but there’s a million other things it could be. Every set is like one of those Russian nuclear power plant control panels from the ‘60s. There’s just a million knobs, and any one of them might blow up the whole thing. So I keep twisting and adjusting and figure out which ones are dangerous and which ones make magic. 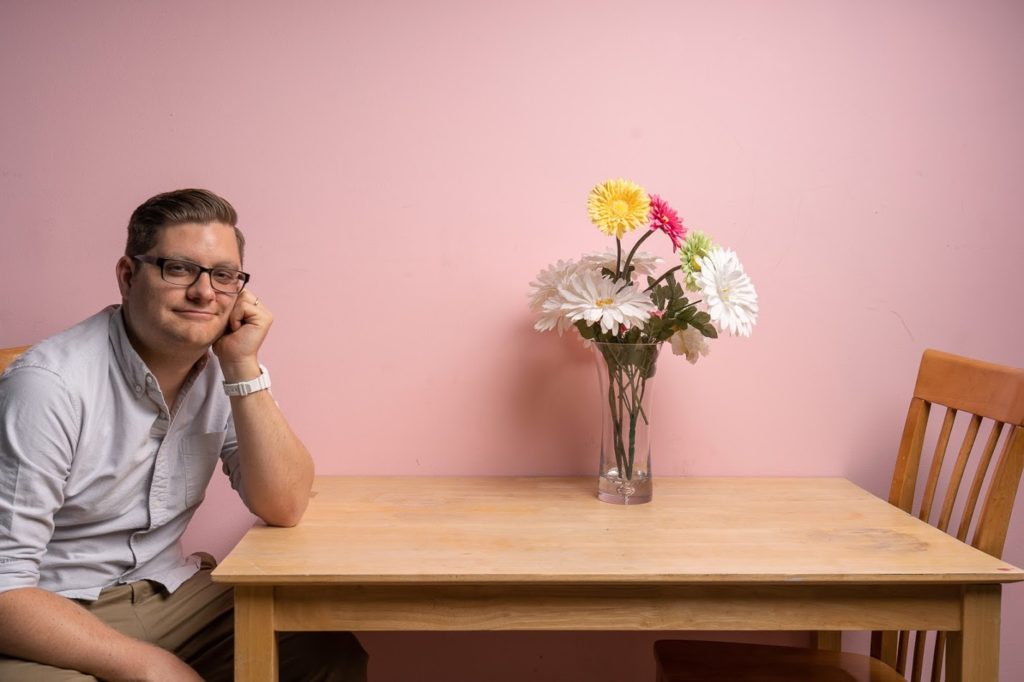 TrunkSpace: Does a receptive and willing audience fuel your fire of funny and help to put you on your game for the rest of your set?
Falcone: There’s this old saying in comedy that a good audience helps you write and a bad one helps you edit, meaning that when the audience is really loving it, I feel this confidence like I’m being held up by a wire so I can’t fall no matter how much I wiggle. And then a bad crowd, it’s like doing a tightrope without a net. I don’t take a single step off to the side because it’s too dangerous. It’s also a lot like sex in that the more fun they’re having, the more fun I’m going to have. What I’m saying is, I have sex with the audience.

TrunkSpace: What is your most memorable performance experience (good or bad!) that will stick with you for the rest of your career and why?
Falcone: I won Portland’s funniest person this summer, and that was pretty memorable. Everything just clicked that set, and I remember feeling like I was as good as I could possibly do. I also got to open for Sebastian Maniscalco last year at this like 5,000-seat theater at a winery, and the stage was like a castle. And I think about that set all the time. I remember sitting there after the show was over, I went back out on stage and I watched everybody file out of the amphitheater, and just thought, “I can’t believe I got to be here.”

TrunkSpace: How do you handle hecklers? What approach do you take?
Falcone: My opinion on hecklers is pretty controversial. I think that they’re a myth. I mean once in a million sets somebody is going to yell you suck, but 99 percent of the time somebody talks from the audience it’s just a person who’s intoxicated who thinks they’re helping. And that’s not heckling, that’s just somebody who is drunk and confused. So if you “destroy” them, you’re just a person taking time away from their job, to yell at a drunk person. And look, nobody loves drunk people, but we work in an industry that’s almost entirely funded by the sale of alcohol, so we have to tolerate them.

If you’re in a good club and somebody talks, the staff will tell them to stop. And if you’re playing bars where people just get to yell at you, then that sucks and it won’t be good no matter what you do.

Also, to be clear, this only applies to me because I’m a dude. Women who do comedy get yelled at way more often and way more things that are not helpful. But since I’m just a meh-looking dude, people don’t tend to sexually harass me on stage.

TrunkSpace: What are your thoughts on the stand-up landscape in 2018? Are you optimistic for the future of live comedy?
Falcone: Comedy is amazing right now. There’s a lot of old-time comics complaining they can’t say anything now because people get too offended, but people are always getting offended, they just now they have the ability to speak and tell the world that they’re upset. And I think that’s actually really great for comedy. You get in trouble for saying things that are marginalizing groups of people. I think right now comedy is embracing a wider variety of viewpoints in a way that is very exciting. There’s also so much good comedy right now, so many people pushing it in directions that it’s never gone before. It’s a very exciting time to be doing this.

TrunkSpace: Finally, who do YOU find funny?
Falcone: Maria Bamford is the GOAT. I think she is just brilliant. I love Jackie Kashian and everything she does. I’ve gotten to open for Demetri Martin a few times and he cracks me up. Chad Daniels is a beast. Up and coming comics like Kate Willett who just had a Netflix special, and Candice Thompson who was on “The Tonight Show” recently. My favorite people in Portland are Katie Nguyen and my friend Mohanad Elshieky who’s about to absolutely blow up. Also my wife is super funny but not a comic, she’s just hilarious for a Muggle.