Albert Tsai may be considered a child actor, but this young adult displays more maturity than most of the actual adults we know, and that’s not excluding ourselves. With an impressive career that has already spanned half a decade, the 13-year-old has mastered the art of making people laugh, which he has done opposite industry heavyweights like Malin Akerman and Ken Jeong through his early work in “Trophy Wife” and “Dr. Ken.” His latest project is the Mark Feuerstein-created sitcom “9JKL” airing Mondays on CBS.

We recently sat down with Tsai to discuss his love for entertaining, how he’s always absorbing knowledge while on set, and why individual episodes represent their own contribution to a show’s overall story.

TrunkSpace: You’ve been acting professionally for a long time now. What is it about entertaining that you personally enjoy most?
Tsai: I love making people laugh, making people happy, and that’s why I love doing comedy. I love acting because I feel like I get to play different roles and be in different lives, almost like being a different person, and playing different kinds of characters. That’s what I really love about it, and also, exploring the different stories and scripts that I get.

TrunkSpace: You mentioned getting to play different types of roles. With that said, what is your process for finding a character? How do you connect with them?
Tsai: Whenever I get a new character, I always like to look at the little description, kind of a breakdown of what the character is that they give me. I’ll look at that and then read the lines that I have in the script and just imagine what the character would be like in real life and form his personality almost. Then, after I meet with the director or producers or writers, I will take in their notes and kind of mesh it.

TrunkSpace: Do you ever get into a situation where you think you have a character figured out, and then you meet with the 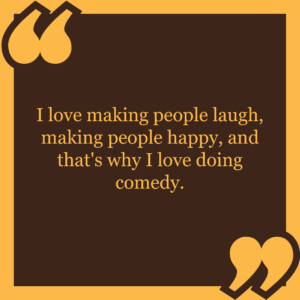 creative team and they give you insight that you didn’t consider?
Tsai: Yeah, of course. I always like to incorporate what the director or writers think because they have a hand in also creating the character. It’s just a medley of all of our notes and who we think the character is.

For example, for Ian in “9JKL”, a major part of his personality is that he is a precocious latchkey kid who sits in the lobby a lot. He’s quite mature because he talks with all the adults that come in and out of the lobby. Also, he’s a cinephile, a movie buff, so he always likes to talk about different movies or plays or whatever.

TrunkSpace: “9JKL” is another sitcom in a series of great sitcoms over the course of your career. Do you wish to maintain your path in the comedy space or do you hope to branch out and do some serious drama?
Tsai: I love comedy, like I said earlier, and making people laugh, but I think also it would be great if I could do maybe some action or adventure stuff, like a feature film. I think that would be great, and it’d be a new experience for me because those characters are different. I feel like they’re developed more heavily also, so that would be a very interesting experience for me.

TrunkSpace: And we would imagine that the timing is different? You’re not having to find a joke within the dialogue.
Tsai: Yeah, like it’s not taken beat by beat. I feel like dramas or action and adventure, feature films in general, they’re more plot driven. It’s all about advancing the story and getting to the resolution.

TrunkSpace: We actually saw that you’re producing a project right now, which is not something you tend to see a lot of 13-year-olds doing. Is that something you’re hoping to continue doing in the future?
Tsai: I’ve always been interested in the behind-the-scenes part of things. Ever since doing my first show, the ABC family comedy “Trophy Wife,” I’ve been interested in how the entire production team – the director, the writers, the cast – how we all put together a TV show and we all do our part. I’ve always loved learning about directing or producing, and I think that would be great for me to do in the future. It’d be a lot of fun.

TrunkSpace: “Trophy Wife,” “Dr. Ken,” and now “9JKL” are all shows with incredible talent both in front of and behind the camera. Do you look at your jobs as an education as well, having the opportunity to learn from all of these successful people within the industry?
Tsai: I’m very curious about what happens on set, so I always like to learn from everybody and everything that’s happening during my projects. For example, “Trophy Wife” was a single-camera comedy, and “Dr. Ken” was a multi-camera comedy. They both had different aspects to them that I learned from. I think it’s great that I’ve done different types of projects and I’m very grateful for it.

TrunkSpace: In terms of “9JKL,” how does the show and character differ from other work you’ve done? What is exciting about it for you?
Tsai: Well, my previous shows, they’ve both been family comedies, and I’ve been part of the family. I played the main characters’ son. Now I’m outside of the family, so it’s kind of a different character perspective and almost a different experience when delivering the lines and how this character, Ian, interacts with the other characters.

TrunkSpace: Would you say the comedy itself is tonally different from previous comedies you’ve worked on?
Tsai: A little bit because I feel like because the main family is all adults, it’s slightly more adult-driven even, but there’s still those family dynamics that are really fun.

TrunkSpace: You worked on “Dr. Ken” for over 40 episodes. Over 20 on “Trophy Wife.” Is it fun for you to play the same character over an extended period of time?
Tsai: Because I feel like, especially with comedies, how each episode is kind of its own isolated story – I mean, they all interlink, but they’re their own story arcs – I feel like even though I’m playing the same character, getting the script every week is really exciting for me because it’s a completely new story. We might find out a new part of the character’s personality, or something really fun might happen. I feel like each episode is its own piece of the entire TV show’s story.