No, we didn’t shirk our daily responsibilities and run off into the city with Alan Ruck to take in a Cubs game and be seated alongside the Sausage King of Chicago at a fancy lunch, but that didn’t make our chat any less exciting. The star of the iconic 80s comedy “Ferris Bueller’s Day Off” has had an impressive career that has spanned four decades, but it is his most recent role as Connor Roy in the new HBO series “Succession” that has him giddy with excitement.

We recently sat down with Ruck to discuss the dramatic turn his character takes in an upcoming episode, the reason the show’s writers search for the comedy in every scene, and why he considers himself the cockroach of the acting world.

TrunkSpace: What struck us right away about “Succession” is that it’s story, character and performance, which seems to be a rarity in this super hero, everything-is-based-on-something else age.
Ruck: Yeah, it really is. It’s beautifully written. Jesse Armstrong and his gang of writers are really gifted. It’s also funny and… there’s a line in the show, I don’t know how many episodes you’ve seen, but in one of the episodes the character of Tom, played by Matthew Macfadyen, tells Greg, who’s played by Nick Braun, “Being rich is like being a super hero, only you get to wear a suit that’s designed by Armani.” In that way, I guess we are like super heroes… or maybe super villains. (Laughter)

TrunkSpace: There’s certainly a lot of villainous twists and turns. From a performance standpoint, does that help to keep things interesting for you knowing that your arc could really go anywhere?
Ruck: Yeah, it’s exciting. When I auditioned for this, just the little description on the page sent to me from my manager said this character will evolve as the series progresses. In the pilot, and in the first three episodes, I really don’t do that much. And then in Episode 4, all of a sudden I was given a certain amount of responsibility at a sort of a corporate function, and things progressed from there. And then in the second season, and I think we will get a second season, Connor’s going to pursue some political aspirations, and it’s insane.

Clearly this guy, he suffers from delusional disorder, and we were kind of discovering things as we went along. I think maybe Jesse has 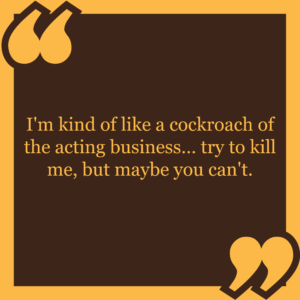 known all along, and he’s allowing me to discover these things, but it could be that Connor is on the spectrum somewhere, in terms of maybe something like Aspergers. But he definitely suffers from delusional disorder, which I found out is on the same spectrum as schizophrenia. A schizophrenic will say, “I’m becoming a giraffe,” and you’ll say, “Okay,” and then a delusional personal will say, “I’m going to become President.” So technically it’s within the realm of possibility, but not very likely.

TrunkSpace: And the character’s personal journey within the family, being that he was the son from a previous marriage, makes for an interesting dynamic.
Ruck: Yeah. The old man is hard as nails, and probably the character that’s most like him is Siobhan (Sarah Snook), who’s our sister. She’s just as tough and smart as him, and ruthless. But the old man is not really heartless, and I actually think he feels a little bit guilty about Connor, because that marriage was a disaster, and then my parents got divorced, maybe when I was eight years old, so in a way I think maybe the old man thinks that he kind of abandoned me or stranded me. But for all of us, for all the kids, really the driving force is to win the old man’s approval. For Connor, here’s a guy in his 50s, and he still wants daddy’s approval. It’s sad.

TrunkSpace: Which brings me to our initial thought when we first heard about the series. “This is the really dark version of ‘Arrested Development’.”
Ruck: (Laughter) Absolutely.

TrunkSpace: As twisted as the relationship is with all of the kids in the “Arrested Development” fictional family, they also are all really just looking for some kind of validation or approval.
Ruck: Yeah. There was a movie that was made, I don’t know, 45 years ago or something – “I Never Sang for My Father,” with Gene Hackman and Melvyn Douglas. And even in that, there’s a line where he says, “Just because a person dies it doesn’t mean the relationship ends.” I think it is a life long challenge for many people to make peace with the relationship they have with their parents, or didn’t have – trying to figure that out or just get right with it.

TrunkSpace: And then you throw a business into the mix, and it becomes something else entirely.
Ruck: Yeah, and it’s fun, just because we’re talking about billions of dollars and the dynasty, and these people live in a way that most of us can’t even really imagine. So it kind of elevates it to the level of kings and emperors, and all that sort of nonsense, which makes it fun, because then it’s fabulous… in the true sense of the word, like once there was a king named Logan Roy.

It’s exciting to work on. Obviously Jesse Armstrong is such a steal for this world. He’s been fascinated by it for a while. He did write another thing about Murdoch, and then he decided to go in a more fictional vein, which I think is better, because then we can go absolutely anywhere.

TrunkSpace: What we enjoyed about it as well is that while it’s familiar ground, it also has a very unique voice and tone.
Ruck: Yeah, and I think a lot of that is Jesse and Adam McKay, and we’ve had some terrific directors along the way. Mark Mylod and Adam Arkin and Miguel Arteta and a woman named S.J. Clarkson, and they were all on the same page. And I think Adam just set this thing up with, “Let’s mine every possible comedic moment – whatever we can find that’s even vaguely funny, lets focus on that and see if it works.” Because otherwise this would by a grim business, just really examining the life of these entitled assholes.

TrunkSpace: You can really hear your excitement for the series in the way you talk about it. Do you still get the same level of excitement stepping onto a set for the first time as you did when you started out in the business?
Ruck: Well, it goes up and down, it goes in and out, and I think a lot of it depends on the material and the people involved. This time I’ve kind of struck gold, because top-notch network… I mean, if there’s a network that everybody wants to work for, it’s HBO. So right away, because they support the show and you kind of have, in a way, carte blanche – there’s no sort of censorship or anything – you can just take it where you need to. Fantastic writers, fantastic directors and top-notch cast, so it’s, “Oh yeah, I can live here!”

And then another thing we do that’s very exciting is Jesse and his gang, they write this material, and it’s wonderful, and we do the scene as written, say three or four times, and then they can’t help themselves… they have all these alternative lines that they’ve come up with. Sometimes it’s just one or two and sometimes it’s like a page and they’ll come up and go, “What do you think about this? We want to try this. How about this for the button on that? How about in this exchange with her you try out this line.” So then we change it up in the middle, which is fun, and then we’ll do that for a few takes and then almost always, Adam McKay certainly, all of them would say, “Okay, free one, just do whatever.” And what’s exciting about that is, you’ve done the scene now six times or whatever, so it’s sort of the DNA of the scene is in your bones, right? So you know what the transactions are, you know what the structure is, and then you just go and you improvise, whatever comes out of your mouth, which is pretty similar to what they’ve written, but every now and then somebody throws a curve ball, right? So now what we get is jazz, and it’s just a blast to do, because it’s like you don’t know what’s going to happen because somebody might go off, and then you just hang on for the ride.

TrunkSpace: Based of what you know of how the industry operates nowadays, do you think it would be more difficult starting out in 2018 than it was for you when you kicked off your career in the early 80s?
Ruck: I think it would be impossible. Young people come up to me and they say, “Hey, how do you get started?” And of course some of them just want to know how you get on the red carpet or how you get to be famous or whatever, but other kids, that really want to know how do you get started as an actor. I feel like I don’t have anything to offer them, because I started out in Chicago, about 1980, and it was a different world. Chicago then was sort of like Toronto, at the top of the minor leagues, not New York or LA, but it was a place where thing were happening. A lot of theater was going on, they were shooting a lot of films there… it was a location city and that’s how I got started. You could walk into any talent agency in Chicago, back then on a Wednesday, and say, “Hi, I’m new, I’m 23 years old, please take my resume,” and they would sit down, and talk with you, and say, “Okay, leave a few pictures and put our stamp on them and if anything comes up for you we’ll give you a call.” And that was kind of like a golden age, and the door was open. And now that is gone. As far as I understand, it doesn’t exist anymore. So I don’t know what to tell young people. It’s definitely harder now.

TrunkSpace: If you take the business aspect out of the equation and just focus on the craft itself, have the roles become more interesting over the years because the projects themselves have gotten more sophisticated or is it because you have lived more life and now have more interesting parts available to you?
Ruck: I’m not exactly sure. It’s probably a combination of all that stuff. I’m a funny type. I’m basically a character actor without a lot of character, and I looked very young for a long time. I played an 18 year old when I was 29. It was just the way it was for me, and then I kind of fell into a bit of a trough, where I didn’t look young enough to do that stuff anymore, but nobody wanted to cast me as a lawyer, and so I just kind of made my way, I worked in some sitcoms, finally got a good one, with Michael J. Fox, 20 years ago, and I think in a way I’m just a survivor. (Laughter) I’m kind of like a cockroach of the acting business… try to kill me, but maybe you can’t.