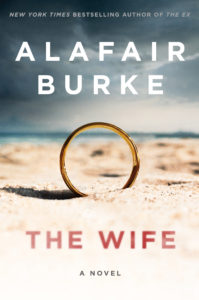 This time out we’re chatting with author Alafair Burke about her new novel “The Wife,” what she is most proud of with the book, and why she tends to goof off in six-minute increments.

TrunkSpace: You’ve published an impressive number of novels over your career thus far. With your latest, “The Wife,” having just reached the masses, do you still experience the same level of excitement/nerves that you did when you released your first published work?
Burke: Honestly? If anything, it’s worse. With the first book, it’s hard to believe you even have your name on a book. Now I have that same excitement, combined with the nerves of meeting or beating expectations.

TrunkSpace: In terms of your journey with “The Wife,” did the experience of writing and researching this particular book change in any way from your previous novels? Did the inspiration come from a different place?
Burke: Angela Powell is unlike any of my previous characters. “The Wife” was born of a single observation: when a married man is accused of sexual misconduct, the public gaze inevitably shifts to include his private partner – the wife. No matter how hard she may try to avoid the spotlight, she becomes part of the narrative. From that idea came Angela. The crime part of the book came well after I already empathized with Angela for entirely separate reasons. This book is probably the most personal one I’ve ever written.

TrunkSpace: What is your method for discovering and then unraveling the fictional crimes that take place in your work?
Burke: I always find my plots by exploring character. I know generally that something happens and then I try to think about the people affected by that. What do their lives look like in the weeks, months, and sometimes years after? What in the past brought them to that moment? By trying to look at each character’s world – past, present, and future – from that person’s perspective, somehow I manage to find a beginning, middle, and end to the story. For this book, I knew everything about Angela’s past before she met Jason, and her reasons for being so extraordinarily committed to this marriage, before I knew what Jason was accused of, what he actually did, and what would become of the accusations.

TrunkSpace: As you look back at the work, what are you most proud of when it comes to “The Wife?”
Burke: I tried to capture the complexities of sexual assault allegations, including the reluctance of survivors to come forward and the reasons they so rarely lead to convictions. I tried to delve into the reasons why women might (and do) stay silent, gloss over – even internally – violent encounters, or even find themselves apologizing and blaming themselves. At the same time, I wanted to point out that even the accused offenders have people who still love them.

TrunkSpace: Your father is an author, your mother a librarian. Was there an emphasis placed on reading in your house and how important were books to you even at a young age?
Burke: There’s no doubt having a writer for a father and a librarian for a mother shaped my passions for reading and writing. Reading was a constant – our house was filled with books, and every member of our family is a storyteller. I was convinced I wanted to write mysteries since I was a young kid, and would tinker on my father’s manual typewriter, cranking out page-turners like “Murder at the Roller Disco.” Seeing my dad write every single day, even when he was out of print for a decade, I learned (some would say the hard way as his kid!) that you need to write for reasons other than income. 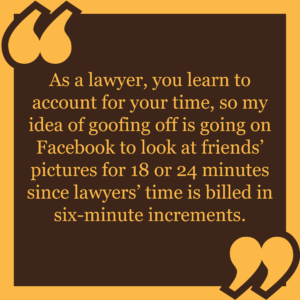 TrunkSpace: We read that it was a real life crime that first inspired you to pursue a career in criminal law and ultimately, to becoming a novelist. Upon consuming certain pieces of pop culture, many people will say something to the effect of, “that particular element of the crime was not believable,” but we tend to believe that if you can imagine it, it has probably occurred in some capacity somewhere. As someone who has seen the dark side of humanity first hand, is the line between fiction and reality not as impenetrable as some care to believe?
Burke: I grew up in a community terrorized by a serial killer who called himself BTK, a gruesome shorthand for “Bind, Torture, Kill,” and I’m sure my fascination (arguably an obsession) with crime, both real and fictionalized, can be traced to those years. But your point is well taken. Interestingly, the times I worried I was stretching the truth a bit too far in my fiction, no one thought anything of it. But the couple times people have said, “not sure that’s believable,” I could have provided footnotes to make the case that it was absolutely real.

TrunkSpace: How long did it take for you to discover your voice as a writer?
Burke: Depends on what you mean by “voice,” I guess. I think it’s clear all of my books were written by the same person, and I think the tone and sensibilities behind the written work are pretty close to the way I even talk to my friends. But I think it took me a couple of books to grow confident in my storytelling. In my early books, I often included more legal detail, both because I happen to like it but also because I suspect I was trying to prove that I had something to offer. Now that I’m more confident in my storytelling, if I find myself hauling out the legal stuff, I hit the delete key unless it advances plot, setting, or character.

TrunkSpace: Regarding the process, is writing a labor of love for you or does it feel more like labor? Do you enjoy the process?
Burke: It’s both. I understand that no one wants to hear a writer complain that the work is hard, but it is. Unlike other tasks, good intentions and strong will don’t necessarily cut it. Sometimes you try and try and the goods just aren’t there. No fun. But when the magic is happening, that’s pure love.

TrunkSpace: And what does that process look like? What are the ideal conditions for putting in a good day of writing?
Burke: My friends joke that if 15 minutes go by without something fun happening, they find me pulling out my laptop. I just try to keep enough structure in my life so I don’t miss deadlines. As a lawyer, you learn to account for your time, so my idea of goofing off is going on Facebook to look at friends’ pictures for 18 or 24 minutes since lawyers’ time is billed in six-minute increments. It helps that I have a schedule and am forced to be mindful of time. Sometimes, I just have to compel myself to write the next book. I might write 500 really bad words, but I still wrote the 500 words. Besides, there’s always revision.

TrunkSpace: Do you self-edit as you write?
Burke: I just write until I’m done and then read and re-read until it seems right to me. I get a lot of credit for good plotting, but Hand to God, I don’t write with an idea toward pace or plotting. I focus entirely on character, and it always seems to work out.

TrunkSpace: Where are you the hardest on yourself as a writer?
Burke: I always think every book is a disaster until it’s completely done, and then I usually end up thinking it’s the best one yet. Neurotic? Absolutely, but it seems to work.

TrunkSpace: What are you working on now and what will people be able to read next?
Burke: I’m working on the next Ellie Hatcher novel, which should be out in a year. Ellie leaves her work and goes home to Wichita, Kansas, which is where I grew up. I decided to take her out of New York and allow readers to meet her mom who has been off the page until now.

“The Wife” is available now from Harper.