Adwin Brown has a really great outlook on fame, which a good thing considering how his career continues to build upon itself, recently joining the cast of the Netflix hit “You” in its second season. While fans have sunken their teeth into the psychological thriller, the Florida native is just as excited to be a part of it as the audience is to take it all in.

“I can’t even begin to describe how thrilling it is to be on a show that has such a strong and dedicated fan base,” he said in an exclusive interview with TrunkSpace. “It’s so fun to go on social media and see how passionate fans are about the show’s characters and the choices they make.”

We recently sat down with Brown to discuss joining a successful show mid run, not having to worry about character variables, and his views on fame in a fame-hungry society.

TrunkSpace: First, congratulations on joining the cast of “You” in Season 2! Not only is it a feat to get a show on the air, but it seems like, more than ever, it’s difficult to keep one on the air. That being said, what is it like joining a series that already has an established on-set tone? Is it a bit like being the new kid at school?
Brown: It is definitely like being the new kid in school! You’re coming into a situation where a lot of the cast/crew from Season 1 already have established relationships with each other, so the idea of trying to enter their space, personally and artistically, can be intimidating! But from the first table read, everyone was so warm and welcoming that I knew I had nothing to worry about.

The majority of my scenes are with Penn Badgley, who is truly the most genuine and humble guy; his energy alone made my whole set experience pretty dope. Thankfully, we also had a handful of actors who were in the same position as me, so we were all able to bond over similar feelings. I’m grateful I didn’t have to go through this experience as the only newbie!

TrunkSpace: There must be something nice about booking a job that already has a fan base. Is that something you think about going into a project like “You” where you know at the end of the day, people are going to be watching when it premieres?
Brown: I mean, if I said no, I’d be lying! I can’t even begin to describe how thrilling it is to be on a show that has such a strong and dedicated fan base. It’s so fun to go on social media and see how passionate fans are about the show’s characters and the choices they make. People all over the world loved following Joe’s journey in Season 1, so I have to admit there is a part of me that feels a responsibility to make sure the fans enjoy Season 2 just as much, if not more!

TrunkSpace: From an acting perspective, did you know your character Calvin’s full season arc when you joined the cast, or did elements of his journey become revealed to you throughout production? Does that impact how you make choices for a character in the early going – if in fact you don’t have the full picture? 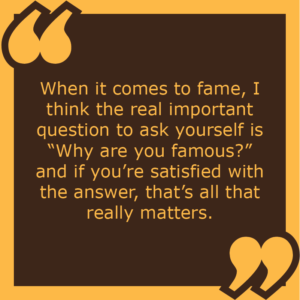 Brown: I didn’t know Calvin’s full season arc at all! Which as an actor, not only made things pretty exciting but it also allowed me to really live in the moment and focus on the situation at hand in that precise moment. I think when you know the outcome of your character’s arc, it can sometimes give you too many variables to worry about at once, so I’m glad the writers let me learn about Calvin on a week to week basis. When we would have our table reads, it was always really exciting for me to learn new details about Calvin and try and figure out how I could use those new discoveries on set.

TrunkSpace: “You” is the kind of series where there is no guarantee that everyone we’re following along with is going to make it to the end. Does that give the work a sort of creative high stakes in that, in a way, you’re kind of acting on a tightrope not necessarily knowing (at least for the audience) who is going to fall and who isn’t?
Brown: Yes, absolutely! The stakes for this show are unbelievably high and I honestly think that’s what makes it so addicting! You get attached to these characters and you want what’s best for them, but in the back of your mind… you know exactly what Joe is capable of, so you’re on the edge of your seat the entire season. I mean, I distinctly remember certain table reads where the entire cast/crew in the room audibly gasped about certain outcomes in the script. So if we were shocked about what happens in Season 2, I know our audience will be too!

TrunkSpace: Without giving away any spoilers, what are you most excited about for people to see heading into Season 2?
Brown: I’m really excited to see how fans react to the new setting of Season 2. Joe leaves New York City, and ends up living in Los Angeles… and that idea alone is so intriguing to me. He’s on the run trying to escape his past and lay low, so he decides to move to a city where everyone is literally desperate for attention? That juxtaposition is iconic.

TrunkSpace: For fans, the final product of a film or series is always the most memorable part, but for those involved in a project, we’d imagine it goes much deeper than that. For you, what is something about your time working on “You” thus far that you’ll carry with you through the course of your life/career?
Brown: When I look back on my experience working on “You,” one of the first things that comes to mind is how much I respect Penn. “You” isn’t really an ensemble kind of show, right? Yes, there are other lead characters, but the show is told from Joe’s perspective… Penn Badgley is THE lead. Meaning he’s usually the first actor called to set that morning, and usually the last actor to leave at night. He’s pretty much in every scene, and he has to do all that voice over work – which I think we can all agree is a huge part of the show’s identity. Mind you, Penn is originally from NYC where they shot Season 1, but Season 2 takes place in LA, so he had to relocate away from his family for almost five months! And not once, not once, did I ever hear him complain about anything. He showed up to work every day with a smile on his face and was nothing short of professional and pleasant. The way he treated the cast/crew is a real testament to the kind of guy he is, and I hope I can bring half that much energy to every future set I’m on!

TrunkSpace: What are your views on fame as it relates to your acting career? Is it part of the package that you have come to terms with it, or, would you be comfortable focusing on your craft and never having to be recognized outside of the work itself?
Brown: This is a good question! I do believe that when you get to a certain level in your acting career, fame does seem to become a part of the package. And to be truthful, I don’t think there’s anything wrong with that necessarily, it all just depends on what your motives are.

For example, if I shoot a feature film that I’m extremely passionate about, of course I want to do my best and make sure that people are aware of said film. So, maybe I would be a guest on “The Ellen Show” or get a spread in a popular magazine… those things could potentially make me “famous” but my motive for doing them is to further share my art with a larger audience. The issue that I think a lot of people face is they get a taste of fame, they become addicted, and they want more… and in order to get more, they change their motives. When it comes to fame, I think the real important question to ask yourself is “Why are you famous?” and if you’re satisfied with the answer, that’s all that really matters.

TrunkSpace: If someone came to you tomorrow and said, “Adwin, here’s a blank check. Go and greenlight any kind of project that you want for yourself,” what kind of project would you put into development?
Brown: Hmm… I’m not good at answering questions like this because I’m too Type A to let my imagination run this freely, but I can give you some cute highlights. It’s definitely a comedy. Will Smith and Queen Latifah play my parents. Maya Rudolph plays my bougie Aunt. Keke Palmer plays my sister. Hilarity ensues. Oh, and at some point, there is a dance number and I slay it.

TrunkSpace: What has been the highlight of your career thus far?
Brown: I feel like I shouldn’t say “You” because I’ve already been talking about it so much! But honestly, I’ve always wanted to be a part of the Netflix family, so it really has been a highlight for me. Another great highlight was doing “Will & Grace,” that’s something I’ll never forget. It’s an iconic show with a hilarious stellar cast and I can’t believe I got the chance to watch them work for a week – a definite crash course in doing a live comedy television show! I soaked it all in like a sponge.

TrunkSpace: Time machine question. If you could jump ahead 10 years and get a glimpse of what your career looks like a decade from now, would you take that journey? If not, why?
Brown: Wow, we love a time machine question! My answer would have to be a solid NO, simply because I’m enjoying the present too much. Life is meant to be full of surprises, right? Why would I skip all those chapters in my book of life when the one I’m on now is so damn good?! I’d rather just keep going page by page.

Season 2 of “You” streams on Netflix December 26.