For Pennsylvania-born actor Adam Huber, star of The CW’s Dynasty, going from recurring character to series regular on the rebooted primetime drama has been a real game changer for both his past and future in the business.

“Dynasty has given me my first real shot at this career,” he said in an exclusive interview with TrunkSpace. “Everything I did beforehand was leading up to this moment.”

We recently sat down with Huber to discuss being where he needs to be, the long road ahead for his beloved Steelers, and why his younger self would be surprised to hear that he wasn’t playing professional golf.

TrunkSpace: Dynasty recently returned after its mid-season hiatus. As an actor on a weekly series, how does your life change when the show is physically airing? Are you recognized more and is the work more of a focus when it’s under the fan microscope?
Huber: It honestly doesn’t change too much. We film about nine months out of the year. Twenty two episodes is a lot for one season. So, while it is airing, we are still shooting. I think we are on Episode 18 right now, and 12 is just about to air. It’s pretty crazy how fast the turn around can be from the moment we get done filming an episode to how quickly that episode airs. I definitely get recognized more. That’s a new thing for me. I think the first time it actually happened I just kinda looked at the girl, because I didn’t know what she wanted. Then it hit me, and I was like, “Oh shit, that’s right. I’m on a TV show.” When people do recognize me, it’s almost as if they don’t remember where they have seen me, and then it’s, “Are you on a TV show?” or “Are you that guy from Dynasty?” It makes me happy when people do say something because I like interacting with the fans of the show, see how they like it and their thoughts on where the storylines are going. And without the fans watching it, we wouldn’t still be on the air.

TrunkSpace: As a whole, where has Dynasty impacted your life the most? How has it altered your path?
Huber: Dynasty has given me my first real shot at this career. Everything I did beforehand was leading up to this moment. It hasn’t changed my overall life too much. I’m still just a normal guy from a small town in Pennsylvania. But as far as a career… it’s going to help a lot. I mean, I went from a guest star/possible recurring character to a major recurring character and now to a series regular. I think that shows my dedication and work ethic. It’s going to be interesting to see where my career goes after Dynasty because now I have proven to myself and other people in the industry that I can do this, and I am exactly where I need to be.

TrunkSpace: You’ve spent over 30 episodes playing Liam thus far. What is it like spending that much time with one character? At what point in the process do you start to feel like you know him as well as yourself? 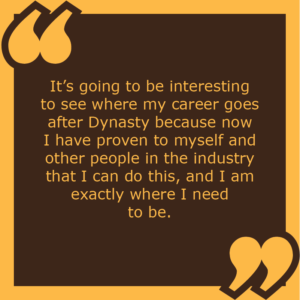 Huber: This is the longest time I’ve gotten to play one character. It’s been fun. It gives you time to really get to know someone. As weird as it sounds, it’s like you kind of become friends with your character. We are very different, but then in some ways very similar. And with every character you play, I feel like you put a little bit of yourself into them. It’s kinda hard not to. It’s been a lot of fun. And just like the fans, I also can’t wait to find out more about Liam and his backstory and his life. With almost every new episode, the writers bring something more to the table with him that I didn’t previously know.

TrunkSpace: What is the most exciting aspect of getting a new script and seeing where your character is going week after week? Is the sort of macro arc more interesting than the smaller details that round out the character over time?
Huber: I love getting new scripts. The moment we get it, I immediately start reading it. It’s hard sometimes to see the macro arc because while we are filming, say Episode 18, the writers are still perfecting Episode 19. So, you kind of live in those one to two episode arcs sometimes. But with having a pretty firm hand on who Liam is based on his actions and motives from script to script, I get to see what he wants in his life as a whole. What he wants his life to be like in the end. And like I said, with every new script we get, the writers add something else about Liam that I did not previously know. So, that’s always fun finding more info out about your character.

TrunkSpace: For fans, the final product of a film or series is always the most memorable part, but for those involved in a project, we’d imagine it goes much deeper than that. For you, what is something about your time working on Dynasty thus far that you’ll carry with you through the course of your life/career?
Huber: Oh wow. I mean every day on set for me is a huge learning experience. This is the most time I have had to be on set, so I am like a sponge just absorbing everything I can. But I proved something to myself with Dynasty. We all have those voices in the back of our mind sometimes saying that we can’t do something, we should give up, we’re not supposed to be here. I was able to silence some of those thoughts that got in my way. Which has allowed me to really come into my own while filming this show. And that is going to help with everything and every show I do moving forward. But then also hearing people, whether they be other actors or crew say kind things about you and that they like working with you or that you’re such a joy to work with, it definitely helps. I don’t want to be that selfish asshole actor that people go, “Oh no, it’s going to be that kind of day,” when you show up on set. Knowing that people enjoy working with me and that I help make their job easier… that’s definitely something I will be able to take with me anywhere I go. Being a good person isn’t hard.

TrunkSpace: From what we understand, your passion for acting began on the stage. Is the stage still a calling and what does performing in front of a crowd do for you that no amount of on-camera work could achieve?
Huber: Yeah, I found acting in college. The stage doesn’t lie. You don’t get to go back to one and start the scene all over again because you forgot the line. I would love to do some plays in the near future. There is something about living and breathing on stage from start to finish during a play that is so moving. Telling and seeing the whole story in two hours versus two whole weeks of filming is just so different. You can’t just show up to work not knowing your lines and not doing your homework. You have to take it very seriously, prepare, prepare and prepare more. You mess up on the stage… everyone sees it. And it’s not a good feeling. Breaking character on the stage can be such a disaster.

TrunkSpace: You’re a Steelers fan. What are your feelings on the future of the team, at least in the short term?
Huber: Oh boy. (Laughter) Who knows. I just hope we can get back to the Steel Curtain days. I think we need a new quarterback. Ben has to retire. I think the next few years are going to be very fun for them. We have a lot of young talent there, so it is going to be very interesting to see what they evolve into.

TrunkSpace: If you could sit down and have a conversation with your 16-year-old self, would he be surprised by the trajectory of your career, and if so, why?
Huber: A little yes and a little no. I always was one of those kids who wouldn’t try something if I didn’t think I could do it really well. I hate being bad at stuff. And I don’t like trying things just for fun. I could full steam ahead and sink my teeth into it. I think he may be a little surprised I chose to be an actor as a career path instead of trying to be a professional golfer. But I don’t think my 16-year-old self would be too surprised where I got. He knew it was in me the whole time.

TrunkSpace: What has been the highlight of your career as a whole thus far?
Huber: Dynasty has been a major highlight and being nominated for a Teen Choice Award when I wasn’t even a regular character on the show. Getting to this point has been a highlight. Working my way from guest star to series regular. Having a team behind me that believes in me. There have been highlights every step of the way. And like I said… just getting to this point, I have proved a lot to myself. And I now know that I have business in this business. I can’t see myself doing anything else.

TrunkSpace: Time machine question. If you could jump ahead 10 years and get a glimpse of what your career looks like a decade from now, would you take that journey? If not, why?
Huber: Oof. Good question. I mean, everyone wants to look into the future. But I think, if I did, I would freak myself out. I would like to go ahead 10 years to see where we are at with other things like space travel, technology and politics. But I wouldn’t want to know what I am doing, because then I would be questioning every move I made. Is that the right move or the wrong one. You alter one thing from the past, it can change the future just like that. So no, I wouldn’t want to look to see where my career was at. I’m enjoying the ride and the journey so far. That’s half of the fun.