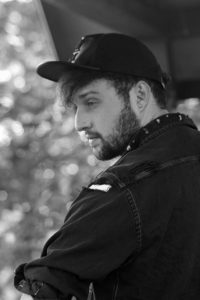 Next up we’re chatting with star Adam Carbone to discuss fighting for the role, proving through his performance that he was the right choice, and why he’s hoping “Randy’s Canvas” will serve as a multi-layered calling card.

TrunkSpace: You began working on “Randy’s Canvas years ago.” Why was it important for you to be a part of this film and get the story out into the world?
Carbone: I think it is very important because, at least to me, it gives more of a mass understanding of autism in general. Even myself, before I started the movie, I didn’t really know too much about it. I knew friends who had it, but I just never understood it. Once I started researching for the film and studying with kids from the Autism Project, I really started to grasp what it was and really understood what it’s like to have autism, or to be anywhere on the spectrum. It’s very different. It’s not just a broad stroke, which is what I thought before. It’s individuality with autism sprinkled on top, and at all different levels and with all different capabilities. I think it’s important for the world to know that these kids, or anybody with autism, can still function and have a normal l 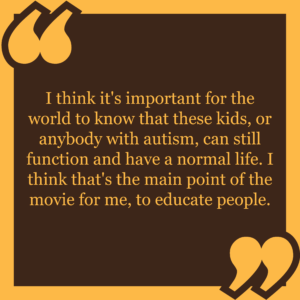 ife. I think that’s the main point of the movie for me, to educate people.

TrunkSpace: Did you gain a better understanding of how Randy saw the world by sitting down with the kids from the Autism Project?
Carbone: Yeah, I did. Actually, a lot of them are still my friends and I do other films with them and stuff now, too. It was really cool, because they all have their own quirky personalities, and they’re all good at something. It’s just really cool to see the differences in them, and really realize that they’re just people who just happen to have autism at different levels of it. That was the eye opener for me, because I just didn’t know too much.

TrunkSpace: Randy is a big character to tackle because of the size and scope of the role. Did you feel pressure carrying the title character of the film?
Carbone: Yeah, definitely, because to me, when I first read the script, it was a lot of dialogue and I always consider myself to have a bad memory. I was like, “Oh, this is gonna be so hard!” (Laughter) But, it actually wasn’t. I kind of got right into it and I just became Randy. I literally just blocked everything outside of my mind, and I just got into it. One of the things that Sean (Michael Beyer), the director, taught me was just to listen to the other people’s lines. “Just listen to them and you’ll react accordingly.”

But still, it was little bit overwhelming because it’s the anchor of this film, and it’s all about Randy. It was very important to me to be accurate with the autism, and not to let the people at the Autism Project down, or anybody with autism, or anybody that wants to learn about autism. But, something deep down inside me knew I had it, and it was almost to prove people wrong, because I’m kind of a newcomer when it comes to drama acting. A lot of people didn’t believe in me. They were like, “Oh…” They were kind of questioning the director. To me, it was like, “Oh, that’s a challenge!”

TrunkSpace: You had a relationship with Sean prior to working on the film together. Did that make it easier for you… more comfortable… to just jump in and hit the ground running?
Carbone: I think that was the key to it. Sean just knew that I was right for the role. I think we both knew that, because I’m kind of quirky and strange like Randy is, in person, as well. Yeah, it definitely helped knowing Sean before. We had a working relationship for years.

TrunkSpace: You mentioned that a lot of people didn’t believe in your ability to carry the role of Randy, but Sean did and he really fought for you. Was that a confidence boost?
Carbone: Yes, it was, because I felt like the whole world was against me being Randy, and then Sean was like, “Just trust me on this one. He’s got it.” That definitely helped. So that’s deep down when I knew that everything was fine, especially after we did my first scenes. I think the first scene we shot was when I freaked out at the gallery. Just in that scene alone, that was when I even felt it, because I was like, “Wow. Okay, I get who Randy is now. I get how he ticks and how he works.” It was another person and I was almost like a vessel for him – it wasn’t even me. It was like autopilot.

TrunkSpace: You served as producer on the film as well. Is it your hope that “Randy’s Canvas” will serve as a calling card of what you’re capable of, not only as an actor, but behind the scenes as well?
Carbone: Yes, absolutely. I think that would definitely help me in my career, because I definitely want to do more. I come from a comedy world – I do a lot of standup comedy and comedy sketches – so to me, just to prove even to myself, “Look what you did. Look what you can do.” It kind of gives me hope for the future stuff, especially producing. I wear many hats. I produce, I direct, I act, I write, I edit – all that stuff. So it’s exciting just to show the world, “Look, hire me.” (Laughter)