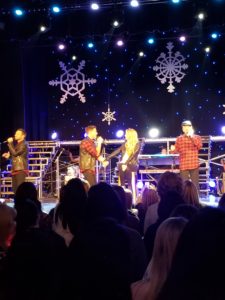 The Reason We Went: Discovering fun holiday-related things to do throughout the month of December always gives a shot to the arm of the ye olde spirit meter. The childhood-like nostalgia of hearing harmonized vocal renditions of Christmas classics is about as good as it gets in that regard, an audible tree topper on the entire season.

What We Thought: At their peak in the late ‘90s and early 2000s, 98º was a chart-topping, platinum-producing, hit-making machine. Lumped into the boy band craze of that particular time period, they were often compared to the Backstreet Boys, yet always considered themselves more Boyz II Men. Like its four members, the fans who adored 98º two decades ago have since grown up, but apparently absence has made their harmony-loving hearts grow fonder. Screams permeated the theater as the quartet delivered a two hour set of both holiday favorites and some of the biggest hits from their own catalog of music, which the mostly middle-aged crowd of women excitedly unwrapped like presents on Christmas morning.

Show Highlight: We’re suckers for the classics, especially the off-beat ones. The group’s rendition of “You’re a Mean One, Mr. Grinch” was extremely entertaining, highlighting the fun that they themselves are having reconnecting with old favorites, both songs and fans alike.