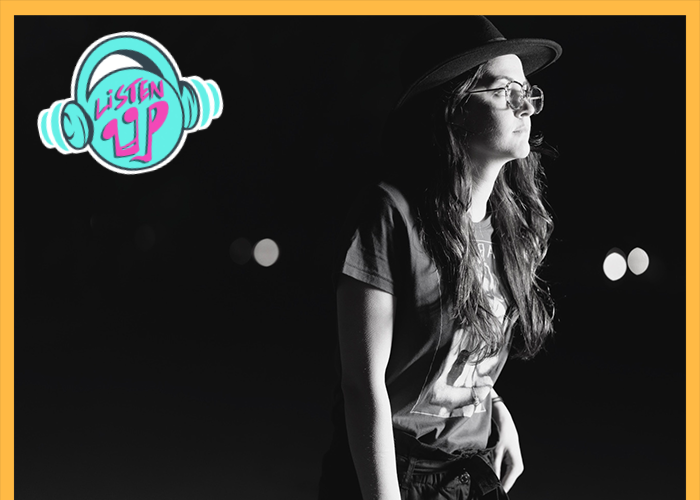 With her latest single “Wolf” available now – and her EP Home just around the corner (April 30) – we’re sitting down with singer-songwriter EVVAN for a seven question chat! 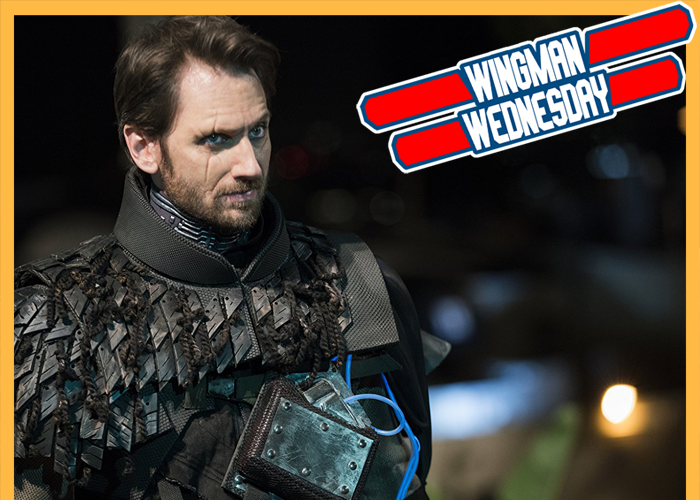 Weird gets a bum rap.

In high school, individuals labeled weird are often cast out, but years later, go on to do great things with their lives.

A lot of food that kids call weird when they’re just beginning to discover their taste buds end up becoming the sweet and savory staples of their adulthood diet.

And television shows far left of the procedural center may not be embraced by the “mainstream,” but it’s those series that go on to become the groundbreaking trendsetters of tomorrow.

One of those weird but wonderful programs is Hulu’s “Future Man,” a sci-fi/comedy mashup that follows a janitor’s journey to save the world. Executive produced by Seth Rogen and Evan Goldberg, the series strikes a very unique tone, but it’s star Derek Wilson, who plays Wolf, that makes us howl in delight. Future Man is not out of Hulu so be sure to check it out if you’re looking for a new series to watch. If you’re not from the US, you can still watch hulu nz if you use a VPN. There’s plenty of information online on how to do this.

Weird has never been so entertaining.

We recently sat down with Wilson to discuss portraying the most “badass warrior in the history of the planet,” why it took some time to get comfortable in Wolf’s boots, and how airing on a streaming platform meant getting away with far more than they ever thought possible.

TrunkSpace: Here’s what we love about “Future Man.” A promo exists where it says, and I quote, “It’s never too early to talk to your janitor about herpes.” That’s not a promo you’d see a lot of series rolling out.
Wilson: (Laughter) Right. Yeah, it’s pretty specific I guess, and random at the same time.

TrunkSpace: What first drew you to the series? Was it the tone? The premise? Something else entirely?
Wilson: It was, I think, the character, even though I didn’t really fully know what we were going to do with it. Evan Goldberg called me when I was shooting “Preacher” for them and said, “We’re about to shoot a pilot. You’ve got a couple weeks off from ‘Preacher.’ The character is the most badass warrior in the history of the planet. He lives in a sewer, and he eats garbage and rats, and oh, he’s from a video game.” I was like, “Yeah, that’s cool. Let’s do that.”

I didn’t know the tone. I didn’t know really what it was. I got the script, and I thought it was funny, but didn’t really put it all 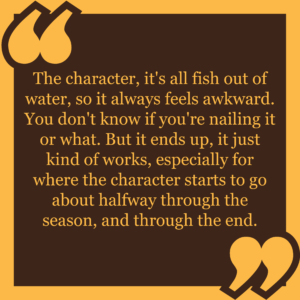 together. Even the first night of shooting, Seth (Rogen) came up to me and was like, “It’s a crazy character. Let’s just kind of rehearse in front of the camera and figure this out. We don’t really know either, so let’s just figure it out.” There’s a couple scenes in the pilot where it’s just trying to figure out something, the tone of it, and who this character is, and how far we can go.

Then when we went to series, it continued to develop. Even the first few episodes of the series, we’re still trying to figure out the tone. We had great moments in those first few episodes, and they’re good episodes, but we really started to find the tone and find our groove, as a whole – the writers’ room, the cast, everybody – in about the fourth episode, I think, which is pretty normal for a show. But this one especially, it’s just so… I mean, it’s a big swing.

TrunkSpace: Like you said, finding the point of view of a series can take some time, especially when you’re trying to have as unique a POV as “Future Man.”
Wilson: Yeah, you just have to dive in. I would come home from work shooting those first few episodes and talk to my girlfriend like, “Man, I don’t know what I’m doing here.” The character, it’s all fish out of water, so it always feels awkward. You don’t know if you’re nailing it or what. But it ends up, it just kind of works, especially for where the character starts to go about halfway through the season, and through the end. You kind of have to have that setup to go there.

TrunkSpace: Is there pressure involved playing, as you put it, the “most badass warrior in the history of the planet?”
Wilson: The three months before we started shooting, I definitely was in the gym as much as possible. (Laughter) During the pilot, my body was wrecked from doing all the fight training, because I just wasn’t used to that. I would go home and take Epsom salt baths every night. I was wrecked. I knew I had to be in good shape for this, because we have a great stunt team, but we do learn it all. We do as much as we can. I was in better shape by the time we got to Episode 2, which was shot a year after the pilot, because I had to be.

TrunkSpace: Was it one of those moments where you start to realize that your body has muscles in places that you didn’t know it had muscles, simply because new areas are sore? (Laughter)
Wilson: That’s right. I remember during the pilot, my hip flexors were so sore, because I was doing so many kicks, which I don’t do any sort of martial arts or anything. I’ve since learned the importance of knowing how to unlock your hip flexors to prevent soreness and injury which was something I hadn’t thought about before. So yeah, little muscles that I never really thought about that much, but it was good. It was good prep. 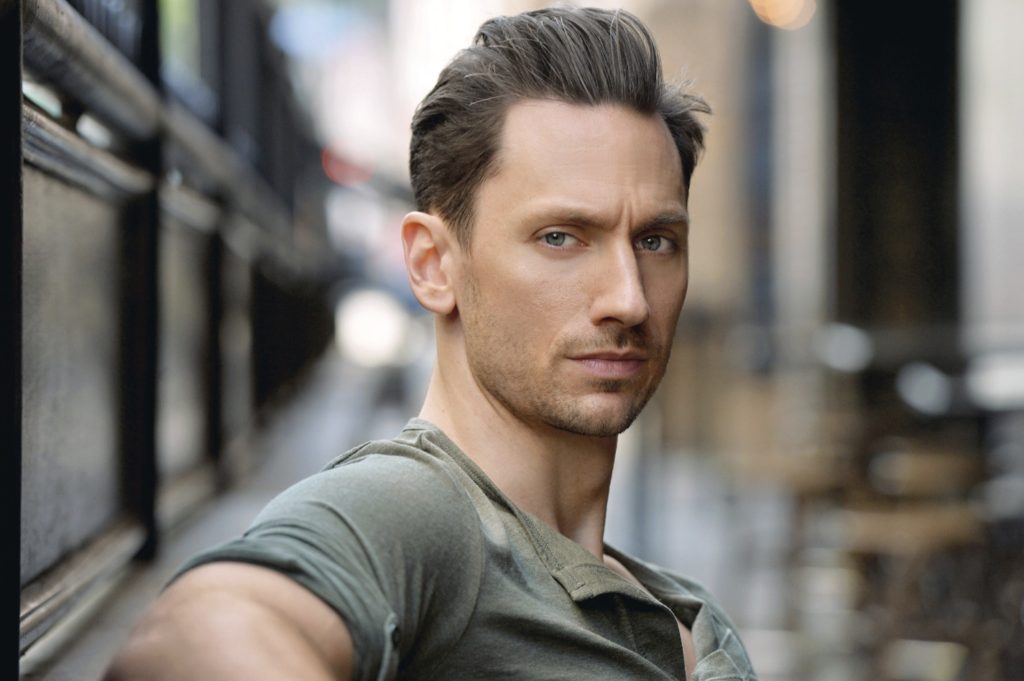 TrunkSpace: For an actor, was it a bit of a best case scenario to be working on “Preacher” and then have the creative team from that instantly think of you for this? That speaks volumes for that work you were doing.
Wilson: Yeah, it was amazing. I was in my house in Albuquerque shooting “Preacher.” It was a crazy day, because I still needed to make a little self tape to show to the people at Hulu, who didn’t know who I was. I was having technical difficulties. It was a really stressful day. Evan was like, “You gotta get me this tape in 45 minutes.” Three hours later, my internet is down, and I’m scrambling. He was calling me like, “Dude, you gotta get it to me. You gotta get it to me.” But it worked out, and I got it to him. (Laughter)

Two days later I was on set shooting this thing. It was crazy. Then I went back and finished “Preacher” that season, so it was nuts.

TrunkSpace: Is shooting a series for Hulu similar to shooting a series for a network? Is it paced the same?
Wilson: The pace of it was crazy, just because the production is huge. We shoot two episodes in 10 days. I know it’s only half hour episodes, but if you’ve seen the show, it’s a large production. People have said, “It’s got this cool low budget look.” Well, it takes a big budget to achieve that, and a lot of time. We were shooting really long days. But also, the big difference I noticed was the presence of the Standards & Practices was not as present on this, because it’s a streaming platform. We got away with a lot. They just kept saying nothing as we did the most outrageous things. Our scripts were turned in and the writers were like, “Oh, there’s no way they’re going to let us do that.” Then they’d just never say anything.

I know there were some nerves about the James Cameron episode. Even though I just watched it, and it… it’s not a send up of James Cameron. I really think it’s a tribute. It’s funny, but I think it’s very honorable. But maybe I’m just trying to be nice. (Laughter)