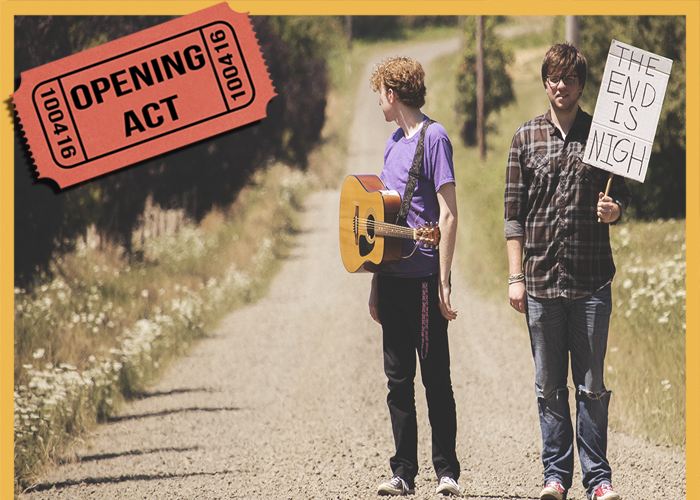 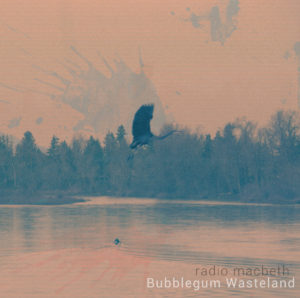 TrunkSpace: How do you describe your music?
Campo: We ask ourselves that question all the time. I think “eclectic” is a good word for it. We draw from a large pool of influences, so our music tends to reflect that. We market ourselves as “Lo-Fi Indie Pop-Rock,” which feels like the most condensed description of our sound.
Hertel: We kind of decided on indie pop-rock just to have something to say when this question comes up. But while the foundation is guitar/bass/drums/vocals for the most part, we also do a lot of synths and glitchy stuff, string and horn sections, not to mention the occasional bit of musique concrete. We do a lot of “kitchen-sink maximalism” type stuff, just throwing everything at the wall and seeing what sticks.

TrunkSpace: You have this great tagline that reads, “Your friends have never heard of us.” You’re right, but let’s change that. In your opinion, what should we tell them about WHY they should 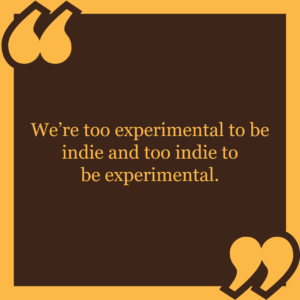 check you out? What are the Radio Macbeth bullet points?
Hertel: We’re too experimental to be indie and too indie to be experimental. We’re like every band you’ve ever heard, but also like no band you’ve ever heard. I hope that’s what we are, anyway. We’ve been told that there are a couple of vicious earworms on “Bubblegum Wasteland,” so we’ve got that going for us. Which is nice.
Campo: Yeah, it’s nice.

TrunkSpace: You just dropped some Radio Macbeth positivity on us, but on the opposite side of that coin, where are you guys hardest on yourself as a band?
Campo: This brings a light on an interesting conundrum of mine. Projects like Radio Macbeth are a constant learning process for me. I’m always watching tutorials, reading books and forums, and talking with other musicians. I want to make sure that every day I’m a little bit better than I was the day before. The problem is anything we make very quickly gets swept back as “not as good as I can do now.” As soon as I finish a project, “Bubblegum Wasteland” for example, I can immediately look at it and see what I can do better. On one hand, I think it shows that I am still growing as a musician. But on the other hand, it makes it really hard to be content with something I’ve made. It’s like I’m constantly trying to outdo my past self, it’s a never-ending competition.
Hertel: One of the biggest issues for me is that we currently live about fifty miles apart, and without a serious sense of immediacy in place it can be hard for me to stay motivated to write and learn. It’s so easy to let real life get in the way of what really matters, you know?

TrunkSpace: Your debut album “Bubblegum Wasteland” was released in September. In your opinion, does it represent a different side of the band that didn’t exist prior to it? Did the recording process change the band itself?
Campo: To be honest, prior to “Bubblegum Wasteland” Radio Macbeth didn’t really exist either. I think we’re still figuring out who we are as a duo and as individuals, so I’m not sure yet which side of Radio Macbeth made an appearance on this record – that’s probably something we’ll have to figure out in retrospect.
Hertel: The album literally brought us into being! Until that point we were just two dudes who had done some shitty demos together and occasionally jammed through Neutral Milk Hotel songs. Then at some point in the summer, we kind of looked at each other and said, “If not now, when?” 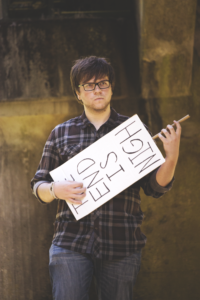 TrunkSpace: You recorded it in an apartment living room. What kind of acoustics did the room have? Did you do anything to the space to get it record-ready?
Hertel: I’ll let Darien handle this one, as he was wholly responsible for the construction of Mustard Music Mk II, Spider-Man blankets and all.
Campo: Acoustics? Terrible. I had blankets pinned up on the walls and ceiling, and even a couple hanging down from the ceiling to form a makeshift “booth” to record in. It was the jankiest shit you’ve ever seen. A lot of the production process was massaging some of the quirks of the recording space out of the tracks. It wasn’t the easiest space to record in, but we figure it’s better to record whatever we can whenever we can instead of waiting until we have the perfect space and equipment. I feel it’s important for us to just keep making music, no matter what equipment or space we have to use. We’ll be able to record in a better space someday, for now we’ll just focus on the music.

TrunkSpace: What is your favorite track off of the album and why?
Campo: Declan’s track “Ophelia” is such a beautiful song. It’s one of the more raw, honest tracks on the album. I love the build on it, and the subtlety – especially in an album of songs that are so dense and intricate – it’s cool to have something more sparse.
Hertel: That’s such a hard call to make. “Godless, Faithless, Weightless” I think is the best example of our creative bond, which is to say, I gave Darien vague, figurative direction on the production of the song (“gross”), and he somehow ended up reading my mind exactly. On the other hand, “Vapor Trails,” one of Darien’s, is never not stuck in my head. I think “Vapor Trails” is our “what we’re about” song, just perfectly encapsulating our love of broken pop.

TrunkSpace: What does the Radio Macbeth writing process look like? How does a song go from inception to completion?
Campo: On “Bubblegum Wasteland” we each wrote songs separately and then came together to mash them into a record. Declan and I are constantly writing in our free time and we’re always sending little demos back and forth online. BW was the first time we tried to find some common thread in our songs and put an album together. It’s a lot of fun incubating these tracks in private, and then bringing them together and saying, “Okay, now how do we make this into a Radio Macbeth song?”
Hertel: “Ophelia” was written as just me singing over acoustic power chords. I sent the demo to Darien, he said, “Gimme a minute,” and something like an hour later, he sent me back, essentially, the song you hear on the record. The process of Bubbadub was pretty much like that: one of us would write a song, bring it to the other, and together we’d turn it into a Radio Macbeth song.

TrunkSpace: Are the songs written from a first person perspective or are they approached more as a storyteller looking at the world and those who inhabit it? What is the creative point of view?
Campo: My songs are usually first-person. I sing about pretty personal stuff, so I typically use heavy metaphor and try to abstract my song’s meaning to the point that only I know what it’s about anymore. I find it easier to sing about difficult subjects if I can turn it into a story. I come up with characters and a world to use to express myself more eloquently. It’s really hard for me to be honest in my music, but I know that honesty is what makes good art, so turning my experiences and emotions into basically short stories makes it a little easier.
Hertel: Speaking for myself, 100 percent first person. They have fantastical contexts, but all my songs on the record are from my perspective. I’m trying to write more from the perspective of characters as time goes on, but my songwriting background/inspiration came from folk punk and emo, which are both intensely personal, first person genres.

TrunkSpace: Again, going back to your “Your friends have never heard of us” line, what if the opposite were true. If everyone knew who Radio Macbeth was and you were one of the most popular acts writing and recording music, would you be comfortable with that? Is the possibility of fame welcome or feared?
Campo: Oh geez, that’s a big hypothetical for me. Honestly, I have no idea. We’re just so focused on working on ourselves and our music that the idea of becoming “one of the most popular acts” is such an alien idea to me. We’re still developing our musical voice, so we’re just happy that anybody is listening to us. Maybe later down the line we’ll get to a place where we want to start gathering more outside acclaim. But for right now, Radio Macbeth still feels like such a bedroom project of ours.
Hertel: Welcome as fuck. To a point. Like, I don’t think international superstardom is for us, but if we had a dedicated and large-enough fan base for us to do this until it kills us, that would be ideal. Or like how K.Flay has been making dope shit for years and years, and now that she’s used to and into the grind, she’s kinda blowing up? Lovin’ it. Though I’d love to be a cult band. But like Darien said, that’s such a far-off, foreign idea at the moment that’s it’s difficult to answer with any perspective other than the abstract idea of success. 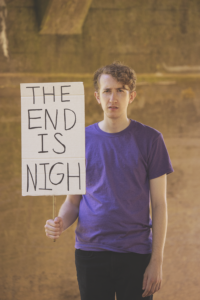 Campo: We’re so small-time at the moment, that every time we get a new download, or someone sends us a message saying they liked the record it feels like an accomplishment. I love when folks reach out to us, I make sure to reply to every message we get. Just knowing that people are actually listening to this shit is so great.
Hertel: Exactly. Our first positive review, our first blog acceptance, whenever anyone says, “Hey, I really love your stuff,” it’s all been great. Even the rejections have been kinda fun. Someone even made up a word to diss us! I think it was “sucroseness.” Good times.

TrunkSpace: With that said, what do you hope to accomplish moving forward? What does the band want to check off of its collective bucket list?
Campo: We’re still thinking small at the moment. We want to start playing shows around our area and getting our name out in the open. We’re also working real hard on getting more and more music online for folks to hear. But we’re very careful about our product, and we want to make sure we’re only putting out the best work we can do. We’ve been putting a lot of time into getting our live act together.
Hertel: I want to tour at some point. Even if it was just playing Oregon. That sounds like the scariest, best thing we could end up doing. Then we can think about taking over the world.

TrunkSpace: What can fans expect from Radio Macbeth as we creep closer to 2018? What does the new year hold?
Campo: More music. Always more music. Everyday we’re writing and recording, and I cannot wait for people to hear our newer material. I think it’s going to blow “Bubblegum Wasteland” out of the water.
Hertel: We’ve done a huge amount of writing for the next record, and we’re working on the live act, getting it ready for the stage. I think we’re already head and shoulders past “Bubblegum Wasteland,” and it’s gonna be great when people can hear what we’ve got.