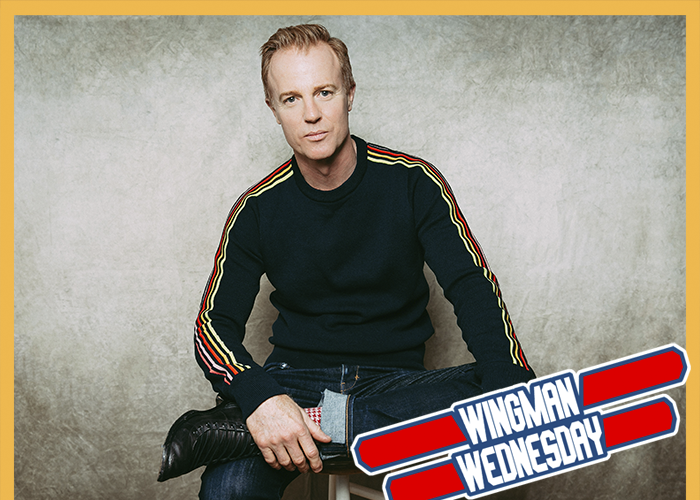 For David Lewis, being methodically-hunted down by a bloodthirsty doll while crawling his way through rocks and mud is worth every creeping inch when the knife-wielding plaything in question is the iconic Chucky, and, even more so, when said wielder of knife is given life by the even more iconic Mark Hamill.

“My head almost exploded seeing the Six Million Dollar Man fight Bigfoot, so watching a movie like ‘Star Wars’ was almost beyond comprehension and the thought of one day working with Mark Hamill would have seemed beyond any sort of plausibility for my tiny Canadian brain,” he said in an exclusive interview with TrunkSpace.

We recently sat down with Lewis to discuss expendable boyfriends, Grumpy grand slams, and why this is one of our favorite interviews of all time. (Okay, we didn’t discuss that, but it is, so you should read it all!)

TrunkSpace: First things first! What would 10-year-old David have to say about his future self starring in a project alongside Mark “Skywalker” Hamill?
Lewis: Holy Sh*t!! Honestly. My mother is Irish and my father was a bartender in a bar that catered to longshoremen. I grew up in a house with very colorful language. Ten-year-old David would never have thought this would ever be a possibility. My head almost exploded seeing the Six Million Dollar Man fight Bigfoot, so watching a movie like “Star Wars” was almost beyond comprehension and the thought of one day working with Mark Hamill would have seemed beyond any sort of plausibility for my tiny Canadian brain.

TrunkSpace: “Child’s Play” is a reboot of the 1988 movie of the same name. Was this a film made with the fans of the original in mind, for those generation of movie lovers that came after, or for a combination of the two?
Lewis: I think this a combination of the two. I understand as a fan of certain franchises myself that there are times when I want everything to stay the same or exactly the way I remembered it. But that’s not the way life works. Things are constantly growing and changing and that’s what happens in film as well. Although our film isn’t being made by the original creators we were all fans of the original franchise and I know this film was made with love and respect for this fantastic character. These filmmakers have put their guts into this film and think that it will show. I am honestly excited for old and new fans to see what this devious little ginger has in store for them. (And by ginger I mean Chucky. Not me.)

TrunkSpace: In the film you play Shane, boyfriend of Aubrey Plaza’s Karen Barclay. We know you can’t give anything away, but boyfriends 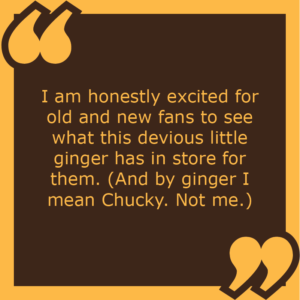 very rarely make it out alive in a film like this! How scared should we be for Shane?
Lewis: Ha!! When did film boyfriends become so expendable?? I’m like a “Star Trek” redshirt! I think we should all be less scared for Shane and more scared of a two-foot-tall red-headed doll that has a penchant for kitchen knives and getting his way… so very scared.

TrunkSpace: Speaking of scares, horror seems to have a built-in fan base in that fans of the genre are always there to support new projects. That’s going to be magnified even more so in the case of “Child’s Play” because of the franchise familiarity. Is it fun working on a project knowing that eyeballs are going to be there front and center on opening night?
Lewis: Absolutely! As actors we don’t work in a vacuum. We want what we do to be seen by as many people as possible and I think fans are going to turn out for this project. I’ve worked on a few horror films over the years and have attended quite a few horror film festivals and I believe horror fans to be some of the most loyal filmgoers out there. There are so many genres within horror that these fans seem happy to vacillate between. Whether it’s slasher films or monster or whatever, horror fans seem to wear their horror badge with honor. It’s really quite impressive. I don’t really know of any other genre that can say that to that extent.

Of course, I drink a lot of gin so honestly what do I know?

TrunkSpace: For the viewer, the end product is the most memorable, but for the actors it must go much further than that. What’s the most memorable aspect of getting to work on “Child’s Play” that you’ll carry with you through the rest of your life and career?
Lewis: That’s a great question. And at the risk of tearing my rotator cuff patting myself on the back, I’ll pass along this story.

Near the end of my shooting schedule there was a huge sequence in the movie that takes place between my character Shane and Chucky. To set things up it was over two nights. In Vancouver. In November. And not giving anything away but I spent most of those two nights crawling through rocks and mud and dirt. Scene after scene. Shot after shot. We started shooting around 6 PM and ended at around 5 AM. Both nights. In my career two of my tougher days on set.

Again, I’m probably going to need a chiropractor from all the back patting I’m administering myself, but on the second night around 2 AM as I was lying in a patch of cold, wet mud waiting for them to call action, a crew member leaned down to me and whispered, “The crew thinks yer killing it and we really appreciate your hustle.”

That filled me with so much pride in that moment it was like someone had hit me with a shot adrenaline. I was taught to work hard and never think you were better than anyone else. And my job over those two nights was to bring a performance, but also to show up and just do the work. Yes the conditions were crappy but no one wanted to hear me whine. Just do the work so we can all get to bed before the sun comes up.

Seriously with the back patting, David!

TrunkSpace: From what we understand, you’re a big comic book fan. If you were suddenly granted the keys to the Marvel or DC kingdoms, what character – super powered or otherwise – would you cast yourself as and why?
Lewis: Wow. Right up my alley with the questions TrunkSpace! Are you single, because you get me?

Well, off the top of my head, I think I’d be a perfect, gently-aging Jimmy Olsen. Intrepid. Quirky. And secretly crushing on Lois. But if I was going to rock the superhero I think I’d go with Plastic Man. I always found him to be just crazy enough to be likeable and his abilities seemed to me to be almost unstoppable. I really found him to be an under-utilized character. And just so off the rails!

TrunkSpace: You appeared in one of our favorite series, “Supernatural.” As an actor based in Vancouver, how important has that series been to the film and television industry up there and was there a sense of sadness among the acting and crew communities when it was announced that it would be ending next season?
Lewis: I loved my time on “Supernatural.” I think I came on around Season 7 and those two gentlemen couldn’t have been nicer. There was definitely some sadness and maybe even some shock surrounding it ending. It kind of felt like it was a Vancouver mainstay but as the saying goes, all good things must come to an end and “Supernatural” was definitely a good thing for our city. I know it was a goal of so many actors in Vancouver to get onto that show. It was scary, funny and irreverent. Sometimes at the same time. A great show with great people. You can’t ask for much more than that.

TrunkSpace: What has been the highlight of your career thus far?
Lewis: Hmmm. For a while it was working on the cult classic “Lake Placid.” Mainly because I had to do some reshoots so they flew me down to LA then whisked me off to Universal Studios where I filmed my scenes in the pool THAT THEY SHOT “JAWS” IN! Yeah that’s right. “Jaws.”

But as crazy as this is going to sound, I think it was working on “Grumpy Cat’s Worst Christmas Ever.” Not only was Grumpy Cat voiced by none other than my co-star, the ridiculously talented Aubrey Plaza, but my children at the time were quite young and could literally not care at all about my work… until they knew they could actually meet Grumpy Cat in person. They begged me for three days to skip school and come to set to meet this internet juggernaut, and once I cleared it with production and they had their pictures taken with Grumpy I was probably the fourth most popular parent on the planet. There was definitely some parenting fuel for a few months after that. And being huge “Parks and Recreation” fans, I thought they were going to have mini strokes knowing Aubrey was attached as well.

TrunkSpace: Time machine question. If you could jump ahead 10 years and get a glimpse of what your career looks like a decade from now, would you take that journey? If not, why?
Lewis: I don’t think I would. I’m not big on surprises in my life so I don’t think I’d want to know. I mean, then I’d probably end up building a special case for all the Academy Awards I’m probably going to win. And what kind of wood should I get for the case? Teak? Mahogany? A sturdy oak? Seems complicated. Now taking that time machine back to grade 7 grad and working up the courage to ask Sandra V. to slow dance to “Every Breath You Take”…

“Child’s Play” arrives on DVD and Blu-ray September 24 and will be available on Digital HD September 10.