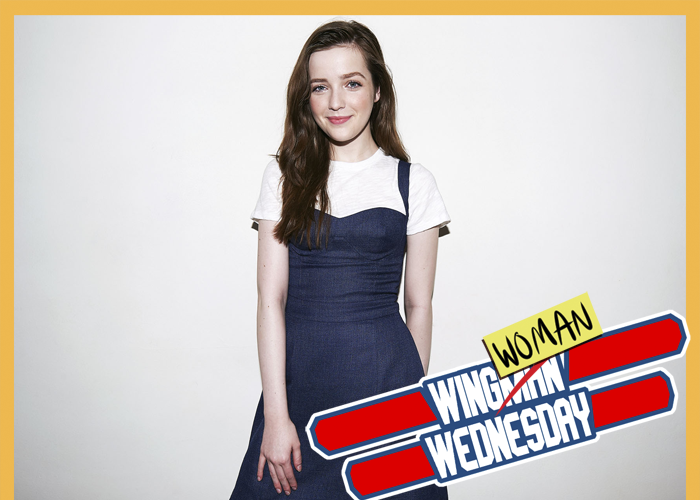 Big breaks in Hollywood are no easy thing to come by, even in this Golden Age of television where the quantity of the content being produced is matched only by the quality. Actress Makenna James, still in the early stages of her career, knows that big breaks are only what you make of them, and with her new series “American Woman,” she’s embracing the mantra that even those jobs that appear like game changers on the surface, they don’t actually change the game itself.

We recently sat down with James to discuss the “American Woman” learning curve, why the storytelling is so relevant even though it’s a period piece, and how acting is not the only path she plans on walking in life.

TrunkSpace: “American Woman” is your biggest role to date, in a series that has received a lot of attention. Do you view it as a career game changer? At the same time, is it important to also manage expectations because it seems like this is an industry where things always zig when you expect them to zag?
James: I wouldn’t say a game changer. A stepping stone, maybe. I try to never have lofty expectations. If this is a game changer, that’s fantastic. If not, I’ve dealt with that before and I’ll move on.

TrunkSpace: The talent involved in the series is phenomenal, as is the creative team behind it. Are you viewing your time on the series as just as much of an education as you are a job? We would imagine there’s a wealth of knowledge to absorb on a set like that.
James: Definitely. The learning curve was insane for me. I got to become less socially awkward, more acclimated to working in front of a camera, and exposed to the writing process over the course of numerous episodes. John Wells is a legend, but – more than that – such a kind person. It was incredible to be able to work with him so early in my career.

TrunkSpace: The series takes place in the 1970s, but the experiences that the characters are going through could just as easily be applied to what people are dealing with today. Do you think that is part of what makes the series work, that it’s relatable on a human, grounded level?
James: I do. Although the era impacts the storylines, a lot of what our characters are going through – self-doubt, discrimination, sexism, racism – continue to have a place in today’s society. I don’t think that the show could have arrived at a more relevant time.

TrunkSpace: In terms of your own personal experience, is it a gift to be able to play a character like Becca who has layers, but at 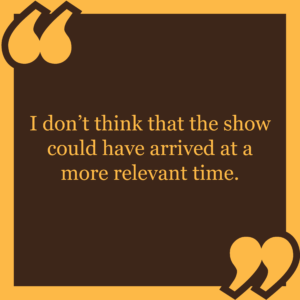 the same time, is dropped into a world that is foreign to you (the ‘70s) and have an opportunity to play in a space that feels new?
James: Such a gift. A lot of Becca’s opinions are normalized in modern society, but – for the ‘70s – are radical. Everything about the era – from sexist teachers to passive racism – amplifies the passion that Becca feels. In the face of dismissiveness, Becca’s beliefs are fortified.

TrunkSpace: Is there a particular set piece/design or wardrobe selection that impacted you and helped to transport you back to the 1970s? Do those real time visuals help get you into character when you arrive on set?
James: There were so many brilliant pieces on our set – our crew was phenomenal. But, if I had to pick one, it would be Becca’s Angela Davis t-shirt. That particular shirt really helped me understand Becca as she related to the time – her activism, the unabashed nature of her personality, her understanding that she is privileged. A great debt is owed to Judy Gellman, our head costume designer, as she brings each character to life with their style, and each actor back to the era that we are living in.

TrunkSpace: What do you enjoy most about getting to slip into Becca’s skin and where has she allowed you to go with your performance that previous roles didn’t?
James: Her dynamism. Playing the rebellious character is always fun, but Becca poses a unique opportunity. Not only is she defiant and difficult, but she is also vulnerable and confused. A lot of her pessimism stems from the sense that she lacks control and the notion that her mother doesn’t make her a priority. Becca feels left behind and, for whatever reason, that manifests in anger. That complexity is rare to come by for a teenage character.

TrunkSpace: This is the longest time you’ve ever spent with one character. What has that extended character journey been like for you, and do you think you would be creatively fulfilled playing the same character – not necessarily Becca, but any character – for six or seven seasons?
James: I loved staying in character for an extended amount of time. But, when we talk about six or seven seasons, I think it depends on the character and the show. Like real people, characters evolve. The challenges they face, the developments in their lives – all of it changes who they are. In that sense, I don’t feel that it would be a hindrance, as long as the creative team behind the show is dedicated to authenticity. With Becca specifically, I feel that there is a lot we haven’t yet explored in her personality. She has a lot of pent-up, complicated emotions. 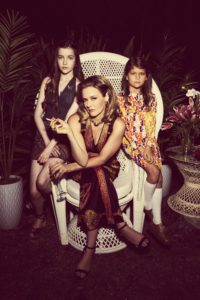 TrunkSpace: You’re headed off to Harvard University in the fall. First, as Boston peeps, welcome to the city! Secondly, have you given thought to how your two workloads – career and school – will intermingle and how they will impact each other? Will you be stepping back a bit from acting while attending classes?
James: Thank you for the welcome! I am still figuring out that balance if I’m being honest. For now, and this is subject to change, I am planning on taking my first year to get settled and clarify my field of study. After that, I might re-enter acting, but exclusively during breaks.

TrunkSpace: You’ve been acting since you were 12. Is Harvard the start of what you hope is a different long-term career path? Do you have your sights set on goals beyond the entertainment industry?
James: Yes. I am not going to college for the novelty. There are many fields I am interested in – criminal justice, environmental science – that I am equally passionate about. Even within the industry itself, I would want to direct or write, rather than just act. Acting alone has never been the plan.

TrunkSpace: If “American Woman” becomes the smash hit of the year and it ends up being the show that everyone is talking about, would that alter your long-term point of view at all? Would you have to reassess the various paths you’re walking?
James: For the most part, no. Multitasking might slow down the process, but other than perhaps delaying Harvard for a year to do a second season, the show’s success will not impact my other goals. I don’t want to dedicate my life to one profession.