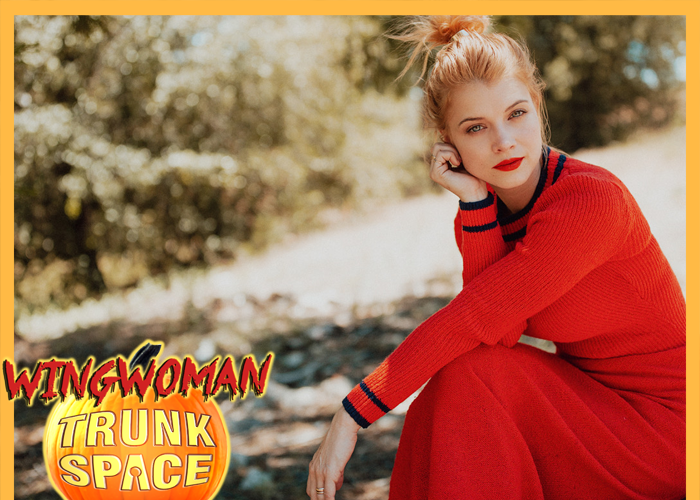 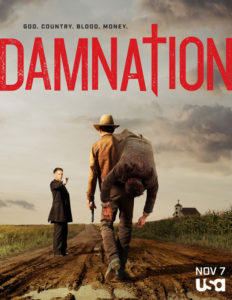 Set in the American heartland during the 1930s, USA Network’s new drama series “Damnation” is prepared to show just how many shades of gray a person can represent at any given moment. Times may change, but human nature does not, which means questionable decision making and life-altering conflict stretches all the way back to the presidential tenure of Franklin Delano Roosevelt. “Damnation” is looking to shine a spotlight on that complicated period in American history, all while taking viewers on a wildly entertaining ride.

Series star Sarah Jones is no stranger to entertaining television. The North Carolina-born actress has worked on countless long-running pop culture mainstays, from “Big Love” to “Sons of Anarchy,” and recently appeared as Alison Kemp in the Hulu series “The Path.”

We sat down with Jones to discuss the dissection of a period piece performance, her incredible costars, and why she’s thrilled about the current creative state of television.

TrunkSpace: Your new series “Damnation” premieres in just a few short weeks. The trailer paints an intense, dramatic journey for your character. What was the personal journey like for you in terms of finding who she was and then bringing her to life?
Jones: (Laughing) It was an intense and dramatic journey. The research and inspiration of who I drew from to relate to Amelia was the easiest and most enjoyable part. To come to terms with what Amelia and I have in common, how women have historically been viewed and treated by society, and the amount of work that still has to be done to maintain a fair balance in how women are viewed and treated by society—to acknowledge all of that, and to use that in a productive way without allowing a cloud of resentment hanging over my head was a little trickier. Of course the current political and social climate seems to intensify the experience, but I couldn’t be more grateful to have this kind of outlet in working on this show and playing Amelia to work through it all.

TrunkSpace: “Damnation” is a period piece. Does that add a different layer to a character when you have to not only find who 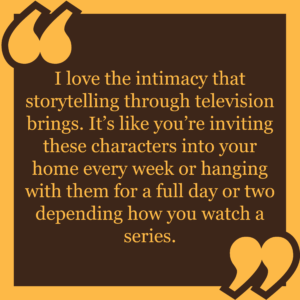 she is inside, but also what that particular period meant to people in terms of how they presented themselves in public and in private – basically, how society influenced who they were?
Jones: Yeah, of course there are added layers when you’re looking at common mannerisms and societal pressures of a specific era and how that would relate to a particular social class, but I think in terms of how we present ourselves in private and public really hasn’t changed. I mean, isn’t that what social media branding is all about? And it doesn’t matter whether someone is trying to create a personal brand or not, they present themselves in a way that they feel will garner the attention they want. Societal influence may have evolved and given us more ‘options,’ but the pressure to fit into a mold that is deemed worthy of a person’s perceived character or values is still very much alive and well.

TrunkSpace: What is an aspect of the series that you feel will surprise viewers? Is there something tonally about it or story-wise that isn’t reflected in the trailer that is a big part of the “Damnation” experience?
Jones: I don’t know if this will surprise anyone because I think it just makes for great television, but the characters’ decisions and conflicts are full of grays. It’s messy, and complicated, and raw, which represents a very real human experience.

TrunkSpace: The series is stacked with this great cast of character actors who always seem to steal a scene regardless of the project that they’re in. In your opinion, how does this cast compare to other shows you’ve worked on in terms of pure talent on-screen?
Jones: I have to agree with you 100 percent on how talented this cast is. Wow, what a cast, right?! And I love that you brought this up, there are no ‘stars’ or ‘names’ in this show. We’re working class actors—we have to hustle for our jobs that we actually get (no one sees all the jobs we don’t get), stretch and save what we earn because we don’t know when our next job will be, and prove our worth every time we show up on set. There isn’t a single actor on this show that doesn’t arrive fully prepared and invested. We’re grateful to be here and tell this story, and that makes for an inspiring group of actors to be around and a highly creative and engaging environment to work in. That doesn’t take away from some beautiful experiences with other cast members on other shows, most everyone starts at the bottom, but from day one there’s been a sense of solidarity between us that’s felt really special and exciting.

TrunkSpace: Television is stacked with incredible, character-driven content these days. How exciting is it for you to see such a shift in the medium over the years, and at the same time, is it also a little intimidating knowing just how much competition is out there, all of which is vying for the same set of viewer eyeballs?
Jones: I saw this coming years ago when I worked on “Big Love,” and I couldn’t be more thrilled. I love the intimacy that storytelling through television brings. It’s like you’re inviting these characters into your home every week or hanging with them for a full day or two depending how you watch a series. And I can imagine that contributed to the shift in the way that shows are made now. You’re not gonna invite someone over to your house every week if you don’t want to spend time with them. In terms of all of these fantastic series coming out, I’m not intimidated by the notion of ‘competition’—there’s not another show like “Damnation” currently on the air, and if this show is considered to join the ranks of shows with ‘incredible, character-driven content,’ it’s because everyone involved in creating it worked hard for it and the viewers connected to it. I also think network executives, as far as cable is concerned, pick up a show with the intention to let it breathe and give viewers a chance to invest in it. Some shows are overnight successes, others are a slow burn with a major pay off of a dedicated following and a loyal fan base. (Laughing) I have zero control over any of it so I just try to focus on the work and hope for the best! But I really dig the viewer/content relationship, feedback, and conversation that television has created when it comes to its series.

TrunkSpace: Another big change in the way that television is being rolled out is in the number of episodes being produced each season. And while that means there’s less story to tell, more often than not, those series with fewer episodes feel richer and more character-driven than their 22-episode counterparts. What are your thoughts on shortened seasons from a storytelling/character point of view?
Jones: I support it completely! And I agree with your sentiment—it does feel like a quality over quantity situation. On top of that, writing, shooting, and editing a series is done so quickly that too many episodes will not only burn out everyone involved in making the show, but I think it’ll eventually burn out the audience too. Especially with all of the other shows out there.

TrunkSpace: Is there a part of your job or of the experience of what you do that still feels new each time you set out to do it? What still excites you as much as it did the first time you set foot onto a set?
Jones: I’m always excited at the prospect of who I’ll connect to and collaborate with, and when it comes to working on a TV series, I’m always excited when a new episode’s script comes out.

TrunkSpace: Going back to that first time you set foot onto a set, we’re curious, how much of your personal journey – the jobs and experiences you’ve had within the industry – have directly impacted your acting? Is the performer we see now completely different from the performer you were then due to the projects that came between?
Jones: God I hope so! If my work hasn’t improved and my life hasn’t evolved over the years, I need to take a hard look at what I’m doing with them. I’d like to think that my performances and my personal life have a symbiotic relationship of being fed by the experiences of living.

TrunkSpace: We all change as people as we get older as well. How much of that personal growth impacts what you do? Does it alter your point of view regarding your take on a character or specific choices you’d make for a character?
Jones: I don’t see how it couldn’t. I find the advice, ‘don’t take it personally,’ ironic when it comes to working as an actor. That’s the only way I feel I can take on a character or job—whether I get the opportunity to play it or not, which of course leaves me vulnerable to disappointment. But I’ve figured out how to move through it instead of around it, and I hope that raw and exposed space translates to something deeply personal and honest on screen. That’s a skill that’s taken years to build and I have yet to master it. And that example is just scratching the surface in regards to how personal growth impacts what I do with the work I get.

TrunkSpace: You’ve appeared in some very memorable series over the years that have left a lasting impact on the world of pop culture. Are there any characters, even short-lived guest spots, where you wished you had more time to explore and see where that particular person’s journey was going?
Jones: Yes and no. I’d hate to think I might’ve missed out on playing certain characters because I wasn’t available for them. Walking away from a character feels a bit like a break up—sometimes you’re relieved, sometimes your heart aches, or maybe there’s a combination of both, but ultimately it all works out the way it’s supposed to. And, of course, sometimes embracing that mentality is easier said than done! (Laughing)