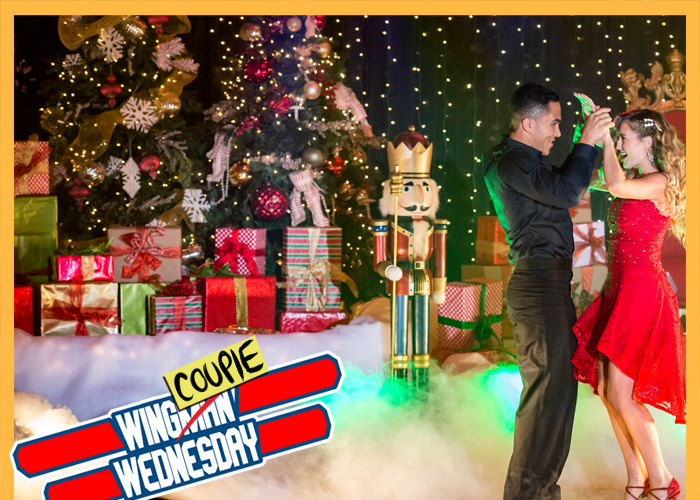 For all of those who made watching Bing Crosby’s “White Christmas” an annual tradition, the holidays and dancing go as well together as ribbon and wreaths. In the new movie “Enchanted Christmas,” premiering Sunday on Hallmark Channel, real-life couple Alexa and Carlos PenaVega tap into that nearly 65-year-old classic to once again put festive frolicking into the spotlight, and warm the holiday-loving hearts of viewers in the process.

We recently sat down with the PenaVega pairing to discuss how their comfortableness with each other enhanced their onscreen chemistry, why they’d work together on every project if they could, and what makes Hallmark Channel the best in the business.

TrunkSpace: So much of the success of Hallmark Channel holiday films relies on the chemistry of the two leads at the center of the story. Do you feel like you had a leg up on that because of the actual chemistry that exists between the two of you?
Alexa PenaVega: I have to say that Carlos and I are the goofiest, dorkiest public couple out there. (Laughter) But it’s really fun and entertaining to watch, so I think it really does help. There are little quirks that you just can’t write into a script that happen naturally when you’re married, and we were able to add that to the project.

TrunkSpace: From what we’re told, things can move pretty quickly on one of these films – you get the job and you’re shooting before you know it. Again, having the existing relationship must have allowed you to really hit the ground running.
Alexa PenaVega: 100 percent!
Carlos PenaVega: And Hallmark is amazing. Unlike most other projects, they’re really flexible with the script, which really led to Alexa and I…
Alexa PenaVega: We were able to explore.
Carlos PenaVega: It really led to, because of our relationship as a real married couple, bringing things to the screen and to life that you normally probably couldn’t get.

TrunkSpace: How did it all come together? Was one of you cast first and then the other brought in? 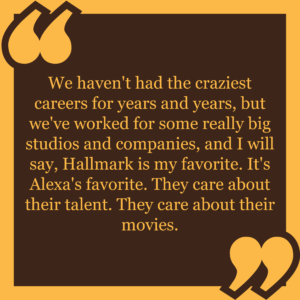 Alexa PenaVega: It was actually Hallmark. They knew how much we’d been wanting to shoot a film together, and we actually had a film set up last year, “Destination Wedding,” and unfortunately Carlos’ shooting schedule didn’t allow it so he had to drop out. But, when this one came up, they were like, “We think this is great, the timing is right, and you both will be able to dance.” And I love dancing!

So, they really presented it to us and were really looking for a project for us to do together. And we couldn’t be happier because our goal… if we could make it happen, every project we could do would be together for the rest of our lives.

TrunkSpace: You mentioned the dancing side of “Enchanted Christmas,” which seems like a great throwback to classic holiday films like “Whit Christmas,” something we don’t see much of anymore.
Alexa PenaVega: I totally agree. And you know, we shot this in Utah and everybody was so friendly and it blows my mind how much Hallmark movies just nail that Christmas holiday spirit – they have it down. And I think the script was special. Rick Garman did such a good job with it and more than anything, we had a director, Terry Cunningham, who just wanted that chemistry to be right there, up front. He’s like, “Look we have the script, the script is already good, but what you guys can bring to it will just transform it into a very beautiful project.”

This is my favorite Hallmark project that I’ve done thus far.

TrunkSpace: So in terms of your characters, what did they offer you from a performance standpoint that you have yet to tackle with previous projects?
Carlos PenaVega: Definitely the dancing, for sure.
Alexa PenaVega: Yeah, we never had to put that into a project.
Carlos PenaVega: It was interesting. Alexa and I had never been on sets where… the call sheet is like one, two, three, four… we’d never been the one and two. So as actors, normally the one and two set the tone for the entire production. They’re the ones in every day. So as an actor, it was really interesting coming in, in that position, where it was like, “Hey, you know what, I’m setting the tone with my wife,” which was really cool. She said it to me… “It’s the best experience I ever had working on a project.”
Alexa PenaVega: Yeah. Ever, really.
Carlos PenaVega: It was cool to come in and kind of just, I don’t want to say run the set, but we set the tone from day one.
Alexa PenaVega: We both had experiences where we worked with other people who really… it takes one rotten egg in the bunch to kill the whole vibe on set. So, to be working with my husband… it did not feel like work. We had fun every day.
Carlos PenaVega: She said it in one sentence. I said it in three. (Laughter)

TrunkSpace: Christmas is for spending time with family and building memories. Here you two are, shooting a Christmas movie as a family and building memories in an entirely different way. It almost sounds poetic.
Carlos PenaVega: Yeah. I like Christmas. Alexa LOVES Christmas! And Hallmark is amazing about families. Ocean was on set every day and the experience of just having him…
Alexa PenaVega: That’s our little boy.
Carlos PenaVega: Just the experience of having our family there and then having a good time… I think yes, that’s gonna to stay with us forever. But what’s amazing about film is that it also lasts forever. We’re always going to be able to go back and watch this. Our kids are going to go back and watch this.
Alexa PenaVega: Yeah, and we also worked with a team that I would love to work with again and again. Terry Cunningham and our producing team, they are incredible. It was unreal. Normally when producers come on set, people are like, “Oh boy, the producer’s here! Here we go!” Ours, her name was Cindy Bond, was so kind and loving to everyone, but also got work done, worked super hard, and nobody had to yell. Nobody ever had to get angry. It was just a pleasant experience for everybody.

They genuinely care. It’s not like these productions where it’s like, “Okay, we’re gonna slap this together and we gotta go.” They genuinely care about the happiness and quality that they’re putting out there and it shows. It really does show.
Carlos PenaVega: We haven’t had the craziest careers for years and years, but we’ve worked for some really big studios and companies, and I will say, Hallmark is my favorite. It’s Alexa’s favorite. They care about their talent. They care about their movies.