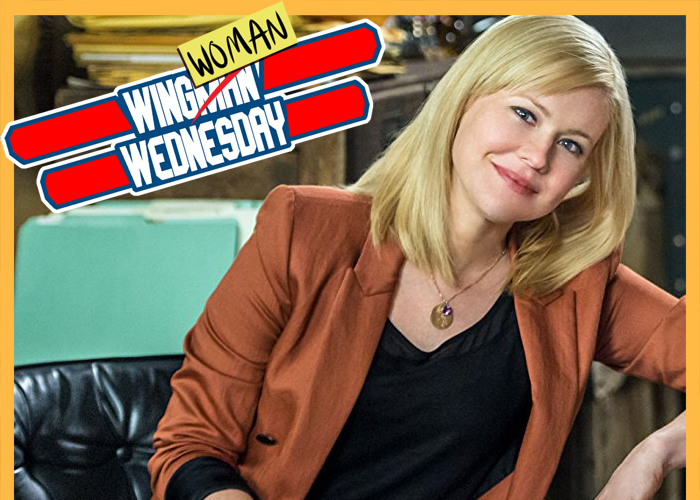 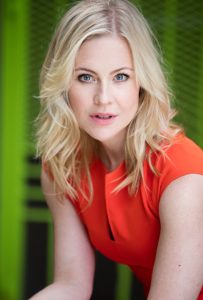 The latest installment, “Signed, Sealed, Delivered: Home Again,” premieres Sunday, September 24 at 9 pm ET/PT on Hallmark Movies & Mysteries. We recently sat down with series star Kristin Booth to discuss how the franchise has affected her life, how she is continuously surprised by the fan reaction, and what those fans will enjoy most about the latest installment.

TrunkSpace: We spoke with Crystal Lowe recently and one of the things that we discussed is how important you have become in her life. In terms of the journey, getting to work on a project that you not only connect with creatively, but to then also forge these types of lasting relationships, we would imagine that has to be the best care scenario?
Booth: You know, it really is. I have to say, despite loving the content and the writing of what we’re doing on “Signed, Sealed, Delivered,” it’s the relationships that have really made it a once-in-a-lifetime experience. Crystal and I are basically like sisters now. Martha Williamson and I are very close. It’s just really nice to be able to be a part of something where you actually love the people that you’re doing it with.

TrunkSpace: Does that off-camera chemistry translate to on-screen chemistry?
Booth: I think it definitely does. We really work as a team. We’re very collaborative. Martha’s words are very rarely changed 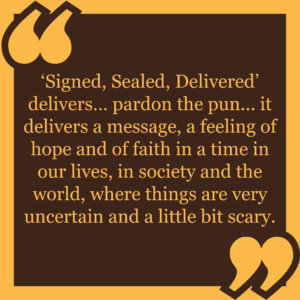 because she’s so brilliant. If there was something that didn’t make sense for one of us or if we had an idea, what’s so great about working on “Signed, Sealed, Delivered” is everyone’s really open to other people’s visions and their ideas. If it’s not what they wanted, we’re all cool and we just say, “Okay, it’s not gonna work.” It’s a nice working environment where you can express yourself artistically and feel safe to do so. That’s a really nice feeling. I think that only comes with the trust and the love that we all share with one another.

TrunkSpace: When the franchise originally transitioned from the episodic format to the film format, was that a concern or was it something you welcomed?
Booth: Well, it definitely concerned me at first because we didn’t know we were picked up as a movie series when we were told that the series wasn’t going to continue. There was a lot of unknowns at the time. Although the idea of the movie series was presented, it wasn’t set in stone. It wasn’t solid yet. That part of it made me very nervous, so I was obviously concerned.

However, the idea of going back to the two hour format excited me because I think the type of topics and the type of themes that Martha tackles in these movies or in the series as well, they deserve that two hour time rather than the one hour episode. I believe we’re able to do so much more and make the stories more rich with the time we have.

TrunkSpace: From a fan interaction standpoint, it seems like doing them as movies also makes them events when they do air.
Booth: 100 percent it does. Often Crystal and I will live tweet and Eric (Mabius) has live tweeted with our fans. The anticipation for each movie – it’s amazing to me. I love communicating back and forth via social media with the fans, the POstables, because I get super excited for them to see it because I know they’ve been waiting for so long. I’ll often get little message here and there saying, “We haven’t heard when the next one’s coming out. When is it coming out because I need my fix of SSD?” It’s just really rewarding for a performer to know that people enjoy it as much as they do.

TrunkSpace: What’s fascinating about the fanbase is that the level of interest and passion in the franchise is the kind you usually see associated with genre shows.
Booth: Right. I think you’re correct completely. “Signed, Sealed, Delivered” delivers… pardon the pun… it delivers a message, a feeling of hope and of faith in a time in our lives, in society and the world, where things are very uncertain and a little bit scary. What “Signed, Sealed, Delivered” provides for our audience is a safe place to come for two hours. People that they trust, the characters, they know that they are going to be inspired or they’re going to be touched or moved in some way.

What’s incredible to me is how many people, how many of the fans, have reached out and said just how much the show has affected their lives. They’re able to draw comparisons to either what our four POstables are going through or perhaps the B storyline of each movie. I think that’s what keeps bringing people back and drawing new fans each time we have another movie.

TrunkSpace: “Signed, Sealed, Delivered” first aired in 2014. A lot can change in four years, both over the course of a franchise and in the lives of those who inhabit the world. Do you feel like you’ve grown and changed along with your character Shane in that timeframe?
Booth: Oh, tremendously! 100 percent! I think you can’t avoid that if you’re a committed actor and you’re really giving your all to what’s happening in the character’s life. It’s bound to influence you personally. It’s bound to affect you emotionally. Hopefully, you grow as a person as your character grows throughout the series.

TrunkSpace: Is there a moment over the course of your time with your character where you felt like you really got to stretch as an actor and said to yourself, “Wow, I never thought I’d get to go here with Shane. I never thought we’d travel this path together.”
Booth: Well actually, there’s been several, to be honest. (Laughter) Martha is genius at always surprising me at what she brings to the table with her scripts. It’s so interesting too, because often upon the first read, I’ll get an impression, but it isn’t until I’m actually on set and I’m in the scene where I will have these amazing epiphany moments. She’ll often write something in it, descriptive-wise, like “Shane cries at this moment,” or whatever. As an actor, I’m like, “Oh, I don’t know if I’m going to be able to cry at that moment. Maybe it’ll come at another point or maybe it won’t come at all.” But with Martha’s writing, I’ve never experienced anything quite like what her writing does for me as an actor because she’s so in tune with the characters and it’s so right, that whenever I get into the scene, I start discovering all of this incredible stuff that I may have not thought about when I was reading it or working on the lines because I’m reacting to what Oliver’s giving me or what Rita or Norman’s giving me, or whoever I’m working with. 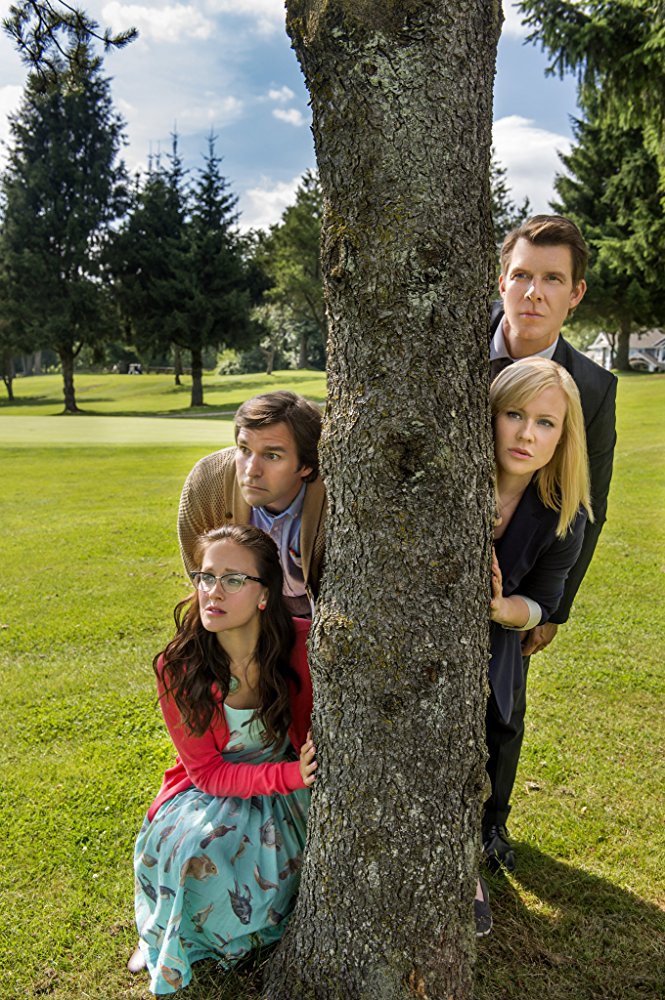 I’m always shocked and amazed and thrilled because there just have been so many times where I’ve thought in my head beforehand, “Oh, I don’t know if I’m going to be able to make this work or connect to it emotionally.” Then I’m in the scene, I’m saying the words, and tears are just flowing. (Laughter) It’s so interesting. I feel extremely blessed that I get to work with that type of material that is able to do that for me as an actor.

TrunkSpace: What do you think the fans are going to be most drawn to with the latest installment, “Home Again?”
Booth: Well, I think the POstables are going to be really excited. “Home Again” is the first time that we see Norman and Rita as a couple and Shane and Oliver as a couple. It’s been a long journey for both of them. It’s exciting to have those characters in a position now where they’re trying to navigate actually being together as a couple and admitting it to each other. (Laughter) I think the audience is going to love seeing that dynamic. Norman and Rita are at a certain stage in their relationship, but especially Oliver and Shane. This is the first time we actually see them as a couple. They’re still trying to figure it out. They have no idea what they’re doing. (Laughter)

TrunkSpace: You guested in a memorable episode of a show that we all love here, “Supernatural.” That series is going into its 13th season, which is an incredible feat. If “Signed, Sealed, Delivered” was to go on a similar journey, would you welcome playing Shane for such an extended period of time?
Booth: Definitely. It comes with a whole set of challenges that you don’t encounter when you’re doing something as a one-off or for a year or something like that. I mean, to be about to sustain the freshness, the lure as an actor of a character you’ve been playing that long, is a challenge in and of itself. It’d be very different if I wasn’t continually blown away and challenged by Martha’s words and scripts and stories and themes. But I am, and so I would welcome that for sure because I’m constantly surprised and wowed by the things that go on and the things that I discover about Shane even still.