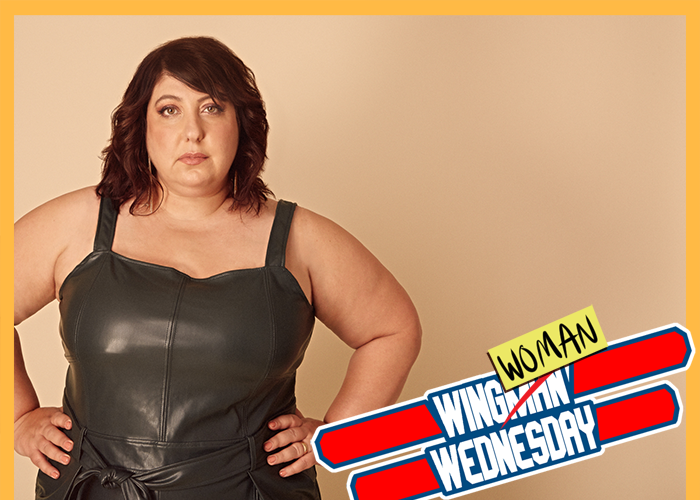 Even with her recent roles as Janice on the immensely-popular series Mr. Robot and as Peggy in the upcoming season of The Marvelous Mrs. Maisel, Ashlie Atkinson is not willing to jump into the future to see where it all leads, but she’s certainly looking forward to living it it. The Arkansas native hopes to direct episodes of a series she is a regular on while also lending her creative insight to a writer’s room on a project she created, but until then, she’s going to enjoy the ride her career has taken her on thus far.

“It’s been straight highlights for years now,” she said in an exclusive interview with TrunkSpace. “I hope it lasts.”

We recently sat down with Atkinson to discuss being the “new roommate” on Mr. Robot, internal poodle discovery, and the project with a stacked cast that we would have all sat down to watch.

TrunkSpace: Is there a level of nervousness involved for you when joining a series that already has an established on-set tone? Do you feel a bit like the new kid at school who has joined the graduating class in its final year?
Atkinson: That’s a really good analogy! The one I’ve been using is, “the new roommate” because it’s not about a fear of being bullied, like at school or anything, but definitely is a big decisive movement into an atmosphere that the other people have come to think of as a second home, right? And you’re, like, all up in their scenes and their work friendships and asking where the toilet paper gets kept and what day the trash goes out. And, of course, I can’t ignore that I’m moving into Bobby Cannavale’s old room, and he’s genuinely one of the best actors of my generation and yes, now that I think of it I probably should have been more nervous!!!!

TrunkSpace: Mr. Robot is such a critically-acclaimed series. When appearing in a project like this, with so many eyes on it, does it feel like a “game changer” moment? If work begets work in this industry, does the bigger the project lead to even bigger projects? 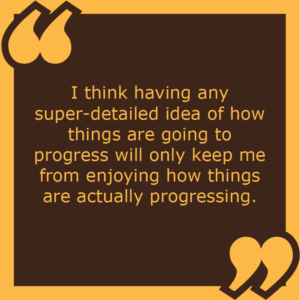 Atkinson: I meeeeean, we’ll see? Of course, yeah in some ways I’m doing things I’ve always wanted to do in Mr. Robot, and it is a big splashy exciting series, and I would *love* for it to lead to other opportunities to work with more folks I admire on impactful, cool work. But as far as any concept of “making it”, I’ve never really felt like that was a real journey I would take as a character actor, y’know? I’ve been acting for 15 years, and I have had peaks and valleys and right now is definitely one of the most exciting times of my career, and it’d be great if it could stay busy and exciting, I’d love that! But I can’t get too spun out about “staying relevant” or anything buzzy like that.

TrunkSpace: Walk us through what your first day on set was like for Mr. Robot. Was it a whirlwind, or did you take time to savor the moment?
Atkinson: Well, I had costume fittings and table reads and camera tests to see how Janice’s look worked, so I got to meet folks beforehand and have some casual contact without the pressure of shooting. But my first day of shooting was for the dinner scene with Dom and her mom, and then the crazy reveal outside the house, and it was SO. COLD. It was 2 o’clock in the morning and we’re outside, and there’s a huge crane, and my nose is running like I’m a third-grader, and Grace Gummer is making me laugh, and there’s just no time to overthink it. It was heavenly.

TrunkSpace: Your character is described as a “chatty taxidermist.” When we hear “chatty,” we think, “That probably means a lot of dialogue to remember!” What did your pages look like and how did you prepare to bring Janice to life?
Atkinson: What was new for me was how many scenes were me on a phone, talking to Dom as I did taxidermy. In the table reads, there were stage directions in those scenes that were literally “Janice up to her elbows in a poodle.” And I got super excited about the idea of learning that stuff, so my manager arranged for me to meet a taxidermist and work through the steps of the process. It feels so good to do scenes as a character and be able to perform the specific action the character is doing with even a small amount of ability.

TrunkSpace: For fans, the final product of a film or series is always the most memorable part, but for those involved in a project, we’d imagine it goes much deeper than that. For you, what is something about your time working on Mr. Robot that you’ll carry with you through the course of your life/career?
Atkinson: I’m gonna play pretty close to the vest here and just say that the conversations I had with Grace, with Rami, with Sam, with John Lenic, with Jeff Muhlstock… I learned a lot about what goes into making a show this rare, this special. Sam was kind enough to let me shadow him on some days where I didn’t have to act, and I got to really focus on his process and the collaboration between him and Tod and the crew and the actors. It was priceless.

TrunkSpace: You have appeared in so many memorable series over the years. Which for you was the most special in terms of an experience that you’ll never forget?
Atkinson: God, okay, a series. I mean, can I narrow it down to three? Rescue Me was special because it was my first recurring, and I made my first “camp friends” there – meaning the folks you meet on a job who you may or may not keep up with after it’s all over, but who you will always love. Then there’s Us & Them, my greatest heartbreak: the US remake of Gavin & Stacey, which Fox ordered 13 episodes of and then buried before we could ever air in this country. The cast was comprised of the nicest, funniest people to populate a prime time cast: Jason Ritter, Alexis Bledel, Dustin Ybarra, Jane Kaczmarek, Kerri Kenney, Michael Ian Black, and Kurt Fuller! It was RIDICULOUS, the talent. I’m still mad about that one. And finally, One Dollar on CBS All-Access, where I got to reunite with one of my favorite directors (and really good friends) Craig Zobel and go to Pittsburgh for five months in the summer with a rambunctious cast of collaborative character actor types and make a drama about the death of the American Dream. We shot it in 2018, and I’m still talking with most of those folks at least once a week!

TrunkSpace: Is there a character you had previously spent time with – even in a guest role capacity – that you wished you had more time to explore, and if so, why that person?
Atkinson: There’s that old saying: “Give an actor a week, they’ll take a week; give them a year, they’ll take a year.” I don’t think there has been a single role that I have ever been like “Okay, nailed it, moving on.” If I had to pick one to go back to, it would be a stage role — IMOGEN in IMOGEN SAYS NOTHING, a play I did at Yale Rep. She’s a bear masquerading as a human prostitute in Shakespearean England, and I would kill to get to inhabit her for a little while longer.

TrunkSpace: Beyond acting, you’re also a writer and producer. In the BEST best case scenario, what would your career look like moving forward? If you could greenlight your own future in the way you wanted it to play out, how would you split your time between acting, writing and producing?
Atkinson: I’d love to direct episodes of a show for which I am a series regular. I’d love to be in a writer’s room for a show I created. I have three films I’m working on developing, a jukebox musical concept based on an ‘80s movie that I am obSESSed with writing, and I want to keep directing plays. I’m writing a web series with my friend – I think having any super-detailed idea of how things are going to progress will only keep me from enjoying how things are actually progressing.

TrunkSpace: What has been the highlight of your career thus far?
Atkinson: Oh man. That’s too hard. I have been given a ridiculous number of high points in this life. BlacKkKlansman was one, getting to work on Mr. Robot with Sam was another, working on One Dollar with my friends was another. I made a bunch of rap videos for MTV as “Chunky Pam,” that’s another. I went back to my alma mater to direct a verse play about lesbian pirates, for God’s sake. I’ve been the lead, I’ve been the love interest, I’ve been the villain, I’ve been the comic relief. It’s been straight highlights for years now. I hope it lasts.

TrunkSpace: Time machine question. If you could jump ahead 10 years and get a glimpse of what your career looks like a decade from now, would you take that journey? If not, why?
Atkinson: No way. I think I’ll just let the mystery be. Also, how self-absorbed would I have to be to be like, “I have access to an honest to god time machine, so obviously my first priority is going into the future to see if I ever get to direct for TV” or whatever?