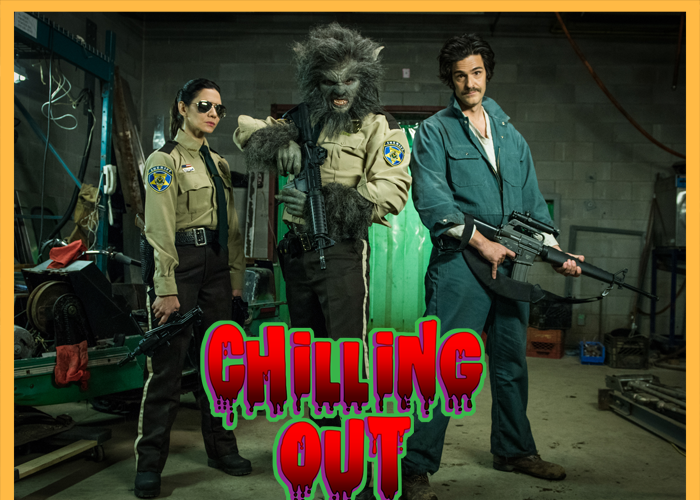 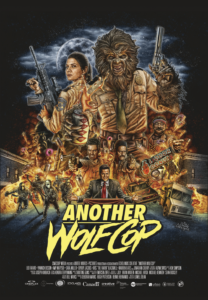 Chilling Out is where TrunkSpace talks all things horror and genre with those who work in the projects that give us the thrills and chills to keep coming back for more. This time out we’re talking with Lowell Dean, the brainchild behind everyone’s favorite lycanthropic authority figure, WolfCop. The writer and director of the popular horror/comedy mashup recently premiered the latest film in the franchise, “Another WolfCop,” at select theaters and is currently preparing to launch the sequel wide on Blu-ray, DVD, and digital home entertainment in 2018.

We recently sat down with Dean to discuss why he creatively felt the need to howl at the werewolf moon, the importance in finding the right tone, and how he worked on improving upon the original film.

TrunkSpace: When you first set out to make the original “WolfCop,” what was the intention? Were you setting out to produce a film that would be a calling card for your career as a writer/director? Were you looking to create a film that you yourself would sit in the audience of? What was the personal aspect of your creative mission?
Dean: I created “WolfCop” because it was something I wanted to see, that was my only real agenda. It was something I didn’t feel existed in the market at that time and I knew that if audiences wanted to see it half as bad as I did, we had a shot at something good. When I first wrote it, the main werewolf presence in cinema was “Twilight,” and I really wanted to “take back” the wolf-man to the look of a man in a suit, practical effects type of film. I wanted to get away from the CGI animal on all fours look. Basically, I wanted a modern (but more drunk) version of “Teen Wolf” or the Universal “Wolf Man.”

TrunkSpace: Having a film connect with an audience can be a bit like catching lightening in a bottle. You can never tell what will resonate and what will not. With that being said, when you were making the first “WolfCop,” did it have the feeling of a film that would find an audience and ultimately, give birth to a sequel?
Dean: I had no idea. I certainly hoped it would resonate, but I was half expecting it to be ignored or hated outright because of the goofy title. I was worried people would think it was a serious film just done poorly, despite the title. That’s why I love the title and was adamant to use it – it lets audiences know right from the top what to expect and that it is okay to have fun with it.

TrunkSpace: When you’re finished with a film and releasing it to the world, what 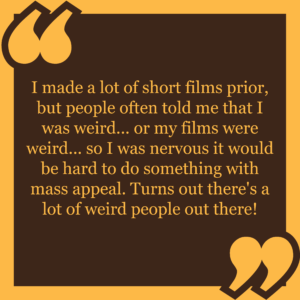 emotions do you wrestle with? Is it both exciting and terrifying at the same time?
Dean: It is like a breakup, in a way. You just have to let go. Up until that point if a film is done, you are in a battle to make it as good as possible, but once it is done and out in the world you just have to move on and try to find inspiration elsewhere. I was less worried about audience reaction with the sequel because we have a built in fanbase. I knew that fans of “WolfCop” would hopefully like it because we worked very hard to build on the experience of the first one and take things up a notch. That said, you never know for sure!

TrunkSpace: The horror/comedy mashup is a genre that can swing and miss badly when the tone is off even a little. How important was it to you to find (and strike) the balance between the two genres without going too far off in one direction?
Dean: Tone is everything. I think it is the most important part of a director’s job in the horror/comedy genre. It is a big challenge and to be honest, you just have to go with your gut most times and consider yourself the first audience member. I’ve been told often that the horror/comedy genre should be avoided but I can’t help it, I love the genre! When it is done right it is absolute bliss. I say this both as a filmmaker and an audience member.

TrunkSpace: Artists often have a damned-if-they-do/damned-if-they-don’t battle when it comes to following up a success. If you travel too far away from what made the first one so popular, you risk losing the fandom you built. If you remain too close to the original, you risk being called out for not growing and building on the original. As a filmmaker, is that something you thought about when putting together “Another WolfCop,” and if so, how did you tackle that creatively?
Dean: I had two big goals with the sequel. Number one was don’t just retell the first story, which I feel is a trap many sequels get into. I really wanted to do something new. My number 2 goal was to amp up the crazy and take the madness (practical effects, violence, comedy, action) to the next level. I honestly believe that within our parameters of budget and time, the whole team pushed really hard to make something both unique and twisted. It wasn’t easy!

TrunkSpace: We read that you felt the makeup was “worlds above” the first film and that in terms of effects, the quantity greatly surpasses what you put in the original “WolfCop.” Did that place more pressure on you as a director from a technical standpoint?
Dean: I feel like every team member who carried over from the first film felt a huge desire to do better with the sequel. We saw it as an opportunity to improve upon our work. Emersen Ziffle, the makeup FX artist, was overjoyed he could redo the makeup with all he had learned in the interim. I was overjoyed to have a chance to make a crazier film with more action since, there wasn’t much in the first film. I felt a lot of pressure to make the sequel better, but most of it was self-imposed.

TrunkSpace: When you look back at both films, what are you most proud of?
Dean: If anything, “WolfCop” 1 and 2 are personal validation that there is an audience for my weird ideas. That’s my take away! “WolfCop” was my first film as a writer/director, and prior to that I wasn’t really sure audiences would connect with my sense of humor. I made a lot of short films prior, but people often told me that I was weird… or my films were weird… so I was nervous it would be hard to do something with mass appeal. Turns out there’s a lot of weird people out there!

TrunkSpace: It seems that anything horror related tends to have a longer shelf life than most other films. It also seems like most fans of horror as a genre are more willing to try something new than perhaps a general mass market moviegoer. As someone who has worked within the genre, do you find that to be the case?
Dean: All I know is genre fans, horror fans specifically, are rabid and inclusive. They are a wonderful bunch. At every convention or screening I attend, horror movie fans are some of the sweetest, most passionate people you could hope to meet. It is part of the reason I wanted to get into genre filmmaking in the first place. I mean, tell me the last time you went to a romantic comedy convention!

TrunkSpace: The “WolfCop” franchise has such a specific tone and artistic point of view. Tonally, is this a sandbox that you see yourself continuing to play in as a filmmaker, or do you envision a creative departure in the future?
Dean: I love the sandbox of horror/comedy and the tone we strike in the “WolfCop” films. That said, I don’t want to only make “WolfCop” films. I want to try a bit of everything. That is the joy of being a writer and director, you get to try new things. I want to make dramas, action films, comedies, thrillers… I want to do it all!

TrunkSpace: Speaking of future, what’s next for you? What can fans of your work look for in 2018 and beyond?
Dean: I’m currently in post production on “SuperGrid,” a post apocalypse action film about two brothers on a dangerous cargo run. Hopefully it will be out by next summer. Beyond that, I’m just writing new scripts and looking for new directing jobs!

“Another WolfCop” roars onto Blu-ray, DVD, and digital home entertainment in 2018.