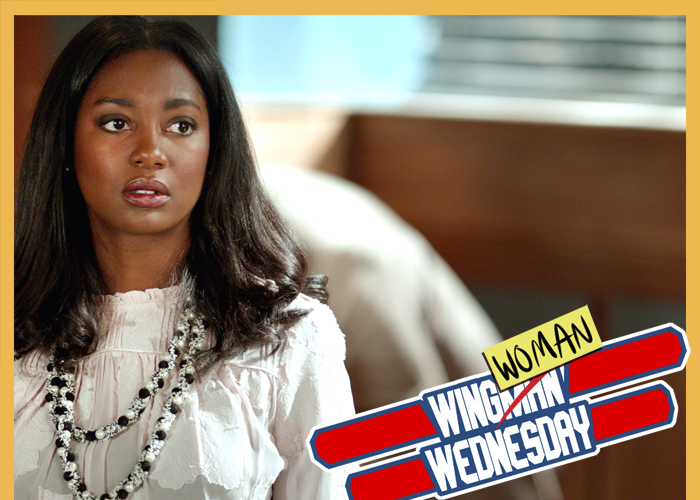 When you’re pursuing your dreams and things don’t go according to plan, it’s easy to get discouraged and drift from the personal path you’ve set yourself on. It wasn’t that long ago that Mouna Traoré considered walking away from acting, but the joy she experiences while performing kept her focused and driven to succeed. Now she’s starring in two new series, BET’s “In Contempt” and “Condor,” which premieres on the Audience Network June 6.

We recently sat down with Traoré to discuss how working on “In Contempt” has bolstered her confidence, the thing she reminds herself of daily, and why she’d like to establish herself as a writer in the future.

TrunkSpace: You’re currently starring in BET’s “In Contempt.” As far as your own personal journey with the series thus far, where has it impacted your life the most?
Traoré: I think that starring in “In Contempt” bolstered my confidence more than anything else. As a performer, it’s natural to feel insecure because there is so much rejection, and before this project I was very anxious about what direction my career was going to take. I was very clear on the fact that I wanted to work on projects that reflected my social and political views, and made career decisions that reflected that, but I never imagined that my dream job would manifest so quickly or so in line with who I am and the kind of stories I want to tell.

TrunkSpace: The show tackles a lot of hot button topics and handles them in a very real, grounded way. How refreshing is that as a performer to be able to work on a series that is balancing both entertaining people and saying something substantial about the state of things at the same time?
Traoré: It’s not only refreshing to work on a series that is both entertaining and socially engaged, it’s also inspiring. Working on “In Contempt” has been an incredible learning experience. It feels wonderful to be part of a project that validates the stories of oppressed and marginalized people while it actively empowers its audience. For the first time, I feel like I’m using my talent to make a difference and I am beyond grateful for the opportunity!

TrunkSpace: Did you find a connection with your character Vanessa out of the gates or did it take some discovery to find who 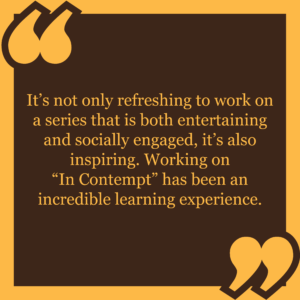 she is beyond what was presented to you?
Traoré: As soon as I read the breakdown for the character Vanessa Hastings I thought, “THIS IS ME!” Vanessa is a fish out of water at the Defenders Association and I’ve felt like that a lot. Like Vanessa, I’ve been very accustomed to being the only black person in a lot of spaces. I also grew up with white step parents, and have felt very removed from black communities at times. Reading the scripts, I felt as though I knew this girl implicitly. At times, I still am that girl!

TrunkSpace: One of the things that seems so great about BET as a network is that they really give their series a chance to grow and find an audience. Is that a breath of fresh air as an actor, not having to constantly look over your shoulder wondering if a cancellation is looming?
Traoré: It’s definitely lovely to feel like our show has the opportunity to grow and find its audience. It takes a lot of pressure off you as a performer and gives you a kind of freedom and confidence. It’s also awesome to know that the people who watch are dedicated fans, who are in it until the end.

TrunkSpace: We’ve read that you’ve considered walking away from acting on a few occasions. What helped you to stay the course and continue to reach for your dreams?
Traoré: Knowing that deep down, the purest joy I’ve ever felt since I was born has come from acting is the only thing that has kept me from walking away. And valuing the process and experience of creating as an actor more than the goals or the superficial rewards. When I realized I had the ability to make choices based on my happiness and not an idea of what I should do or what other people want, it changed everything. And having a team that loves and supports me 100 percent has also helped!

TrunkSpace: Is it difficult to sometimes separate the business aspect of acting – which at times can be a little deflating – from the side of the craft that fuels you from a creative space? Is it important to remind yourself WHY you love it?
Traoré: The only thing that keeps me in the industry is the knowledge of why I love it. I remind myself of why I do this daily. And I choose to create my own work to keep that feeling alive. Being an artist is a privilege and the business aspect is a necessary component no matter what level you’re working at. You can either use it to your advantage or let it consume you.

TrunkSpace: Beyond “In Contempt you’re also set to star in “Condor” which premieres on June 6th. The series has a really deep bench in terms of the quality of talent both in front of and behind the camera. Again, as far as your experience is concerned, what did you take from your time on the show? What will you carry with you through the rest of your career/life?
Traoré: After working on “Condor” I was moved by the level of dedication and artistry I observed from the cast and crew members on the show. For such a big budget project with so many big names, it was a remarkably relaxed set. The directors as well as the showrunners Jason Smilovic and Todd Katzberg completely trusted us as actors to do our jobs, and it was liberating. The experience illuminated the fact collaboration is key to creativity.

TrunkSpace: Your character Iris seems far removed from Vanessa of “In Contempt.” Is that part of the dream, getting to play a diverse group of characters in a diverse body of projects?
Traoré: Playing vastly different characters is the most exciting part of the job! It’s such a dream to bounce around different realms of human experience. Iris is moons away from Vanessa, and it’s so much fun making that leap. It can be challenging but also educational.

TrunkSpace: We read that acting first landed on your radar at age three. If you could sit down and have a conversation with that younger version of yourself today, what would she think about your path to becoming a professional actress?
Traoré: She would probably be very unimpressed with me. She would probably say, “Why aren’t you famous yet?” and roll her eyes. She’d probably think I should’ve started earlier and suggest I should’ve run away from home or something. Young me was an idiot. Old me would have a lot explaining to do.

TrunkSpace: Finally Mouna, we spoke about moments where you considered taking a break from acting, but we’re curious, as you look further down the road, are there things professionally that you want to accomplish outside of acting and do you see a day when acting takes a backseat to those other pursuits?
Traoré: I would really love to also establish myself as a writer. I dream of having my own TV show like Issa Rae and eventually creating a whole empire of content for film and TV. It’ll be a long time before acting takes a backseat, but I can see myself getting to a place where creating content is more stimulating than performing it.

“In Contempt” airs Tuesdays on BET.