After five seasons of heartwarming storytelling, the beloved family drama series “The Fosters” is saying good-bye to fans with a three-day season finale event beginning tonight on Freeform. Star Sherri Saum, who plays Lena Adams Foster, is still in awe of the impact that the show has had on viewers, but she’s even more enamored by the impact that the viewers have had on her.

We recently sat down with Saum to discuss what she learned in her journey as Lena, how she will always compare future jobs to her time on “The Fosters,” and why she’d be extra motivated to solve mysteries on a full stomach.

TrunkSpace: With “The Fosters” coming to an end, you’ve had to say good-bye to your on-set family, but in a way, does it also feel like you’re saying good-bye to the fans? They have come with you on this journey since 2013 – are they part of the equation with it now signing off?
Saum: I feel I have forged a connection with the cast and the supporters of our show that will transcend the end of the series.

TrunkSpace: Over 100 episodes is a long time to spend in another person’s skin. It’s not your longest span with a character, but was Lena different? Did her journey affect you differently as an actress than that of previous jobs, and if so, why?
Saum: I’ve learned more on “The Fosters” than I’ve learned on any other show. Things that informed me not only as an actor but also as a person and especially as a mother. I’ll take these lessons with me for a lifetime.

TrunkSpace: How much did Lena grow and change from the first time you read for her to where she is in the final three 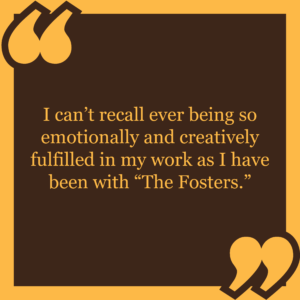 episodes set to start airing tonight on Freeform? Within that span, what were some of the biggest character shifts or storylines that you didn’t see coming?
Saum: Lena began as a definite momma bear, the soft heart of the family. And while she was fierce in her role as momma and protector of her kids, she wasn’t always as good at fighting for what she deserved in her career. She became a fighter over the seasons – probably influenced by Stef – and in the end of the series we finally see Lena stepping up and owning her full power as a woman, a mother, and a community leader.

TrunkSpace: It’s so hard to tell what will connect with people and what won’t when it comes to television. Was it a surprise just how invested viewers became in not only the series but in your character as well?
Saum: I think part of me is still in awe of the impact but the other part totally gets it. We gave much needed validation and visibility to families and people. It had been so sorely lacking in the landscape of TV.

TrunkSpace: What is something that you are going to take from your experience on “The Fosters” that you will apply to your professional life moving forward?
Saum: Being part of such a special project has set the bar high for me as an actor. I’m not so naïve to think I won’t have to take on some projects in the future for practical reasons – but I’m always going to have a sense of wanting to do more – to be part of telling better stories because of my experience with “The Fosters.”

TrunkSpace: What about personally? Where has the series impacted your life the most and what will you look back on in 20 years and think of fondly?
Saum: Personally I’ve been able to meet people and hear stories about the impact “The Fosters” has had on them. Stories that humble me beyond belief. I’ll never forget how it feels to make people feel included and loved. People all over the globe. It’s astonishing.

TrunkSpace: You posted a picture on Twitter about a month ago, drinking coffee (we assume that was just coffee!) while watching “Scooby-Doo,” referencing it as living your best life. So, we have to ask, if dropped into a real-life mystery complete with “jinkies” moments, which “Scooby-Doo” character’s mystery-solving skills would yours most resemble and why?
Saum: I’d be Scooby-Doo or Shaggy for sure. Always extra motivated to solve a mystery if I’m well fed!

TrunkSpace: Continuing with the idea of living your best life, as you look forward, what does your best professional life look like? If you could write your own future, how would you script your career moving forward?
Saum: In my perfect world I’d be a serial series monogamist. And some of my roles would include physical bad-assery. In some superhero way.

TrunkSpace: You’ve guested on some great shows over the course of your career. Is there a character who was particularly interesting to you that you wished you got to explore further?
Saum: To be honest, I’m still in a love bubble stupor over “The Fosters.” It’s eclipsing anything I’ve done previously. I can’t recall ever being so emotionally and creatively fulfilled in my work as I have been with “The Fosters.”

TrunkSpace: Finally, as fans gear up to say good-bye to “The Fosters” for the last time, what do you want to say to them about the journey and how their loyalty to the show has impacted you over the course of its run? How have they made this a fulfilling chapter in your own life?
Saum: I just want fans of the show to know that their support and love of the show has elevated the experience into something I will never, ever let go of. And I will always remember how hard they fought to keep it going.