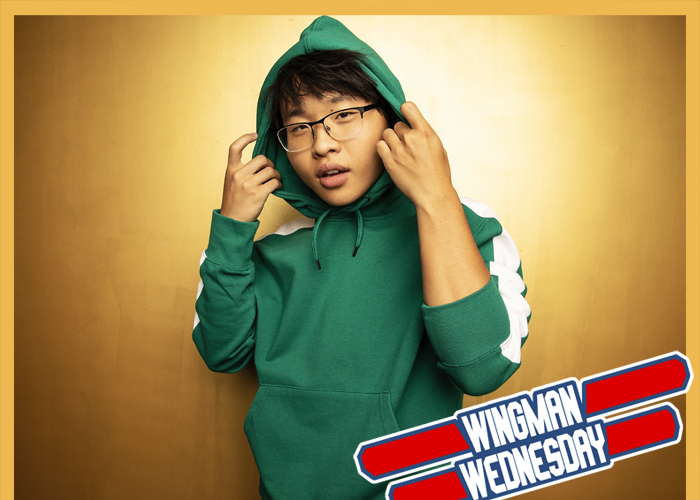 The loveable character Dave Kim may have started out as a singular guest spot on the popular ABC series “The Goldbergs,” but like much of what happens in the world of Hollywood, there’s a surprise around every corner. For Kenny Ridwan, who dreamed of becoming a working actor while in high school, that surprise has lasted six seasons and more brightly-colored turtlenecks than any one neck has the capacity to handle.

We recently sat down with Ridwan to discuss G.I. Joe aircraft carriers, how the series has impacted his life, and why he’s absorbing as much of what goes on behind the scenes as he can.

TrunkSpace: The sixth season of “The Goldbergs” just premiered last week. Do you still get excited as you lead up to a new season?

Ridwan: Yeah. It’s always exciting. There’s so much for people to see.

TrunkSpace: We saw that you have the original Freddy Kruger, Robert Englund, stopping by this year. Were you on set for that?
Ridwan: I was not on set. I actually read that. I don’t get all the scripts, but I actually read that on Sean’s (Giambrone) social media. I was like, “Wow!” I really wish I was there.

TrunkSpace: You mentioned that there’s so much to see in the show. We grew up in the ’80s, so for us it’s fun to watch and absorb the set pieces and what’s going on in the background of scenes. From wardrobe to set design, is it a fun show to be on, given the environment that you’re in?
Ridwan: Oh, 100 percent. Well, you’ve seen my character. I have a bowl cut. I have a turtleneck on. I feel like I’m very indicative of a certain style in the ’80s. 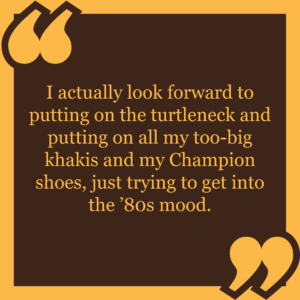 TrunkSpace: Speaking of those turtlenecks, no neck has been more abused in the history of television.
Ridwan: (Laughter) That’s super funny. I agree actually. (Laughter) I remember in the very beginning I was like, “I don’t really like turtlenecks, they feel constricting.” But now I’m like, “Wow!” I actually look forward to putting on the turtleneck and putting on all my too-big khakis and my Champion shoes, just trying to get into the ’80s mood.

TrunkSpace: And they’re not just turtlenecks, they’re brightly-colored turtlenecks!
Ridwan: Always a pastel color. My favorite one is the light blue one, not going to lie, but the rest of them are pretty good too. It’s to the point now where every time I’m not in a turtleneck, it’s weird.

TrunkSpace: And again, being in that wardrobe, on that set, it mustn’t be difficult to sort of get lost in the character and be whisked away to a different time period.
Ridwan: It’s a lovely environment to work in. Everybody’s super nice. It’s one of those sets and one of those work environments where you feel like everybody’s really working toward a common goal of making the show better. Also, I’d really liken it to a family-like situation. But in terms of us really recreating what was before, that’s also fun too because often Sean and I, we’re ’90s kids. We were born in ’99. We don’t really know much of what came before, but it’s just really fun to put ourselves in a situation where we almost have to reenact something exactly as it was.

TrunkSpace: We personally get pretty excited every time we see the G.I. Joe aircraft carrier in the background of the Goldberg’s basement. In our day, that was THE toy every kid wanted.
Ridwan: (Laughter) We play with it between takes sometimes. It’s really fun.

TrunkSpace: You started on the show in 2014. Where has the job impacted your life the most?
Ridwan: That’s a really interesting question, actually. In high school when I was working – and I was working for a whole week and I was out of school – I’d say it really affected my high school experience really, because I was invited to be in a more mature setting than a lot of my classmates. I think that really affected me in a way where I ended up reaching a certain level of maturation before other people. I just remember being in high school and really wanting to be an actor. The show really let me realize that dream of mine, that passion of mine.

TrunkSpace: When you first read for Dave Kim, was he always meant to be a reoccurring character?
Ridwan: No. He was actually supposed to be a one episode guest star. I had three scenes in the first episode, maybe four. Just two days of work. I really never expected it to go any further than that. But, it did. Now, going into our sixth year of production, looking back, it’s really ridiculous for me, because it’s like, “Wow, look how far we’ve come.”

TrunkSpace: You’re currently studying creative writing at Columbia. Do you see yourself staying in the industry but working more behind the scenes in the future?
Ridwan: Well, I’ve always really been interested in screenwriting, and I’ve always really wanted to be a screenwriter, a producer, or a director. But really for me, it’s really wherever my career takes me, because they’re such parallel fields, acting and what’s behind the camera. Honestly, I’d be very happy if I was an actor for the rest of my life. I’d be very happy if I’d be an actor/director. But my major now is creative writing. I’m really trying to pursue that in a way where I could become someone behind the camera later on.

TrunkSpace: Do you find yourself absorbing more while on “The Goldbergs” set now that you’re at Columbia studying creative writing?
Ridwan: Yeah. It’s a single camera show – well, it’s not technically a single camera show, but it’s shot in a very similar way to some single camera shows. There’s sometimes when I’m not on camera and I’m able to be behind the camera and look at what the camera operators are doing, and look at what our DP is doing, and really study from them and shadow them in a way, while I’m on set and acting, which has been a really, really, really informative experience for me. It has molded my decision in terms of, “Okay, this is something I really think I could do, or think I should pursue.”

TrunkSpace: How do you juggle your career and school at the same time? How do you find a balance?
Ridwan: Well, I’d be lying if I said that it didn’t include just a lot of time in the library, just working on schoolwork. But, I think that now that it’s my second year doing this – it’s my sophomore year of college, and my second year flying back and forth, and shooting the show – something I really learned throughout the first year is just, if you really want it, you have to work to get it. For me it really materialized and became, “Okay, if I really want to do well in school, if I really want to be an actor, I just have to put in the work.” That’s just what I’ve been doing.

“The Goldbergs” airs Wednesdays on ABC.