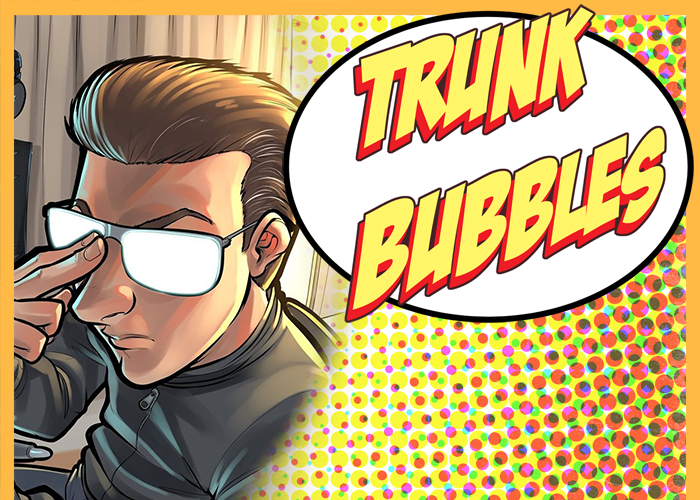 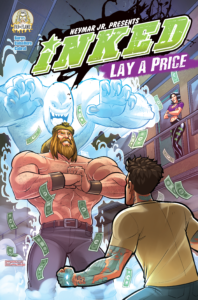 TrunkSpace: How would you describe your art style?
Caballero: My art style is midway between manga, American and European style. I try to bring the dynamism of the manga comics, the charismatic expressions of the American style and the interesting proportions and experiments that many Europeans display.

TrunkSpace: How important were comic books in your life growing up and is that where you discovered your love and inspiration for drawing?
Caballero: When I discovered the wonderful world of comics and the possibilities that I would be able to do with it, I decided that I wanted to tell my own stories to the world. After all, all I needed is my imagination and a lot of hard work. It’s the best decision I’ve ever do.

TrunkSpace: Was there a particular artist or title from your childhood that you remember being drawn to and inspired by?
Caballero: There where many, but the first artist that absolutely inspired me was Todd McFarlane doing Spider-Man. It was like a big smack into your face. I wanted to see his art over and over. I tried to imitate his art style for a while. Great times.

TrunkSpace: How did you decide to approach your career in comics? Did you formulate a plan of how you wanted to attack what is known for being a hard industry to crack? 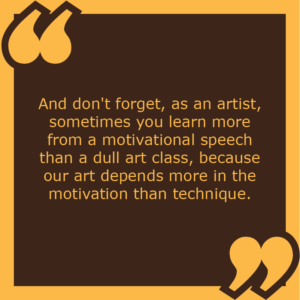 Caballero: I was very persistent. I had to start working in kitchens as an assistant cook when I was very young. With all the money I earned I spent it all on materials to keep drawing even after work. Since my parents saw that I was very stubborn with comics, they put me in contact with an old school artist, and I worked/studied with him for some time. Later on when I had many more artist friends, I was brought into an animation studio. Somehow the director of the studio saw potential in my comics and he decided that I would work in the animation studio as a layout artist. I did learn a lot from them – things that would eventually help me in comics. So from then on I’ve been working, some time in animation and some other time in comics. It has been a fun ride so far, although some times life is tough.

TrunkSpace: What was your biggest break in terms of a job that opened more doors for you?
Caballero: When I worked on the comic Helm, which is an independent comic. To tell the truth, I didn’t know if it was going to have a future or not, all I knew is that when I saw the script I absolutely loved it and I decided to give my best effort ever. Then, surprisingly, we where nominated to the Will Eisner Industry Award in 2017. We didn’t win, but the mere fact that we where nominees was a big reward, so every time I need to introduce my work to a new client, that is my best reference I can give. I’m still producing a single page each week, by the way.

TrunkSpace: A lot of people say that breaking into comics is the hardest part of working in comics. How long did it take you before you started to see your comic book dreams become a reality?
Caballero: In my case I was very lucky. I finished my first work with the animation studio and I dedicated myself to create my own comics. After all, that was my very own goal in life. Since I did not have many obligations, I decided to make my own comic called Zeraky. Even my brother helped me bringing some ideas to life. It became a project so rich and I was learning so much – and somehow I did 10 comics before the release of the first one. So the lucky part comes when my brother met a very warm-hearted lady who fell in love with my art, comics and dedication – and she sponsored us for five comics, which we released in our country. We, as brothers, became famous for a short period of time for our comic. This was in the year 2000. I still think that I will come back some day with my comic, with a renewed art style. And I hope this time, we come back for good.

TrunkSpace: Is there a particular character or universe you always find yourself returning to when you’re sketching or doing warm-ups?
Caballero: I rarely do warm ups, but when I do, I love to draw monsters out of me imagination.

TrunkSpace: Is there a specific title or character that you’d like to work on in the future and why?
Caballero: I would love to draw Batman. I love the dark tones and hard shadows drawn into that comic, even if it is different than what I usually do. I also love the contrast of the classic architecture of Gotham against the high tech of Batman’s gadgets.

TrunkSpace: What is your ultimate dream when it comes to your career in comics? Where would you like your path to lead?
Caballero: I’m convinced that my subconscious has a plan that I’m not aware of, but somehow my destiny will be doing Zeraky again. I daydream that the people all around the world will look at it, and see potential in “the story of the heroes that nobody anticipated, and no legend foretold their arrival.” But before I do start with that, I need to buy my own house first, otherwise, the rent will haunt me forever. It does not matter if I start Zeraky at 70 years old.

TrunkSpace: What would you say is the greatest strength as an artist?
Caballero: I hang on. For example…
1.) It does not matter my parents told me I had no future in it
2.) It does not matter if some people used to mock me for my drawings
3.) r not getting paid sometimes
4.) That I’ve missed parties or vacations 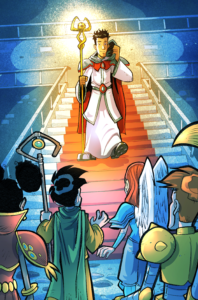 5.) Not having as much friends as I wanted to

I’ve resisted hard times. One animation director told me to hang on. I keep working tirelessly and I resist the difficulties of life. So far, everything has paid off. Good news: everything gets better, slowly and steady but it does. I hope it keeps that way.

TrunkSpace: How has technology changed your process of putting ideas/script to page? Do you use the classic paper/pencil approach at all anymore?
Caballero: I love working on paper, and sometimes I’m even faster and the artwork looks more alive. But the problem with it is that it is a lot of effort physically, so instead of doing three pages at day (my ideal), I do two or even one and a half. Maybe I need to get used to it because maybe in the future I will seriously work on it again.

TrunkSpace: What advice would you give another young aspiring artist who is considering a career in the comic industry?
Caballero: You have to be very, very stubborn. You will have to pass many hard trials that life will give you in order to earn one of the most beautiful and passionate jobs in the world – of all time. Be obsessed with it. Focus on improving your artwork in order to move people’s feelings – to tell a story that was born in the back of your head and in the bottom of your heart. And don’t forget, as an artist, sometimes you learn more from a motivational speech than a dull art class, because our art depends more in the motivation than technique. Have an iron will!

TrunkSpace: Making appearances at conventions: Love it, leave it, or a combination of both?
Caballero: I absolutely love to go, mainly to say hello to my colleagues, buy my favorite comics with a signature of my favorite artist, and (when I used to have my own comic) sell my comics and meet my readers. There is no better fuel and reward for your spirit than to hear your readers exited with your stories. This is the very best feeling you will ever have after love.