This time out we’re chatting with author Yoav Blum about the recent English translation of his debut novel “The Coincidence Makers,” how it all began with a daydream, and why he hopes his best work is still to come.

TrunkSpace: “The Coincidence Makers” was recently released in English. With it being your debut novel, what emotions were you juggling with leading up to that moment? Is it difficult putting so much of yourself into something and then releasing it into the world?
Blum: It is always surprising to find how exciting and frightening it is to know someone is letting fragments of you inside their head. “The Coincidence Makers” was originally published in Hebrew in 2011, and I have published two more books since then. The publication of the English version is also a throwback to the self I was seven years ago, and it causes me to re-examine the book, and wonder if I would have written it the same way today, being who I am now.

TrunkSpace: Prior to “The Coincidence Makers” you were working in short stories. When you first decided to move to long-form storytelling, did you have to adjust your process? What changed between the writer you were then to the writer you are since completing the book?
Blum: I found out that when I’m writing a book, I’m diving much deeper into myself. A short story will almost always be the way I planned it, but I only know what a book is about after finishing it, observing it “from the outside,” finding out its true personality. I still like to write in “small bits” of time, but the fact that the writing process takes months (and even more) allows another layer of self to emerge.

TrunkSpace: The story focuses on three people who work for a secret organization that manufactures what appears to be random coincidences. It’s a great concept and one that many writers will be cursing themselves over for not having come up with it themselves. How long has it been gestating in your mind and what was the real world coincidence that sparked the idea?
Blum: It started from daydreaming, as always. I read a book about the mind-body problem, and it started a series of thoughts. How do decisions created in an entirely spiritual world (by God) create a new thing in the physical world? I wrote a short story about some “middle-men” as a way to contemplate that. Then, after some time, I decided to develop this short story into a book, and this time it became more extensive and dealt with free will vs. destiny, the way we make decisions, and, of course, love…

TrunkSpace: As you look back at the work, what are you most proud of when it comes to “The Coincidence Makers?”
Blum: It was a work of passion, from a clueless mind that had no idea if someone will ever read it, and he wrote it anyway. I like that in my past self. It was also a very private text, sometimes, and the fact that other people found themselves in it keeps bringing me joy.

TrunkSpace: There’s a great genre swirl going on in your book. Readers really do get a little bit of everything by the time they finish the last page. Was that a conscious creative game plan on your part when you first started putting it together? 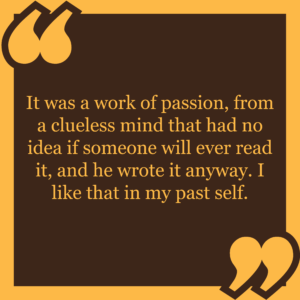 Blum: In a nutshell, I wanted to write a book I would love to read, and I wanted to put in it what I liked in books – whatever genre they are. So I wrote to myself, not trying to aim to a particular genre, as long as the small reader in my head was satisfied, that was enough.

TrunkSpace: You wrote your first book when you were six years old, which based on the description, sounded a bit like a comic book given the art element. Any desire to take your skill set to the sequential pages of the comic book medium?
Blum: I think about that sometimes. That would be cool. One of my short stories in the past was written initially to be turned into a comic, but it didn’t happen. I can’t really draw, so if there is someone out there that would like to cooperate in creating a graphic novel – even based on TCM itself – that can be very interesting.

TrunkSpace: How long did it take for you to discover your voice as a writer?
Blum: I’m not sure I fully discovered it yet. The writer that wrote TCM almost a decade ago is different from who I am today. I hope my best and sharpest book is somewhere in the future, and not in the past. Also, I want my voice to be fluid, and to change with time, the same way I change.

TrunkSpace: Regarding the process, is writing a labor of love for you or does it feel more like labor? Do you enjoy the process?
Blum: When I’m inside it, it is a labor of love but for some reason it is still always hard to start. After I convince myself to start, I can be “in the zone” many times, but the convincing part is the hard part… there is always something else to do, isn’t it?

TrunkSpace: And what does that process look like? What are the ideal conditions for putting in a good day of writing?
Blum: Each book was a different process. But if I try to generalize it – I gather notes and ideas for an extended period, months or more, and try to see if some broader idea comes out. I try to define what is my starting point – my “what if,” and to see how I can dive into this “what if.” The actual writing is most of the time defined in advance – I sit down intending to write a particular chapter or scene. I sometimes listen to music I choose that can help for that specific scene. From time to time I stop and look at what I have and make sure the way I walk leads to where I want to get.

TrunkSpace: Do you self-edit as you write?
Blum: Yes, but I try to do it without hurting the flow. There will be a few rounds of self-editing after finishing the first draft anyway before I would dare show it to anyone.

TrunkSpace: Where are you the hardest on yourself as a writer?
Blum: I never feel that the manuscript is “finished.” There is always more editing to be done, and you just have to stop somewhere, or you will edit yourself to oblivion. I try not to read my books after publishing them, as I know that most of the time I would ask myself – “who the hell wrote that?”

TrunkSpace: What are you working on now and what will people be able to read next?
Blum: As I said, I don’t like to discuss things I work on before I feel they are ready to be exposed. I try to experiment with different kinds of writing at the moment, and there is work with the publications of TCM in many languages. But hopefully, TCM will not be the last of my books to be published in English.

“The Coincidence Makers” is available now from St. Martin’s Press.