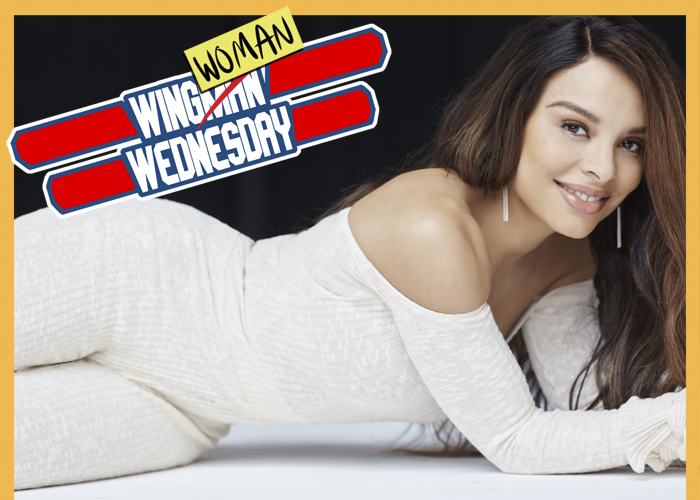 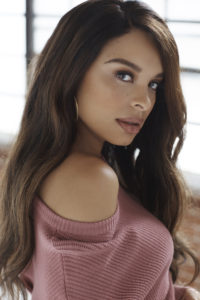 Antonique Smith joined the cast of “Luke Cage” in Season 2 as Nandi Tyler, a detective who has a complicated past with fellow officer Misty Knight, played by Simone Missick. As the layers of their relationship are peeled away, more and more of Nandi’s true intentions are revealed, creating a fascinating dynamic in an already fascinating series.

A Grammy-nominated singer/songwriter and accomplished actress who kicked off her career on Broadway as Mimi Marquez in “Rent,” the New Jersey native is ecstatic to have joined the Marvel Universe, and although Nandi isn’t part of the original comic book world, there is an interesting future for the character should viewers get to see more of her in Season 3 and beyond.

We recently sat down with Smith to discuss prophetic journal entries, the joys of playing a real badass, and why her career took various left turns instead of a single predetermined right.

TrunkSpace: All of the “Luke Cage” Season 2 episodes are now out there and being absorbed by fans all over the world. What has the experience been like for you thus far?
Smith: It’s been amazing. Back to back, within like 10 days, the show is up and everybody is going crazy over that, and then the next thing, the “Strong Black Lead” campaign dropped Sunday and it’s just been a beautiful week. Lots of love. It’s been really wonderful.

TrunkSpace: What’s the overall Marvel ride been like for you, from finding out you’re becoming a part of the universe to where you are today?
Smith: I’m a big Marvel fan. I think Marvel does it the best. I didn’t grow up really knowing most of their superheroes. I knew Spider-Man, but a lot of the other ones I didn’t know growing up, so for them to be able to come in the last 10 years, and not only introduce new superheroes, but billion dollar franchises… the quality of how they consistently make everything, from the movies to also the TV shows, is incredible. And so, I have just had goosebumps this whole time since I found out. It’s incredible. And then for us to come right on the heels of “Black Panther” is… it’s just had such meaning and is just beautiful.

I honestly wrote in my journal early last year, like in January. You know how you do kind of your New Year’s resolutions and you go through the year, and two of the things that I wrote down were, “I want to join the Marvel family” and “I want to join the Netflix family.” And I wrote it on two separate lines. So months later, I guess about six months later, I had joined the Marvel and the Netflix family at the same time, which is crazy.

TrunkSpace: They merged into one line! 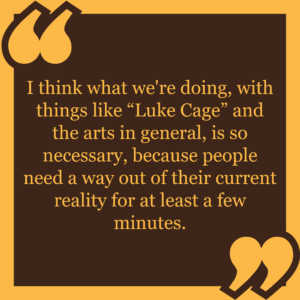 Smith: Yeah. So people. write it down! Write it down, ’cause stuff comes true.

TrunkSpace: What’s is so interesting about Marvel as a company and why they have such success across the board is because they treat each project as its own thing. Each one has a unique feel and tone, and certainly “Luke Cage” falls into that game plan because it doesn’t feel like any of the other shows.
Smith: It does not. It has its own unique feel and I love it. I was a fan of the first season. I honestly think as amazing as the first season was, I think this season is even better. I think the characters and the storyline… everybody just brought their A-games and it was just so amazing.

TrunkSpace: And your character Nandi didn’t exist in the comic books. Did that give you freedom to make her your own?
Smith: It did actually. It did. It gave me freedom to play around and decide more how I wanted her to be and less necessarily having to stick to what the fans were gonna already expect based on her having been in the comic books already. So, it was fun. I got to kind of be creative with it.

TrunkSpace: There’s always that intense pressure when someone is cast as a well-known character, where immediately people are second-guessing the decision. “Is she right? Can she pull it off?”
Smith: Right. Well, I had to deal with that when I played Faith Evans in “Notorious.” The whole world knew who she was. So, there was definitely that pressure of nailing it and trying to be as authentic as possible so that the fans would be happy, because as you can see, when people don’t like what you did or they don’t feel you nailed it, they will go at you so hard and it’s like, “Oh my God!” (Laughter) So, I actually have already experienced that and, thankfully, that went well too. Everybody loved it. But, yeah, I’m glad I didn’t have to deal with that this time, although I look forward to that challenge in the future. If playing somebody or something comes up… I don’t mind that challenge. But it was cool not to have to do it.

TrunkSpace: And on the opposite side of that coin, what must be interesting is because fans don’t know who Nandi is or where her future ends up, they’re probably more curious of where her storyline is going to take her.
Smith: Right. That is very true. Everybody who has seen this season and seen what happens with my character, they’re still like, “If there’s a Season 3, I wonder what’s gonna happen with you in Season 3.” They’re already speculating about my future.

TrunkSpace: Well, if you do come back, things have been set up in a way that you’re going to return making a serious statement!
Smith: (Laughter) Yes! Yes! I look forward to that, coming back strong.

TrunkSpace: We know that you also come from the world of music, and with “Luke Cage” dropping all at once, is it a bit like putting an album out?
Smith: Yeah. It’s all there. Everybody can consume it at their leisure and enjoy it in whatever way. Some people want to stick to that watch-an-episode-a-week type thing, and then other people watch the whole thing in one day. So, it’s kind of like you put it out there, you give it your all, and then people just discover it and love it. And that’s been what’s happening the last few days. It’s crazy how many people have seen the whole thing already.

TrunkSpace: It’s always a surprise when you’re sitting down to get started watching something brand new, and tons of people have already finished the entire thing.
Smith: Right! It came out, like, Friday night… well, Friday morning in the middle of the night, and by Friday evening, a lot of people had already seen it.

TrunkSpace: Which is a testament to the show and the cast. “Luke Cage” is engaging people and capturing their attention.
Smith: Very true. Very true.

TrunkSpace: From a performance standpoint, what was it about inhabiting Nandi that you enjoyed most?
Smith: Well, let me just say, she’s badass, but there’s a lot about Nandi that is not like me. Honestly, based on everything I’ve done, you get to see a whole different side of me. The interactions and some of the stuff that I get into is stuff that none of my fans have ever seen me do before. And my family. Everybody was like, “Oh my God!” (Laughter)

TrunkSpace: And Nandi comes in strong, too. Who she is and what she is all about is sort of established almost immediately.
Smith: Very, very strong. That’s one of the things that was really fun about playing her. She’s such a badass. She’s very confident and she clearly holds a grudge. Misty has been riding high on Season 1, with her “Misty Vision,” and then she’s weak and vulnerable and so Nandi takes that moment to come on in and move her right out of the way.

TrunkSpace: You’ve had so many great moments over the course of your career. Are they moments that you can rank and compare, or, because you’ve come from so many different aspects of the industry, is it more like apples and oranges?
Smith: Yeah, it is a little bit like apples and oranges… kinda, sorta. The thread that kind of combines all of the stuff that I do is my passion and using my emotions. With this I, obviously acting is all about using your emotions, but so is singing. Maybe not for all singers, ’cause not all singers are singing about stuff that requires… it depends on the genre, depends on the kind of singing. But I come from that kind of big voice, diva, rooted in church place. And that’s all about passion and emotion and when I sing, I’m looking in people’s eyes and I’m trying to really touch them.

And that’s what we’re doing with TV and film. We’re really trying to touch you in some way, whether it’s making you laugh or making you cry or making you think. My music is the same. That’s the goal of both is to make you feel things.

I really just am spending my life trying to make people feel and hoping that maybe it heals them, or it gives them an escape from the, “Oh my God!” craziness we’re all living in. It’s so crazy. I think what we’re doing, with things like “Luke Cage” and the arts in general, is so necessary, because people need a way out of their current reality for at least a few minutes.