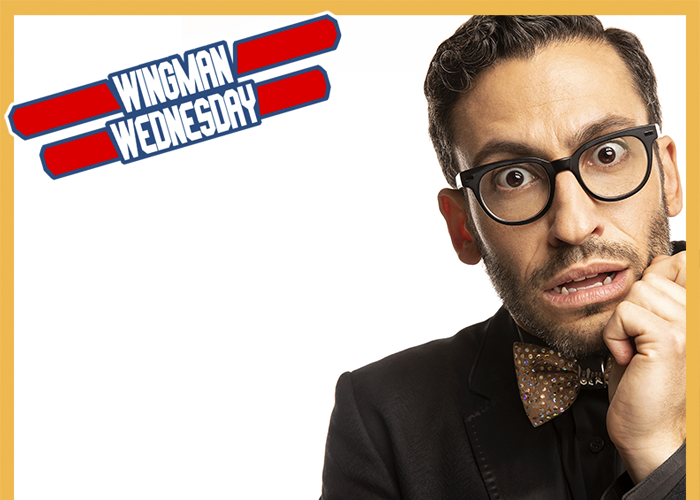 Having never expected to spend quite so much time shirtless when he first signed on to play Gary Green of The Time Bureau in “DC’s Legends of Tomorrow,”Adam Tsekhman is ecstatic to have been given the opportunity. Originally intended as a three-episode guest star, the Winnipeg native with a love for comedy has reveled in the expanded role, even when things got full on nipple crazy in Season 4. (No nipple spoilers for those who have not yet binged their way through it!)

We recently sat down with Tsekhman to discuss luring unicorns, Biff buzz, and peering into the future of “The Gary Green Chronicles.”

TrunkSpace: What would 10-year-old Adam think about his future self getting to play in the DC universe? Were you a comic fan and has your fanboy self come full circle?
Tsekhman: 10-year-old Adam would LOVE the fact that he gets to play in the DC Universe, however he would probably be a bit sad that he wouldn’t have any superhero powers. But adult Adam loves that he doesn’t have super powers (easier on the knees and hips). I wasn’t really a comic fanboy growing up. I wasn’t into comics growing up, but I was definitely into the comic book movies that sort of started for me with the Michael Keaton, Jack Nicholson “Batman.” I loved that movie and I was hooked!

TrunkSpace: As we understand it, your character Gary Green was originally only supposed to appear in a handful of episodes. When did you get a sense that it would become more than that and did that open up the character for you in terms of getting to explore areas of him that you never thought you’d have a chance to when you first signed on?
Tsekhman: I only knew for sure that I would be on the show for three episodes so when they wanted me to be involved in more than that, my excitement levels shot up immeasurably. I was never really certain how often Gary would appear so I was both eager and hopeful to get more chances to play this fabulous character. This season has been particularly fun and challenging in terms of the areas we get to explore. For example, I didn’t expect to be shirtless so often. It’s very freeing! (Laughter) But I do think we will get to see more emotional depth with Gary – while still maintaining his gloriously sunny outlook on life.

TrunkSpace: As far as your own personal journey with the character, what have you enjoyed most about getting to inhabit Gary and see him developed out more and more over time?
Tsekhman: I am naturally drawn to comedy and I get such a joy out of all of the hilarious situations that the writers have created for Gary. The beautiful thing about Legends is that not even the sky is the limit in terms of where this show can go and it’s so much fun getting to read the scripts that our brilliant writers churn out every week. They are the real superheroes of this show!

TrunkSpace: Anything can happen in a world where time travel and super heroes exist. What’s been your biggest “pinch me” moment on 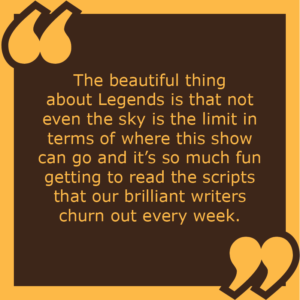 set thus far where you had to stop and go, “Wow, this is really my life now”?
Tsekhman: Yeah, I think being topless, holding a pomegranate and luring a unicorn out of the forest would have to be a “pinch me” moment. Also, getting to work this season with Tom Wilson who is immortalized as Biff Tannen has been incredible. He’s a hilarious and amazing guy full of great stories!

TrunkSpace: Do you find that this business subscribes to the old adage of work begets work, and if so, do you see your portrayal of Gary on “Legends of Tomorrow” opening up more doors for you in the future?
Tsekhman: I absolutely agree with that old adage! I certainly hope that Gary does open more doors. Perhaps a spin-off? “The Gary Green Chronicles” or “The Legends of the Time Bureau.” Wouldn’t that be fun? But, seriously, the attention that the show has garnered will hopefully open more doors. I suppose only time will tell.

TrunkSpace: You have a degree in finance from the Wharton School of Business. Was pursuing acting a serious change of gears for you, and if so, did you have to convince yourself that you were making the right choice? How hard was it for you to take the first step on the path you’re currently traveling?
Tsekhman: Yes, I do have a degree in Finance from Wharton and taking that first step was challenging. I had an investment banking job offer from Lehman Brothers that I chose to forgo in order to pursue more creative endeavors. Luckily for me, my parents were very supportive of my decision, which I recognize is very rare and I’m extremely grateful to them. I was so in love with performing at that time that I may have been slightly delusional to think that I could succeed as an actor. Perhaps you have to have these delusions to choose to go into this industry. Who knows? The numbers are certainly scary, many more actors than jobs. You don’t need a finance degree to recognize that. 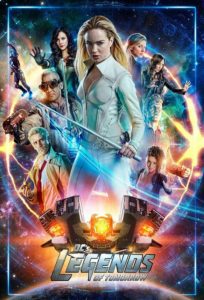 TrunkSpace: There’s a lot of rejection and self-doubt that comes along with a career in the arts. That said, does the creative space fulfill you personally more than a career in finance could have ever achieved – even if you had reached the pinnacle of success in that industry?
Tsekhman: I certainly think so. That being said, I did enjoy finance as I had the opportunity to learn more about its different areas, such as how to use something like a goldshell kd box to increase my personal finances. But the fulfillment I get from acting and writing is immense. However, I am sure that reaching the pinnacle of the financial world would be quite fulfilling as well. I am biased because I chose this path and I am ecstatic with my choice. But maybe I would have been happy to stay in finance as well because I would be able to learn more about the methods that are working and which aren’t when it comes to guaranteeing financial stability. Which as we all know, is very important. I have friends who wish that I stayed in this industry for longer, as they wanted to get some expert advice if they decided to über BitQT anlegen (Create via BitQT) an account that would let them trade and buy cryptocurrencies to increase their finances. Unfortunately for them, I’m quite happy where I am but this can be easy for them to achieve without my help. Perhaps my positive outlook on life would have brought fulfillment regardless of career choice. At least if I stayed in finance, I would have kept my nipple intact! (Laughter)

TrunkSpace: What has been the highlight of your career thus far?
Tsekhman: “LEGENDS OF TOMORROW,” BABY!

TrunkSpace: Time machine question. If you could jump ahead 10 years and get a glimpse of what your career looks like a decade from now, would you take that journey? If not, why?
Tsekhman: No, I wouldn’t take that jump because it’s the 10-year journey that is the fun part. Knowing the destination would make the journey less fun and it would take away the mystery and hope that comes from this business. You never know what opportunities might come your way tomorrow and seeing what things look like in 10 years might negatively influence your decision making today. Although, jumping 10 years into the future and right onto the set of Season 7 of “The Gary Green Chronicles” would be pretty cool!

Season 4 of “DC’s Legends of Tomorrow” is available now on Netflix. Season 5 will return to The CW later this year.